These nonfiction science books are just as (if not more) compelling as your favorite novels.

Ah, the science book! Dismissed as niche and nerdy, written off as intimidating, foreign, heady, weighty, think-too-hard-before-bed books, science gets a bad rap among fiction-lovers. But in the right hands, non-fiction can provide all the entertaining satisfaction of a great novel, and a little bit of knowledge to boot.

Here, we bring you our top handful of science books more compelling than fiction: a group of diverse books that all treat a heavy subject with lightness of touch, integrity of story, and captivating, page-turning prose. 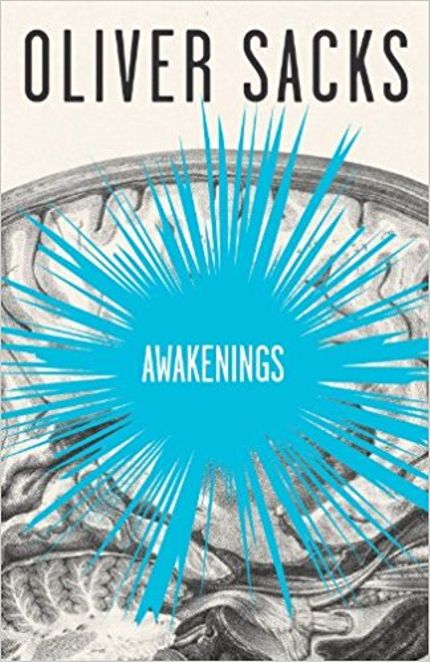 In what sounds like a plot torn from The Brothers Grimm, the early part of last century saw hundreds of people the world over struck with a mysterious epidemic, encephalitis lethargica, a.k.a. “sleepy sickness.” Under its spell, the patient would fall into a statue-like trance of non-movement and non-thought, remaining silent and still for decades. In the 1960s, Dr. Oliver Sacks, neurologist, psychiatrist, writer, and general jack-of-all-trades, treated many of these patients with the “miracle drug” L-DOPA, which had startling and often immediate reversal effects. As the patients “awoke,” Dr. Sacks intimately recorded their renewed personalities, their difficulties with the drug’s side-effects, and the process of re-emerging into waking life in a very changed world.

Fortunately, not only was Dr. Sacks a uniquely empathetic doctor, mentor, and therapist, he was also a remarkably thorough, careful chronicler of his adventures in medicine. Awakenings sometimes reads like a poet trapped in an academic’s body — it’s heavily annotated with footnotes, documentation, cross-references, and strings of gibberish-sounding pharmacology. But Sacks’ copious, colorful details and his exceptional, tender, sincere humanity rescues the book from textbook territory. The reader willing to plunge through Sacks’ loquaciousness will be rewarded with a miraculous story that is truly the stuff of fiction. 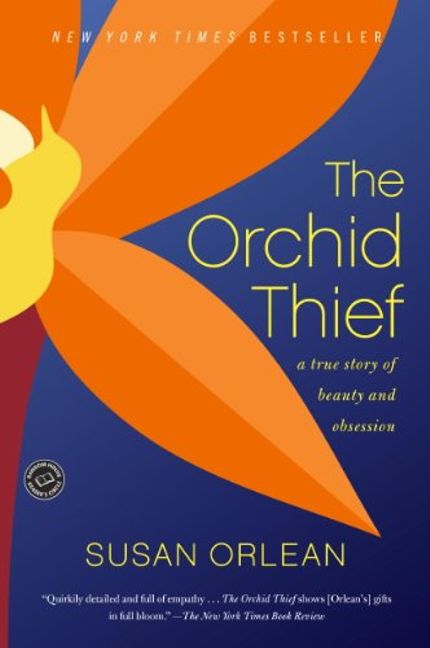 You may have seen the 2002 Oscar-winning film Adaptation, a faux-autobiographical tale of writer Charlie Kaufman’s attempt to create a screenplay out of Susan Orlean’s The Orchid Thief. In it, a writer's-blocked Kaufman (Nicholas Cage), is so crippled by the beauty of the book and his imagined vision of Orlean (Meryl Streep), that his script merges historical orchid-lore with tawdry Hollywood fiction, devolving into a mindbender of a meta-experience.

But underneath the unconventional film there is, in reality, this beautiful book: The Orchid Thief. Perhaps its book-jacket blurb reads tame: an examination of the black-market orchid trade and Florida swamp real estate. But beneath that skeletal outline, the story is an endlessly-compelling, gorgeously-written piece of deep, lovely journalism.

Orlean’s story is populated with colorful, real-life characters, like John Laroche, a dirty, scampy, rednecked, toothless purveyor of rare orchids, whom Orlean follows into Florida’s fetid Fakahatchee swamp seeking the coveted plant. But the novel’s main character is the orchid itself, this regal, delicate flower perched in the middle of the worst place on Earth—hot, sticky, stinky, forbidden swampland, surrounded by flies and larvae and leeches and ‘gators. What is it about this fussy little flower that exhorts men to explore deep into the jungle, to spend their fortune, to risk their lives?

It is impossible to speak about Adaptation without speaking about the beautiful book at its core, but it is possible to read The Orchid Thief as a stand-alone experience in compelling long-form journalism. Even so, the film (which Orlean reportedly adored) for all its eccentricity, does a remarkable job at capturing so much of what makes the book compelling—its honesty, its fragility, its tenacity, and its unexpected intimacy. 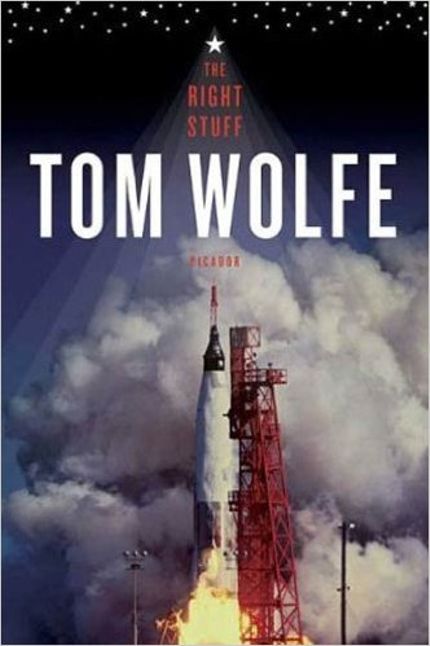 Writing for Vanity Fair, Michael Lewis (yes, that Michael Lewis, the Hollywood Midas behind The Big Short and Moneyball) recently examined legendary New Journalist Tom Wolfe, the pioneering staff writer who exploded long-form voyeurism into—if Lewis is to be believed—the most socially-influential non-fiction book ever written. On his way to visit Wolfe himself, Lewis speaks to his private-plane pilot about Chuck Yeager, the famous sound-barrier-breaking test-pilot of America’s aviation century. Of course Lewis’ pilot knows who Yeager is. And how? Why do we all know who Chuck Yeager is? Tom Wolfe.

Wolfe spent nearly a decade researching The Right Stuff, a comprehensive and endlessly-fascinating portrait of the Mercury Seven, the first men to become astronauts in the NASA space program. But Wolfe’s interest is sociological, not scientific: he profiles the astronauts, digging to uncover, in his words, “[w]hat is it, that makes a man willing to sit up on top of an enormous Roman candle, such as a Redstone, Atlas, Titan or Saturn rocket, and wait for someone to light the fuse?” The Russian space race provides the backdrop, of course, but the foreground is always the personalities of these men, their ambitions, their families, their backgrounds, their reactions, and how it is that they ended up with this unquantifiable “right stuff.”

Wolfe tackles a serious subject in his wholly-unique voice: east-coast-clever meets homespun-colloquial. He is frequently funny, often sarcastic, and always a little arms-length. The book is about industry, a burgeoning American identity, and colonization of the clouds. But it is also a venture into the deep science of social commentary as told by the original embedded journalist. Despite the dated subject, Wolfe’s sharp skepticism and deft turn of phrase makes The Right Stuff as enjoyable and relevant a read today as it ever was. 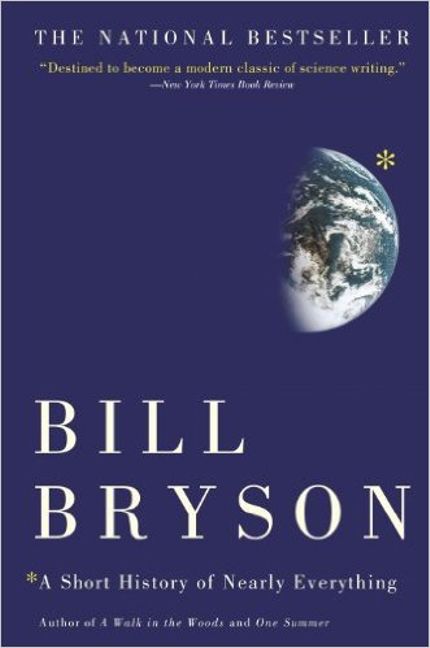 A Short History of Nearly Everything

Rarely does a title so aptly advise a reader what to expect between its pages. A Short History of Nearly Everything is just that: a highly-readable, highly-condensed narrative of time, space, the Earth, and, to a lesser extent, its newest inhabitants: people. This book is accessible where science is daunting; it is conversational where textbooks are erudite.

It begins, of course, with the beginning: the Big Bang, and walks through the convergence of particles into life and the evolution of that life into other life, tackling physics, biology, geology, adaptation, and natural disasters along the way. It’s a crash course in our planet and our origins, our place in the long history of time, and a reminder of the literal stuff we’re made of. Bryson, befuddled and irritated with his own lack of science knowledge, wrote this book for other readers his age who hadn’t been privy to a science class for decades—fruitful decades erupting with scientific discoveries and changes. Even so, Short History should not be dismissed as a text for the ill-equipped or the obsolete; rather, it’s a delightful refresher course for readers of any background to revisit an understanding of our universe.

A Short History of Nearly Everything 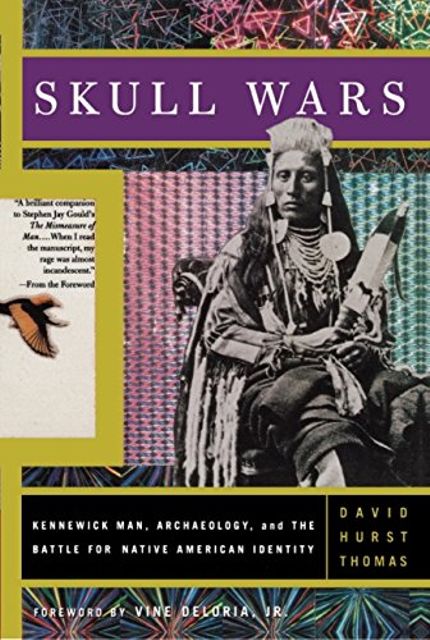 In 1996, two young men sneaking into an air show in Kennewick, Washington noticed something odd sticking out of the mud. A skull? A dead body? Dead is right: the skull, and later, a near-complete human skeleton that washed up on the river bank, was carbon-dated to be around 9,000 years old. This made Kennewick Man one of the oldest and certainly most complete skeletons ever found in North America.

This miracle of anthropology was quickly offset by a series of blunders, errors, inadvertences, prejudices, illegalities, irresponsibilities, insensitivities, and big mistakes. Being 9,000 years old, Native American tribes indigenous to the region asserted “ownership” of the fossil, intending to repatriate the bones with a proper burial. Scientists were outraged: how can you bury what may be the most momentous scientific discovery on this continent? But wait—examiners of the skull found that it had several characteristics leading them to believe that Kennewick  Man might have been … Caucasian? He’s not from a tribe at all, he’s a 9,000 year-old white guy?

On that footing commenced a decades-long battle over the future of these remains, and more, a debate over what it means to be “native” American. Skull Wars is the story of that conflict and the long history of scientific bias that set the stage for the showdown: the conquests of early settlers, the tragic clashing of American cultures, the history of modern anthropology, and the import of the artifacts we have to reconstruct these stories. Skull Wars is the readable, anecdotal, and often emotional tale of how our prejudices and beliefs shape ancient history as much as it shapes us.

Looking for more mind-expanding books? Sign up for the Early Bird Books newsletter and get the best daily ebook deals delivered straight to your inbox.