Gloria Steinem on Exterminate All The Brutes

Author Sven Lindqvist takes readers on historical journey across the Sahara Desert and the African continent.

If you only have time to read one book that proves the high price we have paid–and continue to pay–for being limited to a version of world history seen mostly through the eyes of colonizers from a small area called Europe, Exterminate All the Brutes is definitely it.

Beautifully written by Swedish author Sven Lindqvist—who recalls his own cruel childhood designed to toughen up boys to run empires—his combination of personal and political has been called “relentlessly readable.” He takes us with him on a trip into the Sahara Desert and the African continent, and makes it a journey of historical learning by referring to some of the hundreds of books stored in his computer.

He also uses what we already know as a bridge. If we read Joseph Conrad’s Heart of Darkness in school, he shows us that this novel was not fiction. Conrad himself was the riverboat captain he wrote about, and he actually witnessed the crazed colonial who displayed the heads of Africans on poles as a decoration in his flower garden. Conrad protected us with the idea that this was fiction. Lindqvist does not.

He also shows us that the past was no less complicated than the present. For instance, the British Empire was brutal, yet English newspapers and Queen Elizabeth herself grew alarmed by King Leopold of Belgium–who personally “owned” the Congo, an area larger than all of Europe—when he destroyed internal governance with guns, compelled slave labor with multi-headed razor whips and starvation, and enslaved women and children until their families killed off enough elephants to supply the global market for ivory. A Congo Reform Movement forced King Leopold to make a public relations tour of Europe, but he was saved by Queen Victoria’s distraction by her own Colonial Jubilee, by the many similar skeletons in Europe’s colonial closet, and by the deep belief of the era that the eventual destruction of “the lower races” was a biological imperative of the future.

As Lindqvist points out, this belief in white, European supremacy had already justified, “the extermination of Native Americans in the United States, of the Hottentots in South Africa, of the inhabitants of the South Sea Islands, and of the natives of Australia. A similar extermination was going on in the Congo.”

Original cultures, from the Kwei and the San in Africa to the Cherokee Nation in North America, warn us that, It takes four generations to heal one act of violence. Even without such wisdom, I doubt that any reader can leave this book without feeling anger that we see news about, say, violence in the Democratic Republic of the Congo without reference to its long history as a Belgian colony; a regime that ended only in 1960. Or without feeling anger that our own knowledge of North American history is way more likely to begin with the European arrival than with the 20,000 years of human history that led to the Iroquois Confederacy, the model for the U.S. Constitution. Then, Europe was still ruled by monarchs and popes. Even now, the U.S. hasn’t matched its model for the inclusion of women.

Want more great nonfiction? Sign up for the Early Bird Books newsletter, and get the best daily ebook deals delivered straight to your inbox.

Lindqvist also shows how the deep belief in racial inferiority that justified colonialism–from the so-called “white man’s burden” to the inevitability of what we now call genocide–came home to Europe as the Holocaust. What Hitler and the National Socialists ordered within Europe, they had grown up seeing foreshadowed and justified by genocidal colonialism on other continents outside Europe.

Though he doesn’t quite spell out the connection between the colonization of female bodies within the patriarchal family–or the brutalizing of males into a “masculinity” that breaks the bonds of empathy with females—he is more than honest enough to let us see how his own childhood beatings created empathy for the colonized, yet were not enough to break his spirit or convince him he had only two choices—to be the tortured or the torturer.

When I started this monthly blog, I wanted to highlight books, past and present, that met one requirement: a reader was not the same person after reading each one than she or he was before. For me, this is definitely true of Exterminate All the Brutes: One Man’s Odyssey into the Heart of Darkness and the Origins of European Genocide.

In this case, I’ve also found that it has a big impact on my view of what’s possible in the future.

There seem to be two big underground magnets in our national childhood: the ninety percent genocide of the original inhabitants of the Americas—still the biggest genocide in history—and an imported slavery justified by racial myths that linger long after slavery itself. I think a person or a nation doesn’t stop repeating the patterns of childhood until they have been uncovered, recognized, and de-magnetized by scrutiny, insight, a new consciousness; until they no longer feel like home. Just as the body produces a scar to protect the site of a wound, I think we, too, become stronger at the broken place.

For instance, a new majority consciousness now supports equality, yet there is also a backlash embodied in the murders in a Charleston church, in anti-immigrant campaigners, in an economic polarization almost as great as the Depression, in men who are the most likely killers and abusers of the women in their lives, and in patriarchal religions that reward an earthly hierarchy with an unprovable afterlife.

Exterminate All the Brutes should be part of every high school and college curriculum. By filling in a very incomplete history, it helps us de-normalize and uproot hierarchies based on who we are, not what we do.

I know that God is in the details, but the Goddess is in the connections. This book helps us make them.

Exterminate All the Brutes 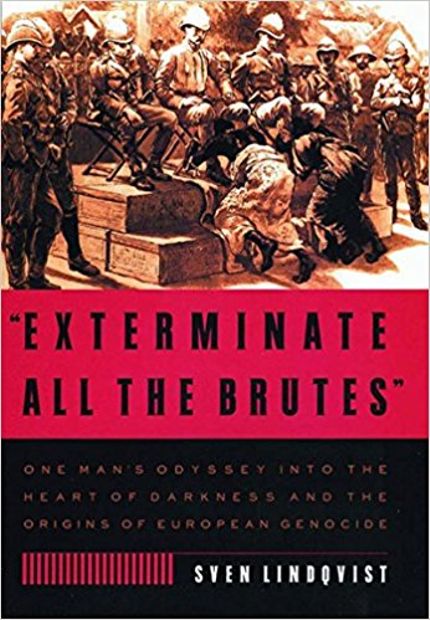