Gloria Steinem on Domestic Violence and Next Time, She’ll Be Dead

October is Domestic Violence Awareness Month. This is a revolution in itself. Until I was in my forties, we didn’t have a word for domestic violence, much less a month. It was just called “life.” If police were called, they might come to halt the disturbance, but their definition of success was getting the victim and the criminal back together again. And even when a woman was murdered by her husband or lover, there was some suspicion that she had been unfaithful or otherwise disobedient, and was the cause of a very gendered and inevitable event known as “a crime of passion.”

This was part of our very patriarchal legacy from English common law. A murderer who used, say, infidelity as an excuse could get his charge lowered from murder to manslaughter. Indeed, in some jurisdictions, the joke was that the wronged husband was released with $50 and a new suit of clothes.

I say this to assure you that we’ve come a long way from laws that stopped at the household door in the name of privacy, considered a husband and wife to be one legal entity, and thus deprived women of the freedom from bodily harm that was otherwise protected in law. It’s important to keep a grip on how far we’ve come as we use this month to teach such facts as these:

There have been many books written about domestic violence and they have helped to change consciousness and police practices; to pass and re-authorize the Violence Against Women Act, to lobby for state and federal funding for hotlines and battered women’s shelters; to introduce the Battered Women Syndrome as a recognized legal self-defense, and to overcome an anti-feminist rightwing position that calls shelters “Runaway Wives Centers” and believes women are either at fault for not obeying the men in their lives or are as likely to batter them as vice versa.

But if you can honor this hard-won month by reading or re-reading one book, I recommend Next Time, She’ll Be Dead by Ann Jones.

Want more insightful nonfiction? Sign up for the Early Bird Books newsletter, and get the best daily ebook deals delivered straight to your inbox.

For one thing, she herself grew up in a family of violence, so she knows the cycle of assault and contrition that can cause victims to believe they are at fault, or that their own good behavior might alleviate their fate, or that the bonds of love and family are more important than their own safety and freedom. As she writes, “My father was a drunk, a wife beater, and a child abuser. That’s never the whole story, of course, so he was also other things: a modestly successful businessman, a civic leader, a war hero, an athlete, a prizewinning angler, a churchgoer, a tenor, a patriot, a Republican, a baseball fan, a formidable player of gin rummy.” It’s with whole truth like this that she alerts readers to the fact that dangerous and abusive men don’t come with a sign that the victim should be able to read.

For another, she writes about the whole problem of violence inside the supposedly private world of the family, and she does, “begin at the beginning to explain where some of the sticking places are, and why—despite all our good will—we slide backwards.” She knows this extreme imbalance of power between males and females—of every race, caste or class—is buried deep within a patriarchal system in which males must control reproduction, and therefore the bodies of females. It is not going to be uprooted easily.

She also illuminates domestic violence by its parallels with other forms of physical and psychological servitude. As she writes, “The fundamental difference between marriage and slavery is that most battered women can and do leave, although, like slaves who fled, many are pursued by men who would capture or kill them. Hence the modern underground railroad.”

And she outlines the ways in which the law itself may address, punish and diminish battering, but also may contribute to it: for instance, making the victim leave her home for a shelter, but leaving the victimizer quite comfortable there, or obtaining a piece of paper called a restraining order; something that helps with a future prosecution but may only serve to enrage the batterer at the time.

Finally, Ann Jones ends with practical actions—for women and men—in understandable, spine-stiffening terms. For instance: “Stay away from a man who disrespects any woman, who wants or needs you intensely or exclusively, and who has a knack for getting his own way almost all of the time … prepare yourself as best you can with education, training, and job skills to lead an independent life … report [violence or harassment] to officials and talk about it to other women. If officials take no action, talk about that, too … volunteer to help at a battered women’s shelter … It’s important for men to take action to end male violence as well … 70 percent of the victims of male violence are other men … male violence is the problem of men … just as racism is the problem of white people …”

This is a mind-blowing, sanity-saving, revolutionary book. If you read Sex and World Peace by Valerie Hudson et al, as recommended in an earlier blog, you will also know that violence against females is the biggest indicator and normalizer of all other violence. Perhaps “domestic violence” should be called “original violence.”

Read this book as a place to start a spiral of change that won’t stop. As Ann Jones concludes: “Things change when people stop being resigned to things as they are.” Let her words enter your life, and it will never be the same.

Next Time, She'll Be Dead 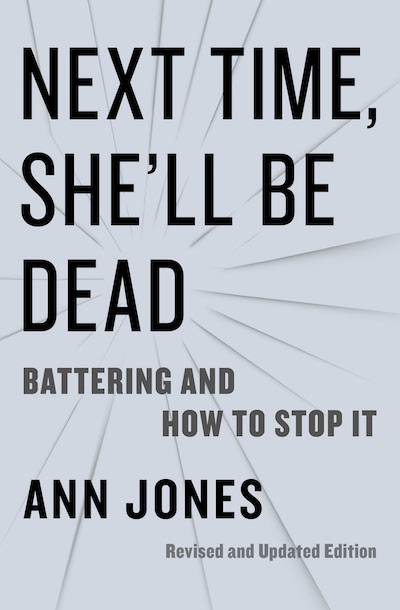