A look at The Waste Land author’s initial drafts and unpublished poetry.

A brilliant mind of the 20th century Modernist movement, T.S. Eliot amassed an extensive repertoire as an essayist, poet, publisher, playwright, and literary and social critic. He provided major contributions to the English literary canon—from influencing the school of New Criticism to channeling his creative energies into playwriting. A longtime critic and admirer of Elizabethan and Jacobean verse drama, his plays often consisted of allusions to Thomas Middleton, Thomas Kyd, and William Shakespeare.

While Eliot enjoyed relative success in other sectors of literature, none compare to his feats in poetry. Carefully crafted, Eliot produced a relatively small number of poems. But the rich quality of his works make up for the short quantity, as he created powerful, moving images filled with worldly references. Eliot traded in excessive Victorian structure for compact, lyrical poems that reimagined diction, meter, and themes. It is Eliot’s meticulous attention to fragmentation and broken structures that make him one of the 20th Century’s greatest poets.

Though he was American-born, Eliot became a British subject at the age of 39 and renounced his American passport. In various interviews, he maintained that both his nationality and naturalization influenced his writing. Awarded the Nobel Prize in Literature in 1948, Eliot will forever be remembered as one of the most influential poets of modern times.

Inventions of the March Hare is a collection of Eliot’s previously unpublished early works, including drafts of now-famous poems like “The Love Song of J. Alfred Prufrock,”and provides an unedited look at the critically-acclaimed writer. Many of Eliot’s poetry flowed as stream of consciousness; and finally, we ourselves can dive into the inner workings of Eliot’s own mind. Inventions of the March Hare voices youthful curiosity and minute observations on American society in Eliot’s unique timbre.

Read on for an excerpt from Inventions of the March Hare, and then download the book. 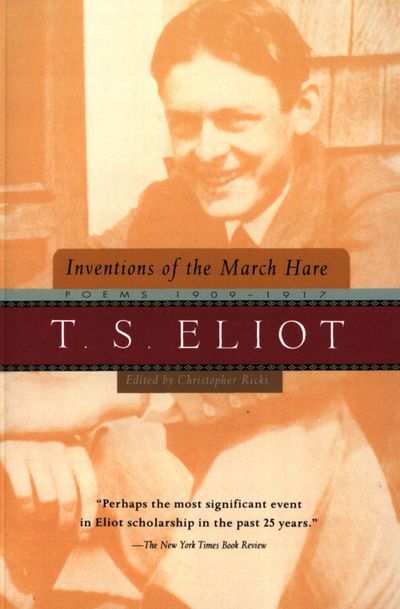 (Prufrock among the Women)

When the evening is spread out against the sky

Of restless nights in one night cheap hotels

And sawdust restaurants with oyster shells:

Let us go and make our visit.

In the room the women come and go

The yellow smoke that rubs its muzzle on the window panes

Licked its tongue into the corners of the evening

Lingered upon the pools that stand in drains

Let fall upon its back the soot that falls from chimneys;

And seeing that it was a soft October night

Curled once about the house, and fell asleep.

And indeed there will be time

For the yellow smoke that slides along the street

Rubbing its back upon the window panes;  [25]

To prepare a face to meet the faces that you meet;

There will be time to murder and create,

And time for all the works and days of hands

That lift and drop a question on your plate:  [30]

Time for you and time for me,

And time yet for a hundred indecisions

And for a hundred visions and revisions

Between the taking of a toast and tea.

Want more poetry? Sign up for the Early Bird Books newsletter and get the best daily ebook deals delivered straight to your inbox.

And indeed there will be time

Time to turn back and descend the stair

(They will say “How his hair is growing thin!”)

My morning coat, my collar mounting firmly to the chin

My necktie rich and modest, but asserted by a simple pin—

(They will say “But how his arms and legs are thin”)

In a minute there is time

For decisions and revisions which a minute will reverse . . .

I have known them all[…]

The eyes that fix you in a formulated phrase

And when I am formulated sprawling on a pin

When I am pinned and wriggling on the wall,

Then how should I begin?

But how should I presume?

Arms that are braceleted, and white, and bare

(But, in the lamplight, downed with light brown hair)

That makes me so digress?—

Arms that lie along a cushion, or wrap about a shawl.

And should I then presume?..

This is a draft of the first professionally published poem by Eliot, which was featured in the June 1915 issue of Poetry after much insistence from fellow poet Ezra Pound. However, this version of “The Love Song of J. Alfred Prufrock” is a raw outline of what would become one of Eliot’s most-celebrated poems. Inventions of the March Hare closely resembles Eliot’s notebook, filled with copious notes and in-depth descriptions. Despite lacking the ability to dramatize, Eliot’s ingenuity and creativity is ever-present.

“The Love Song of J. Alfred Prufrock” is multidimensional through its themes and structures. On the surface, the poem is about a sexually frustrated middle-aged man who laments his inability to confess his romantic feelings to his love interest. However, many argue that Prufrock is actually trying to impart philosophical insight or even voice his own disillusionment with society.

Throughout the poem, Prufrock focuses on his physical and intellectual idleness, his missed opportunities in life, and his incompetence to attain carnal love. The character feels regret, embarrassment, longing, and weariness, but is it because of an unrequited love? Or is he admitting that success promised by modern society only leads to a loss in humanity? Eliot uses Dante, the Bible, and Shakespearean plays to construct the structure of the poem. Consisting of heavy topics and various forms of narration, this modernist poem allows for a variety of readings and interpretations, as the reader realizes that what we believed to be a disarray of shattered images is actually a carefully constructed collage of humanity.

Want more poetry? Sign up for the Early Bird Books newsletter and get the best daily ebook deals delivered straight to your inbox.