One of the Best Mystery Novels of 2018 is Finally Here

Stuart Turton's debut novel puts readers at the center of a murder mystery...with a twist.

Ever wanted to be apart of the investigation? Stuart Turton's new murder mystery novel, The 7½ Deaths of Evelyn Hardcastle, puts readers at the center of the suspense. Instead of seeing the crime from one character's perspective, Turton gives us the chance to see it from eight. "How?" you might ask...well, that's a part of the mystery.

Imagine knowing that someone is going to die and having to relive it eight days in a row. That’s the plight in which Aiden Bishop has been put. One morning, he wakes up in the body of Dr. Sebastian Bell—a guest at the Hardcastle family’s Masquerade, which is to take place at the Blackheath House. Aiden has no idea what he's doing there, nor any recollection of who he actually is.

Nineteen years ago, Charlie Carver, the family’s groundskeeper, murdered Thomas Hardcastle—son of Lord and Lady Hardcastle. Now, the Hardcastles have invited all the guests who were there that night back to Blackheath House for a special party to celebrate the return of their daughter, Evelyn—who's been living in Paris since her brother's death.

Waking up in a stranger’s body is one thing, but Aiden is thrown once more when he wakes up in yet another person’s body…and another and another. From guests to household staff, Aiden continues to find himself switching bodies. Soon, he learns that he’s there for a reason: to find Evelyn Hardcastle’s killer.

Confronted by a frightening masked figure referred to as Doctor Plague, Aiden learns that each night, at 11:00 p.m., Evelyn Hardcastle will die at the Masquerade ball—though her death won’t seem like a murder. Forced to repeat the days over and over, Aiden will have to use each of his new hosts as a means to find out who’s responsible. He has eight days to solve the crime…or else be destined to stay at Blackheath House forever, living this mystery on a repeating loop. It’s a race against time to find Evelyn’s killer…and he’s not the only one playing the game.

Set in the early 1920s, Stuart Turton’s debut novel will keep you up at night. Combining horror, the occult, and plenty of suspense, The 7½ Deaths of Evelyn Hardcastle is a unique mystery novel that puts you at the forefront of solving the crime. Twists and turns will keep readers frantically flipping the pages—awaiting the book’s startling conclusion.

Click here to read an excerpt from the point of view of Dr. Sebastian Bell.

Click here to read an excerpt from the point of view of Lord Cecil Ravencourt. 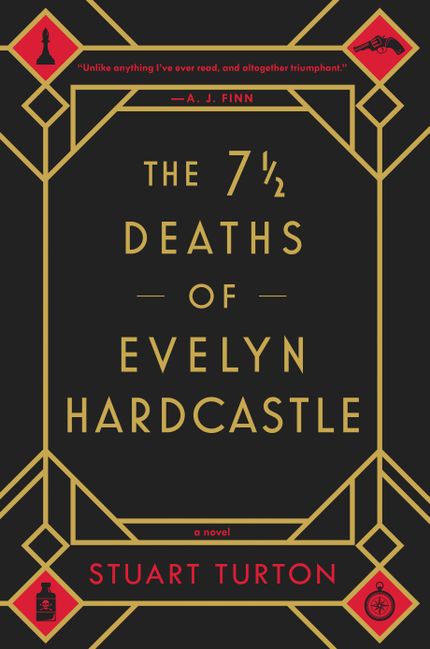