The Sacred Hoop: “Patriarchy is Neither Universal Nor Inevitable”

Perhaps the most powerful adversary of human possibilities is the belief that they don’t exist, can’t exist, and will never exist because they are contrary to human nature.

It is this we are supposed to believe when we are told that hierarchy has always been the way humans organized themselves, with men fighting for the top and women competing for their protection. Or that men have always owned women in order to own children, thus a patriarchy that is universal. Or that land has always has been a private possession and the cause of wars. Or that monotheism is an advance over pagan beliefs in the godliness of all living things.

This is exactly why reading The Sacred Hoop: Recovering the Feminine in American Indian Traditions by Paula Gunn Allen, Native American poet, novelist, mythologist, and activist, may make you more hopeful and more realistic about our possibilities. By teaching us lessons from the hundreds of advanced cultures that prospered on this North American continent—until Europeans brought disease, wars of conquest, and the biggest genocide in world history—Allen helps us to see that patriarchy is neither universal nor inevitable, but the first step in normalizing hierarchy. We also see that land has often been communally possessed and used, and that there are and always have been ways of solving conflict without war.

As she writes, “Feminists too often believe that no one has ever experienced the kind of society that empowered women and made that empowerment the basis of rules and civilization. The price the feminist community must pay because it is not aware . . . is necessary confusion, division, and much lost time.”

Want more inspiring nonfiction? Sign up for the Early Bird Books newsletter, and get the best daily ebook deals delivered straight to your inbox.

She explains: “Traditional tribal lifestyles are more often gynocratic than not, and they are never patriarchal.” Another term for what she describes is matrilineal, with tribal or clan identity flowing through the woman, husbands joining their wives’ households, and an absence of gender roles that divide human qualities and rob men and women of their full humanity. For instance, Cherokee and many other original languages don’t even have gendered pronouns of “he” and “she,” nor do they have a word for “nature,” since it includes all of us. And the primal symbol of society is not the pyramid of hierarchy, but the circle, the Sacred Hoop, in which all living things have value.

However, balance and equality doesn’t mean sameness in these cultures. Women were usually the growers of food and men the hunters, yet each was equally necessary and respected. A gynocratic or matrilineal society was not a matriarchy in which women dominated men. That perception may be a failure of the imagination, as if someone has to dominate. Instead, balanced societies were rooted in women’s control of their own bodies and birth-giving, through their knowledge of herbs, abortifacients, and timing. The Sacred Hoop is a reminder of why reproductive freedom has to be fought for over and over again, and why the adversaries of non-reproductive sex are the same, whether they are against birth control and abortion, or against sexual expression between women or between men.

The Sacred Hoop helps us to see why the withdrawal of God from women and from nature was a political process over millennia, and that it justified the conquering of women and nature. As Egyptologist James Henry Breasted wrote, “Monotheism is but imperialism in religion.”

Everything described in The Sacred Hoop existed as little as 500 years ago— a mere flicker in the 100,000 or so years that humans have been around. We can’t return even to this recent past, but we can know it as it once was and could be again. We might even insist on learning human history when humans began, instead of when patriarchy, monotheism, and nationalism did.

We honor Indian Country and ourselves by learning what once was and what could be.

As Paula Gunn Allen warned in her wise and mind-blowing way, “the root of oppression is the loss of memory.” 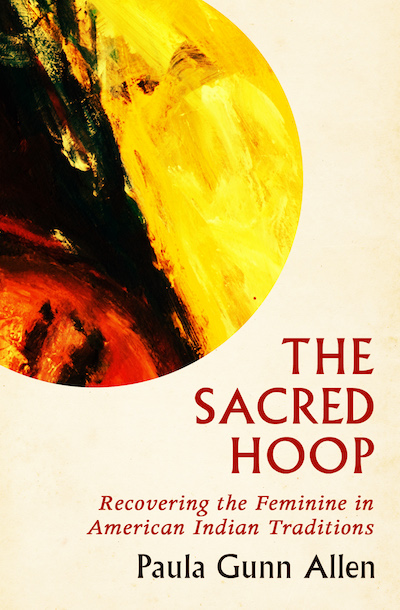