The Mermaid and the Minotaur: “The Uncle Tom’s Cabin of Men Raising Children”

Just as I was picking up a pen to write about why I hope you will read or re-read Dorothy Dinnerstein’s The Mermaid and the Minotaur (I don’t know about you, but I still write by hand before editing in an impersonal computer), I read in The Guardian about scientists at University College London who had discovered that women and men were equal in early societies.

With the aid of impersonal but voracious computers that simulated the conditions of hunters and gatherers living in small and portable camps, anthropologist Mark Dyble concluded that men and women were equal; this equality was a crucial factor that allowed us to evolve far beyond our primate cousins. “Sexual equality is one of a important suite of changes to social organization . . . Chimpanzees live in quite aggressive male-dominated societies with clear hierarchies. As a result, they just don’t see enough adults in their lifetimes for technologies to be sustained.”

This was one of many times I’ve wished that Dorothy Dinnerstein, a feminist academic, author and activist who died in 1992 at the age of sixty-nine, was still with us.

As Andrea Migliano, the senior author of the study, explained, “Sex equality suggests a scenario where unique human traits, such as cooperation with unrelated individuals could have emerged in our evolutionary past.” This conclusion was born out by qualitative studies in such current hunter-gatherer societies as those in the Philippines, where women hunt and collect honey. Though there is a division of labor, women and men supply a similar number of calories to sustaining the group. Monogamy is the norm, and men take an active part in childcare.

At its most immediate and activist level, her great book, The Mermaid and the Minotaur is the Uncle Tom’s Cabin of men raising children. When men did this for most of human history, they developed the human qualities now wrongly called “feminine” – patience, attention to detail, flexibility, value for human life; everything that comes from raising, or being raised to raise, children. Since women were equally responsible for the survival of the group itself – gathering foods, hunting with nets, creating shelters and the like – they were also able to develop those universal human qualities now wrongly called “masculine.”  In other words, both could be fully human.  The violence that remained was greatly reduced, and in self-defense.

As a result, males didn’t create or fall into the later patriarchal trap of men controlling reproduction – and therefore the bodies of women – thus normalizing from our earliest childhood experience the idea of active and passive, subject and object, dominator and dominated that would become the normalizer of other dominations based on geography, race, class and other visible or created differences. It would become the Cult of Masculinity and the Cult of Femininity.

See what you think, but in my experience, reading The Mermaid and the Minotaur is enough to convince you that men raising children – and boys being raised to raise children, as girls are, whether either will choose to have children or not – is nothing less than the long term and only reliable path to peace. That is, the peaceful settlement of the conflicts we can no longer afford in this nuclear age on a fragile Space Ship Earth.

And that is only its first lesson. Like all great books, it has many levels.  As feminist scholar Ann Snitow writes in the summary of her essay, “Thinking About the Mermaid and the Minotaur:” “As the result of this first memory of ‘Woman’ . . . as all-powerful provider . . . she has always been defined as a quasi-person, a sort of infinitely exploitable natural resource which, like nature, has the power to turn nasty but which is bounteous when controlled.”

If our long childhood is democratic, everything else will be.  And if it isn’t, we may all pay the price. That’s why this book is a game-changer.

Download The Mermaid and the Minotaur by Dorothy Dinnerstein. 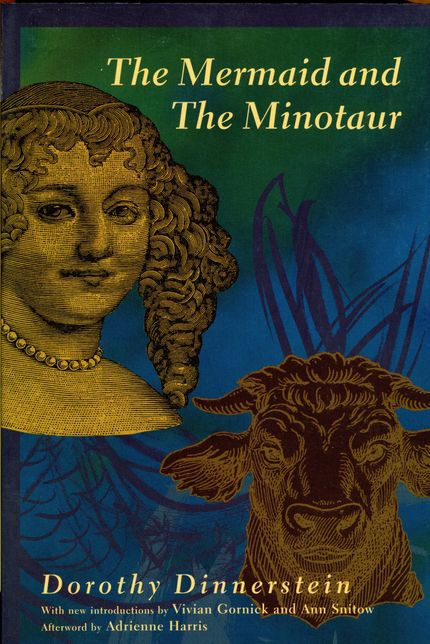 Featured photo: "Hylas and the Nymphs" by John William Waterhouse (1968) courtesy of Wikipedia