One writer listens to 150 hours of the four-volume LBJ biography so you don't have to. 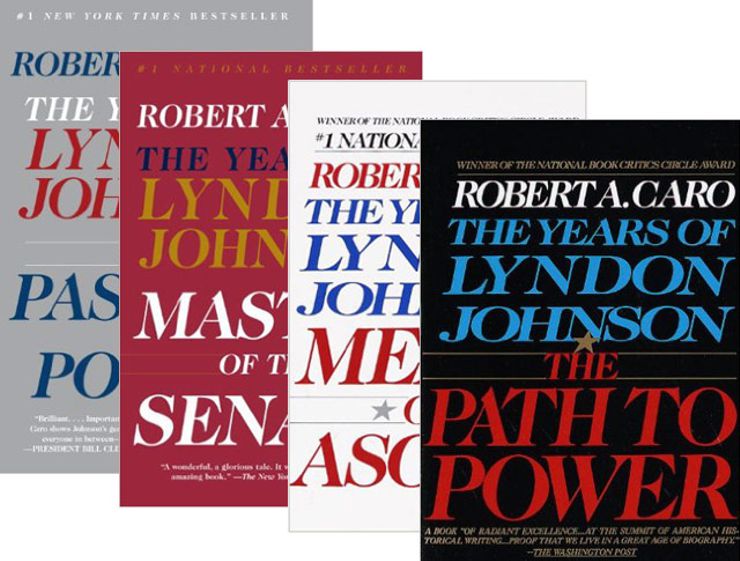 Since June, I’ve spent almost 150 hours of my life—more than six full days—listening to the four published volumes of Robert Caro’s (unfinished) series The Years of Lyndon Johnson. I’ve fallen asleep to stories of how, as a child, Johnson would make his mother dress him in a miniature version of his adored father’s suit, topping the outfit off with a pint-sized cowboy hat. I’ve walked to and from the subway contemplating legislative procedure. I’ve learned about the soil in Texas and the rules in the Senate and more about Lyndon Baines Johnson’s body than anyone should really know. Below, 11 of the weirdest, saddest, most surprising and bizarre facts I won’t ever be able to forget about our 36th president.

1. The expression “I’m going to take my ball and go home” is usually used figuratively. In Lyndon Johnson’s life, it applies literally.

In the impoverished Texas Hill Country where Johnson grew up, baseballs were rare—too expensive—and young Lyndon was often the only child who owned one. So when Johnson insisted on pitching, the other boys would let him—though he “wasn’t worth a damn”—knowing that if they didn’t, the little punk would literally take his ball and go home.

2. As a congressman, Johnson signed letters to constituents until his hands bled.

During his years in the House of Representatives, he developed a rash on his hands that made them “dry, scaly, and painful.” The rash got so bad that he took to wrapping his fingers in gauze and keeping a bowl of Lubriderm, into which he would frequently plunge his aching hands, on his desk. The condition made his skin especially susceptible to paper cuts, so he got into the habit of signing letters with his right hand “wrapped in a hand towel to keep the blood from dripping.”

3. Everyone in the Johnson family had to have the same initials—even the dog.

As a congressman in the 1940s, Johnson quickly became one of President Franklin D. Roosevelt’s protégés; one of the many lessons he took from FDR was the importance of having recognizable initials. Luckily, Johnson and his wife, Lady Bird, already shared a set. When their daughters were born, the tradition was continued: the first was named Lynda Bird and the second Luci Baines. The family dog, too, had to be an LBJ: Little Beagle Johnson.

Running for the Senate in 1948, campaigning his way across Texas in the summer, his aides often worried about having enough shirts on hand, as well they should have: he would sweat through six or seven a day.

5. Johnson once tried to jostle a kidney stone loose by having an aide drive him over bumpy roads.

During that same ’48 campaign, Johnson developed a kidney stone that he could not seem to pass. Unwilling to have surgery—which would have taken him off the campaign trail for several weeks—he tried all kinds of tricks to move the stone, including being driven up and down bumpy roads in the hopes that the jolting of the car would help the stone along. (It didn’t work. The stone was eventually removed via an experimental medical procedure that involved threading a thin tube up through Johnson’s penis and into his ureter.)

All of them (and many more for Johnson) were likely cast fraudulently. When his opponent, Coke Stevenson, sent a supporter—Frank Hamer, a former Texas Ranger—down to the precinct in question to investigate, Hamer found himself faced with a squad of armed Mexican pistoleros. The pistoleros had been dispatched by the South Texas political boss who had rigged the election in Johnson’s favor.

7. Johnson once kicked Senator Hubert Humphrey in the shin.

As Senate majority leader, Johnson proved an exceptional political tactician. When he wanted a bill passed, he would stop at nothing, manipulating obscure rules to thwart his opponents, trading committee seats for votes and, when all else failed, compelling obedience in Democratic ranks through sheer physical force. Once, during a vote on the floor, Humphrey was literally moving too slowly for the majority leader’s liking: frustrated, Johnson kicked him in the leg. The next day, Humphrey—a personal friend of Johnson’s and later his Vice President—proudly lifted his pant leg to show off the bruise.

8. “None of the body parts customarily referred to as ‘private’ were private when the parts were Lyndon Johnson’s.”

Johnson famously named his penis “Jumbo,” and, as a congressman and later as a senator, he could be remarkably crude in both speech and gesture. He had no qualms about scratching his crotch or his rear end—“quite deeply into his rear end”—in mixed company. A congressman remembers him pulling down his pants to show off a hernia scar in his office. “It didn’t matter if there was a woman there,” the congressman recalls. “He’d pull up his scrotum while talking.”

9. He likened passing the 1957 Civil Rights Bill to taking a girl’s virginity.

The 1957 Civil Rights Bill he passed while majority leader was the first such measure to make it through the Senate in decades. Though the bill wasn’t particularly strong, Johnson argued adamantly for its passage: “We’ve got to break the virginity,” he’d explain. “Once they do it the first time, it won’t be so hard to get them to do it the second time.”

10. The patrician Kennedys came up with cruel nicknames for the less sophisticated Johnsons.

Robert Kennedy’s hatred of his brother’s vice president was so pronounced and well known that he was once presented with a Johnson voodoo doll at a party. And while not everyone loathed Johnson as Bobby did, Johnson’s southern accent and humble origins did make him a figure of ridicule in the Kennedy White House. On his own, Johnson was sometimes called “Rufus Cornpone.” As a couple, the Johnsons were known as “Uncle Cornpone and his Little Pork Chop.”

11. Johnson was not a good dancer.

At a long, late, champagne-fueled dinner-dance at the White House in the early ’60s, Johnson attempted to do the twist. Unfortunately, he slipped and fell on top of his partner, a beautiful woman who also happened to be the President’s mistress. It was a long few minutes before Johnson could be helped to his feet and his dance partner rescued.

Miranda Popkey is the Assistant to the Editor at Harper’s  magazine.