Frances and Bernard begs the question: What if these close writers had been more?

In 1949, writers Flannery O’Connor and Robert Lowell met at an artists’ community in Saratoga Springs, New York. Though they made an unlikely duo—O’Connor was a religious Southerner in her twenties, and Lowell was a 31-year-old atheist from an elite Boston family—the two became fast friends. While declarations of love peppered the letter correspondence that they kept up for more than a decade, O’Connor and Lowell were hardly more than penpals.

Carlene Bauer reimagines their story in her debut novel, Frances and Bernard. For inspiration, Bauer drew from the hundreds of letters the two writers exchanged before O’Connor’s untimely death in 1964. The result is a poignant novel that explores what it would have been like if the two writers were not just friends, but lovers. Though the novel is a fictionalized account of the relationship between O’Connor and Lowell, it is very much based on the real tenderness between the two that is evident in their correspondence.

Frances and Bernard is primarily a love story, though it also explores other potent themes, such as philosophy, art, mental illness, and the sacrifices women make when forced to choose between their personal lives and their careers—all very real issues that O’Connor and Lowell had to grapple with. Read on for a touching excerpt from Frances and Bernard, in which the writers are getting to know each other—from stories about previous relationships to favorite books. 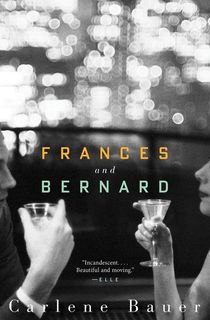 Bernard, I am not jealous. I believe that thought, to borrow a phrase from Sr. Weil, is a creature of your imagination. I laughed out loud when I read it. Oh, Bernard. Surely you know not every girl’s worth looking at. And not every girl is a jealous girl. Surely in your net-casting you have discovered this. I wasn’t jealous. I was, I repeat, being judgmental. You were two people playing at affection, it seemed, and as someone who reserves affection for only a select few, I thought this comfort on the stage was a little disturbing.

But this was before I knew you. I have to admit that at lunch that day, and for some time after, I had an idea that you might be something of a cad. I don’t think you’re a cad now. But perhaps there is too much of Augustine in you!

I do have great affection for Augustine, even if I don’t understand his appetites and the power they had over him.

Related: Why We Wish Flannery O'Connor Was Our Friend

I’m going to read that last line of your last letter to mean that you also have great affection for me. This pleases me immensely.

Unfortunately, I have been a cad. Blindness makes for caddishness. Cruelty’s not the only way to be a cad. Although I have been cruel too.

I am curious—have you ever singled out someone for your affection? I’ve been wanting to ask this. Do not misunderstand my tone here; I ask with all the tenderness and innocence of a brother. Imagine me asking: Frances, what did you read as a child? And that is how I am asking this question.

You have made me uncharacteristically circumspect. I like that very much.

There was a young man for whom I had affection at Iowa. He is now married to the woman who was my best friend at the time. That is all I will say about that.

Except to tell you that I found my dearest friend, Claire, because of this young man. I was in the ladies’ room during a dance crying in a stall because the young man had chosen this particular evening to break it off, and Claire happened to be in the next stall over. I kept flushing the toilet because I didn’t want anyone to hear me, because I was so ashamed of crying over him, and in public, but she heard the keening of self-pity above the tsunami of flushing and knocked on the stall. “Are you all right over there?” she said. “Can I get you some water, or an aspirin, or a drink?” I didn’t answer right away and she said, “Are you crying over someone?” That made me cry even harder, and Claire came out of her stall, washed her hands, and waited for me. “I don’t want to tell you how many times I’ve cried in the ladies’ room at dances,” she said through the door. “It’s revolting, I know. You hate yourself for it.” I liked that she used the word hate. I came out of the stall and saw a tall blonde in an emerald-green shantung shift, her hair swept up on top of her head. She looked at me and said: “What a fetching dress!” I told her I’d made it myself. Now it’s two years later and I don’t know what I’d do without her. That was the first and last school dance I ever attended, by the way. I’d rather go to a funeral.

Now, tell me what you read as a child.

Want more historical novels? Sign up for the Early Bird Books newsletter and get the best daily ebook deals delivered straight to your inbox.

I’ve done some shabby things, but I’ve never thrown a girl over for her friend. I pray I never do. But it sounds like you won, in the end, if such a thing as Claire transpired shortly after.

Permit me to lecture for a moment: Uncle Bernard says that unless you, like Kierkegaard, are desiring and capable of basing a whole system of philosophy around this rejection, you should fall in love again. And again and again, if you have to. It is one of life’s greatest pleasures.

I can hear your eyes rolling all the way up here in Boston. Your blue, blue eyes.

As commanded: here is what I read as a child, ranked in order of moral and aesthetic influence.

The Bible. All the way through at seven years old and then repeatedly, daily, as of noon today, at breakfast. Psalm 51. King James Version.

Paradise Lost. At eleven years of age. My affinity for the devil was almost as terrifying to me as the idea of him.

The Iliad and The Odyssey. Eight. With these words he led the way and the others followed after with a cry that rent the air, while the host shouted behind them.

Dickens’s A Child’s History of England. At seven. I began by imagining myself as Alfred, but by the end worshiped Cromwell, because he was a Puritan, too, and I drafted the neighborhood boys into a New Model Army. There was a mutiny soon after, I don’t think I need to tell you, that sent me indoors for the rest of the summer reading—

Brothers Grimm, Hans Christian Andersen. Read them over and over when I was six, which is when I decided that I wanted to marry a mermaid. I had a habit of swimming too far out to find them and would have to be dragged bodily out of the Atlantic by my father. After one of these episodes, while I shivered on the sand wrapped in a tartan blanket, I heard my grandmother, my mother’s mother, who sat immobilized beneath a parasol like an iceberg dressed in black, more tartan blankets covering the diabetic gangrenous foot that I was always told to keep out of the way of, say: “The only way you’re going to get that boy to behave is by running him over with a car. Pity you can’t.” And then she winked at me. I have often thought that my father was frightened by what he imagined was the beginning of the disease of lovesickness—the same disease that had had him panting after my mother, who by this point in their marriage had turned like milk; now she was a materialistic withholding scold. But I more than made up for whatever softness he feared by a period of prepubescent pugilism, a reign of terror in which I pulped anyone who wouldn’t let me take charge or have my way. This subsided, mostly, in high school, though I did, my first year at Harvard, throw a punch at Ted. I missed. He, in response, knocked me out. This is why I conscripted him into a friendship. We cannot for the life of us remember why I threw a punch at him. Ted likes to say it was because we showed up to the bar wearing the same dress.

When I ask my freshmen what they have read, they all stare at me for a moment, and then talk about television and comic books. Could a gap of eight or so years really make that much difference? I suppose you and I could have been listening to cereal-sponsored serials on the radio, but we didn’t—or did you? I can tell you, however, that Superman is actually quite an amazing read, should you find yourself at a drugstore lunch counter with all the day’s papers sold out.

In this passage, much like the real Lowell, Bernard is eager to express his love and affection—even subtly. (Lowell was married three times in real life.) True to the woman she was based on, Frances is more shy and reserved—though fiercely intellectual. The writers often grappled with large ideas and gave each other advice on creating art and living life.

While Flannery O’Connor and Robert Lowell may not have been lovers in real life, their years-long friendship was as intimate and complex as Carlene Bauer portrays it in her novel. The characters may be fictional, but the powerful personalities of O’Connor and Lowell shine brightly through.

Want more historical novels? Sign up for the Early Bird Books newsletter and get the best daily ebook deals delivered straight to your inbox.