"Washington: The Indispensable Man" examines the character of the first President of the United States, and how the treachery of a man who he considered to be an ally shaped his future.

In all of American history, there are few turncoats more notorious than Benedict Arnold. But perhaps no one was more blindsided—or more disappointed—by the general’s surprise defection than Arnold’s stalwart champion, George Washington. Despite Arnold’s crippling battle injuries and disregard for authority, he had become a powerful military commander under Washington’s good graces. He was considered, above all, a trusted ally.

But Arnold had fallen under the spell of his wife, Peggy Shippen, whose pro-British sentiments would ultimately sow the seeds of his betrayal. Encouraged by Peggy and her Tory ex-fling, John André, Arnold launched a scheme that would win him command of West Point and give the Brits access to the Hudson River. When Arnold had at last manipulated Washington into giving him the title, the final steps of his rebellion fell into place.

In Washington: The Indispensable Man, National Book Award-winning author James Thomas Flexner recounts the life of one of America's most beloved Founding Fathers—including a look at Washington's personal life and how he initiated the democratic principals we value today. Firm but never cruel, compassionate but never weak—Washington handled the Benedict Arnold scandal with the grace that would one day make him president.

Read on for an excerpt from Washington: The Indispensable Man, and then download the book. 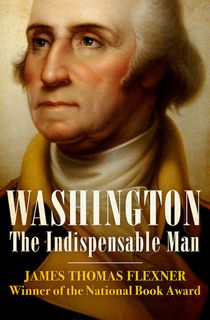 Arnold had commanded West Point for two months when Washington, on his way back from his depressing conference with Rochambeau, intended to inspect the fortress. He looked forward to spending a day and a night with the valiant officer and his very pretty wife. After a considerable ride, he arrived at their headquarters, some miles upriver from West Point, on September 24 for a late breakfast. He was dashed to be received only by an aide. Mrs. Arnold, he was told, had not yet arisen, and General Arnold had embarked in his barge on the river. The General had left word that he had gone to the fortress to prepare a reception for “His Excellency.”

Washington ate his breakfast with no emotions deeper than disappointment, and then himself set out on the river. Concern first appeared in his mind when, as the fortress that rose high on the right bank of the river loomed ever closer, he could see on the landing place only somnolently pacing sentries. There was no sign of the reception which Arnold had said he was going to prepare.

“As soon as Washington landed, he asked for Arnold. None of the officers had seen him that day. As Washington proceeded with his inspection of the various redoubts, he kept hoping that Arnold would appear. “My mind misgave me,” he later remembered, but “I had not the least idea of the real cause.”

Washington was back at Arnold’s headquarters in time to spruce up for a four o’clock dinner. Hamilton, who had been left behind to receive any dispatches that might come in, reported that nothing had been heard of Arnold. Peggy had sent word down that she was indisposed.

The party dispersed to their rooms. As Lafayette was dressing, Hamilton dashed in with the request that he attend at once on the commander. He found Washington trembling with emotion, a packet of papers in his hands. “Arnold,” Washington cried out, “has betrayed us! Whom can we trust now?”

The papers revealed that “John Anderson” had been stopped on his way from the American to the enemy lines, dressed as a civilian and hiding in his shoes papers in Arnold’s handwriting giving information which would assist the British in capturing West Point. There was also a meticulously written letter from “Anderson” which revealed that he was no common spy but a high officer. It stated, “What I have as yet said concerning myself was in the justifiable attempt to be extricated. I am too little accustomed to duplicity to have succeeded.… The person in your possession is Major John André, adjutant general to the British army.”

It was not clear how wide was the plot or how great the immediate danger to West Point. Although André had been apprehended, other messages might have got through. And the wind, blowing upriver, was perfectly angled to hurry British warships from New York Bay to the fortress, which might be secretly prepared for surrender. The obvious necessity was to take the precaution of changing commanders at key posts while at the same time putting West Point on the alert for attack. These things Washington failed to do. So great was the shock of discovering the perfidy of a man he had so deeply trusted that only one thing seemed important to him: capturing the traitor.

Two of Washington’s aides, who had arrived at Arnold’s headquarters in the early morning, remembered that he had received a message obviously disturbing to him. He had taken to the river. Enough time had passed since then for Arnold to have reached the anchored British warship from which André had previously disembarked. Yet Washington held on to the hope that Arnold had not been notified of the discovery of his treason and was somewhere in American territory where he could be captured. To keep the villain in ignorance, Washington resolved to make no move that would indicate that the plot had been revealed. He did nothing more than send Hamilton and a companion thundering on horseback down to King’s Ferry, the last outpost that could stop Arnold’s barge.

One of Arnold’s aides came up to Washington and reported that Mrs. Arnold seemed to have gone mad. She had been running through the upstairs halls almost naked, shouting that “there was a hot iron on her head, and no one but General Washington could take it off.”

Washington mounted the stairs. The beautiful young woman was now in bed, dandling her baby, raving, weeping, revealing, as her bedclothes parted, charms usually hidden. She paid no attention to the tall figure standing in the door. Arnold’s aide spoke to her: “There is General Washington.”

“No!” she cried, and denied that he was Washington.

Leaning over her with the greatest concern, he gently assured her that he was. “No!” she shrieked, gesturing to shield her infant. “No! That is not General Washington! That is the man who was agoing to assist Colonel Varick in killing my child.”

When Washington finally persuaded her of his identity, she accused him of “being in a plot to murder her child.” Her husband, she moaned, could not protect her. “General Arnold will never return. He is gone. He is gone forever, there, there, there: the spirits have carried him up there!” She pointed at ceiling. “They have put hot irons on his head.”

Finally Washington went downstairs. He felt all the more bitter against a traitor who had caused so lovely a lady such anguish.

Washington wandered around like a man in a nightmare. It was after six in the evening when a message came in from Hamilton reporting that Arnold had escaped to a British warship, from which he had sent two letters that were enclosed. The one to Peggy, Washington sent upstairs unopened with the message that, although it had been his duty to try to capture Arnold, he was happy to relieve her anxiety by telling her that her husband was safe. The other letter was addressed to Washington. He read it with rage, since Arnold contended that it was true patriotism which had carried him to the British.

Now, at long last, Washington took the steps which he should have taken hours before. In dispatches headed sometimes “seven o’clock,” sometimes merely “o’clock,” he prepared the army for a British assault. During the night, the wind changed, and the immediate danger was over.

Washington walked around like a man in a nightmare.

The next day, Washington had to face the painful problems of what to do about Peggy and what to do with André. The young wife (who had been in the plot from the start) need not have used such heavy artillery on Washington; he always labored to shield women from the rigors of war. The next morning, she admitted to no memory of her hysteria and stated quietly that she was utterly innocent. Washington accepted the statement without question. He sent her back to her father in Philadelphia.

To make the problem of André the more heartrending, the young officer behaved in his mortal danger with the utmost courage and the utmost charm. Washington was deeply touched, all the more because of André’s temperamental resemblance to Lafayette. Washington’s young aides, including Hamilton, were almost aswoon with sympathy for the prisoner. But a court-martial could not avoid the verdict that André had acted as a spy and must be sentenced to death.

Washington longed for some way to escape the inevitable. He could not pardon André out of hand without making it seem to American public opinion that the army was soft on treason. But supposing he could substitute on the gibbet the right man? Knowing that André was Clinton’s intimate friend, Washington sent unofficial (they could be no more) messages to his British opposite that he would be happy to release André if Arnold were made available for capture. But Clinton could not agree without torpedoing the whole British effort to win over American officers.

The most exquisitely painful issue then arose. Accepting his death as unavoidable, André asked to be shot (which was considered a gentleman’s death), not hanged like a varlet. But hanging was prescribed for spies, and Washington feared that changing the manner of death would give further ammunition to the British propaganda machine, which was already crying out that he intended to murder a legitimate prisoner of war. Although Hamilton growled angrily, “Some people are only sensitive to motives of policy,” Washington saw no way that he could interfere with the legally established penalty. It was for him a dreadful moment when the clock struck the hour of the hanging.

As Washington concocted an elaborate scheme—which misfired—to have Arnold kidnapped from New York City, the British tried to make every use of Arnold’s defection to disrupt patriot morale. The British propaganda machine ground out statements for Arnold which described his acts as true patriotism and tried, by opening up every sore that rankled in patriot minds, to induce others to imitate him. But hatred for the traitor swept the nation.

Washington’s investigations indicated (as was the fact) that there had been no widespread plot. Except for mean go-betweens, Arnold (and Peggy) had operated alone. Yet there remained a most dangerous issue. While in Philadelphia, Arnold had been supported by the conservatives, and he had long been a protégé of Washington’s. If guilt by association were accepted, the right wing of the patriot cause and the Commander in Chief would be tainted. It is terrifying to think what use a modern “super-patriot” rabble-rouser could have made of this issue. The radical Reed did take some initial steps, but then, frightened it seems by the possible consequences, stepped back.

Washington warned that witch hunts would serve the enemy “by sowing jealousies, and, if we swallow the bait, no character will be safe. There will be nothing but mutual distrust.” He labored to turn the popular emotion to gratitude that the plot had been foiled: “In no instance since the commencement of the war has the interposition of Providence been more conspicuous than in the rescue of the post and garrison of West Point from Arnold’s villainous perfidy.”

Love learning about history? Sign up for the Early Bird Books newsletter and get the best daily ebook deals delivered straight to your inbox.