Food writer Laurie Colwin got her start working for a literary agency and living in a “minute” New York apartment. “It is lucky I never met Wilt Chamberlain,” she writes, “because if I had invited him in for coffee he would have been unable to spread his arms in my room, which was roughly seven by twenty.” An aspiring writer herself, Colwin sold her first short story to The New Yorker when she was just 25. She eventually published eight novels, and a passion for food writing, and a column at Gourmet magazine came later. These columns were later collected in Home Cooking, published in 1988, gaining Colwin a devoted fanbase that would last long after her tragic and sudden death at the age of 48.

In this excerpt from Home Cooking, Colwin reflects on one of life’s greatest pleasures: the art of dining alone … (in a very tiny apartment). 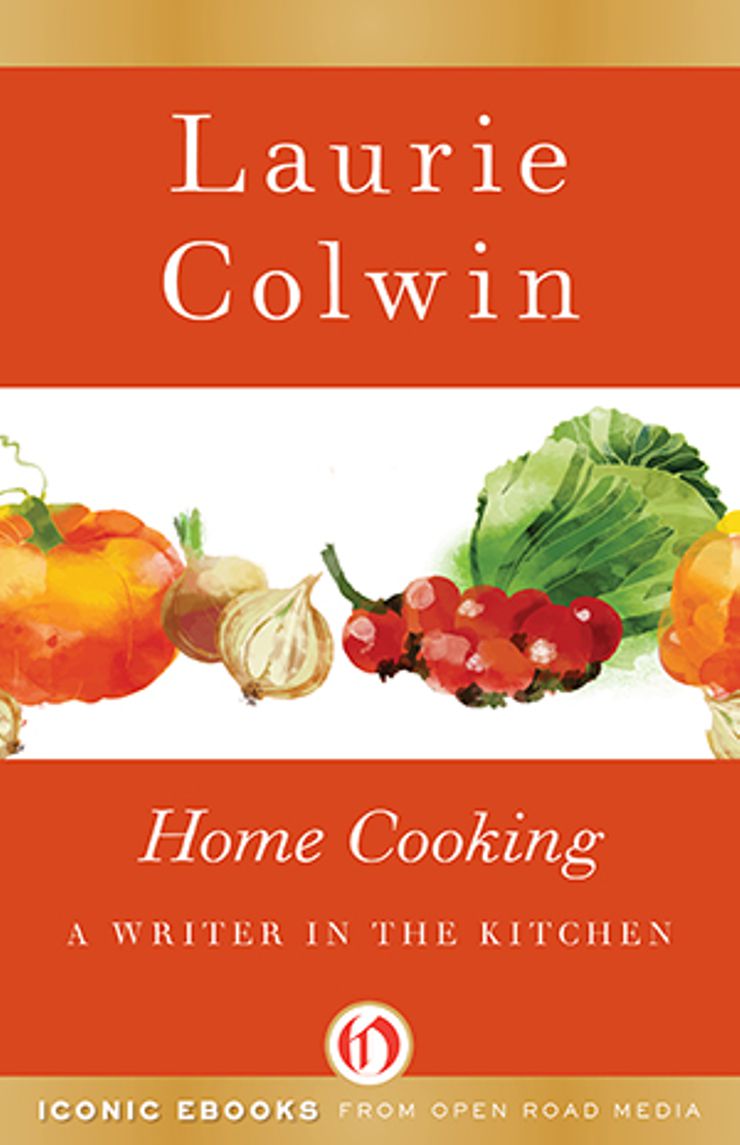 It took me a while to get the hang of two burners. Meanwhile, my mother gave me a toaster oven, thinking this would ensure me a proper breakfast. My breakfast, however, was bacon and egg on a buttered roll from an underground cafeteria at the Madison Avenue side of the Lexington Avenue stop of the E train. My toaster oven was put to far more interesting use.

I began with toasted cheese, that staple of starving people who live in garrets. Toasted cheese is still one of my favorite foods and I brought home all sorts of cheese to toast. Then, after six months of the same dinner, I turned to lamb chops. A number of fat fires transpired, none serious enough to call the fire department. I then noticed after a while that my toaster oven was beginning to emit a funny burnt rubber smell when I plugged it in. This, I felt, was not a good sign and so I put it out on the street. With the departure of my toaster oven, I was thrown back, so to speak, on my two burners.

Two-burner cooking is somewhat limiting, although I was constantly reading or being read to about amazing stove-top feats: people who rigged up gizmos on the order of a potato baker and baked bread in it, or a thing that suspended live coals over a pot so the tops of things could be browned, but I was not brave enough to try these innovations.

Instead, I learned how to make soup. I ate countless pots of lentil, white bean and black bean soup. I tried neck bones and ham hocks and veal marrow bones and bacon rinds. I made thousands of omelets and pans of my mother’s special tomatoes and eggs. I made stewed chicken and vegetable stew. I made bowls of pickled cabbage—green cabbage, dark sesame oil, salt, ginger and lemon juice. If people came over in the afternoon, I made cucumber sandwiches with anchovy butter.

I would invite a friend or friends for Saturday night. Three people could fit comfortably in my house, but not four, although one famous evening I actually had a tiny dance party in my flat, much to the inconvenience of my downstairs neighbor, a fierce old Belgian who spent the afternoon in the courtyard garden entertaining his lady friends. At night he generally pounded on his ceiling with a broom handle to get me to turn my music down. My upstairs neighbor, on the other hand, was a Muncie, Indiana, Socialist with a limp. I was often madly in love with him, and sometimes he with me, but in between he returned my affections by stomping around his apartment on his gimpy leg—the result of a motorcycle accident—and playing the saxophone out the window.

On Saturday mornings I would walk to the Flavor Cup or Porto Rico Importing coffee store to get my coffee. Often it was freshly roasted and the beans were still warm. Coffee was my nectar and my ambrosia: I was very careful about it. I decanted my beans into glass and kept them in the fridge, and I ground them in little batches in my grinder.

I wandered down Bleecker Street, where there were still a couple of pushcarts left, to buy vegetables and salad greens. I went to the butcher, then bought the newspaper and a couple of magazines. Finally I went home, made a cup of coffee and stretched out on my bed (which, when made and pillowed, doubled as a couch), and I spent the rest of the morning in total indolence before cooking all afternoon.

One Saturday I decided to impress a youth whose mother, a Frenchwoman, had taught him how to cook. A recipe for pot roast with dill presented itself to me and I was not old or wise enough to realize that dill is not something you really want with your pot roast. An older and wiser cook would also have known that a rump steak needs to be baked in the oven for a long time and does not fare well on top of the stove. The result was a tough, gray wedge with the texture of a dense sponge. To pay me back and show off, this person invited me to his gloomy apartment where we ate jellied veal and a strange pallid ring that quivered and glowed with a faintly purplish light. This, he told me, was a cold almond shape.

The greatest meal cooked on those two burners came after a night of monumental sickness. I had gone to a party and disgraced myself. The next morning I woke feeling worse than I had ever felt in my life. After two large glasses of seltzer and lime juice, two aspirins and a morning-long nap, I began to feel better. I spent the afternoon dozing and reading Elizabeth David’s Italian Food. By early evening I was out of my mind with hunger but feeling too weak to do anything about it. Suddenly, the doorbell rang and there was my friend from work. She brought with her four veal scallops, a little bottle of French olive oil, a bunch of arugula, two pears and a Boursault cheese, and a loaf of bread from Zito’s bakery on Bleecker Street. I would have wept tears of gratitude but I was too hungry.

We got out the card table and set it, and washed the arugula in the bathtub. Then we sautéed the veal with a little lemon, mixed the salad dressing and sat down to one of the most delicious meals I have ever had.

Then, having regained my faculties, I felt I ought to invite the couple at whose house I had behaved so badly. They were English. The husband had been my boss. Now they were going back to England and this was my chance to say good-bye.

At the time I had three party dishes: Chicken with sesame seeds and broccoli. Chicken in an orange-flavored cream sauce. Chicken with paprika and brussels sprouts. But the wife, who was not my greatest fan, could not abide chicken and suggested, through her husband, that she would like pasta. Spaghetti alla Carbonara was intimated and I picked right up on it.

Spaghetti is a snap to cook, but it is a lot snappier if you have a kitchen. I of course did not. It is very simple to drain the spaghetti into a colander in your kitchen sink, dump it into a hot dish and sauce it at once. Since I had no kitchen sink, I had to put the colander in my bathtub; my bathroom sink was too small to accommodate it. At this time my bathroom was quite a drafty place, since a few weeks before a part of the ceiling over the bath had fallen into the tub, and now as I took my showers, I could gaze at exposed beams. Therefore the spaghetti, by the time the sauce hit it, had become somewhat gluey. The combination of clammy pasta and cream sauce was not a success. The look on the wife’s face said clearly: “You mean you dragged me all the way downtown to sit in an apartment the size of a place mat for this?”

When I was alone, I lived on eggplant, the stove top cook’s strongest ally. I fried it and stewed it, and ate it crisp and sludgy, hot and cold. It was cheap and filling and was delicious in all manner of strange combinations. If any was left over I ate it cold the next day on bread.

Dinner alone is one of life’s pleasures. Certainly cooking for oneself reveals man at his weirdest. People lie when you ask them what they eat when they are alone. A salad, they tell you. But when you persist, they confess to peanut butter and bacon sandwiches deep fried and eaten with hot sauce, or spaghetti with butter and grape jam.

I looked forward to nights alone. I would stop to buy my eggplant and some red peppers. At home I would fling off my coat, switch on the burner under my teakettle, slice up the eggplant, and make myself a cup of coffee. I could do all this without moving a step. When the eggplant was getting crisp, I turned down the fire and added garlic, tamari sauce, lemon juice and some shredded red peppers. While this stewed, I drank my coffee and watched the local news. Then I uncovered the eggplant, cooked it down and ate it at my desk out of an old Meissen dish, with my feet up on my wicker footrest as I watched the national news.

Since many of my friends did not want to share these strange dishes with me, I figured out a dish for company. Fried eggplant rounds made into a kind of sandwich of pot cheese, chopped scallions, fermented black beans and muenster cheese. This, with a salad and a loaf of bread, made a meal. Dessert was always brought in. Afterwards I collected all the pots and pans and silverware and threw everything into my pan of soapy water in the bathtub and that was my dinner party.

Now I have a kitchen with a four-burner stove, and a real fridge. I have a pantry and a kitchen sink and a dining room table. But when my husband is at a business meeting and my little daughter is asleep, I often find myself alone in the kitchen with an eggplant, a clove of garlic and my old pot without the handle about to make a weird dish of eggplant to eat out of the Meissen soup plate at my desk.