Love means never having to say you're sorry for exhuming your dead wife's corpse.

Some people will go a long way for love—even to the grave. Literally. Whether it’s courting your future wife atop her mother’s tomb, driving your wife, mistress, half-sister (or all three!) to suicide, or exhuming the corpse of your muse and lover to retrieve your poetry manuscript, these macabre literary love stories are here to remind you that sometimes being in a relationship (especially an artistic one) isn’t all it’s cracked up to be. Whatever your relationship status, remember: it could be worse. 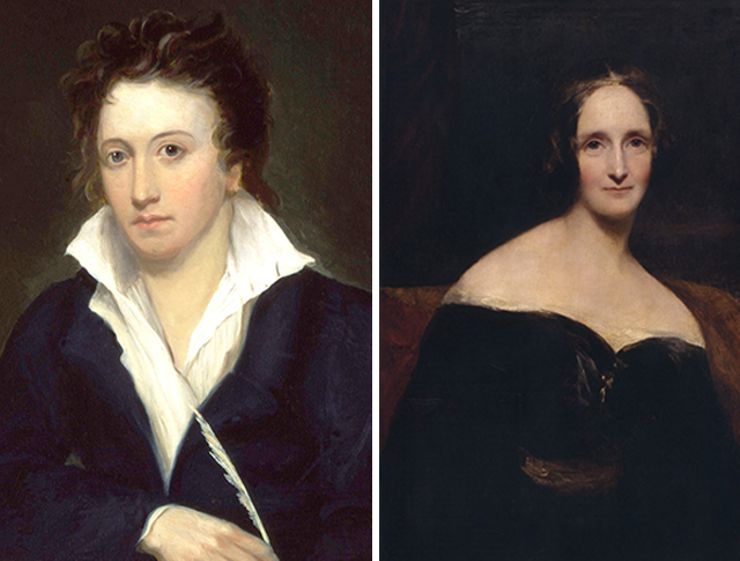 We will never definitively know if poet Percy Shelley and Frankenstein author Mary Shelley (née Godwin) had sex on the grave of Mary’s mother, famed feminist writer, Mary Wollstonecraft, but I like to think that it was true. What we do know is that Mary and Percy met when she was 16 and he was 21 (and already married) and that they often met at the site of Mary Wollstonecraft’s grave in the whirlwind few months of their courtship, which culminated in their eloping to Europe.

Soon after Shelley’s wife, Harriet, committed suicide by drowning herself, Mary and Percy legally married. But their few years of marriage were tempestuous, marked by the loss of more than one child and frequent moves, as well as Percy’s ill health and infidelity. In 1822, almost eight years after they eloped, Percy Shelley died by (accidental) drowning, his boat having been caught in an unexpected storm. Despite Percy’s less-than-ideal husbanding, Mary was committed to earning him the critical attention he had lacked during his lifetime: she edited and published valuable editions of his works. But even brilliant women can have bad taste in men. For my part, I still think he’s one of the preeminent assholes of the Romantic period. 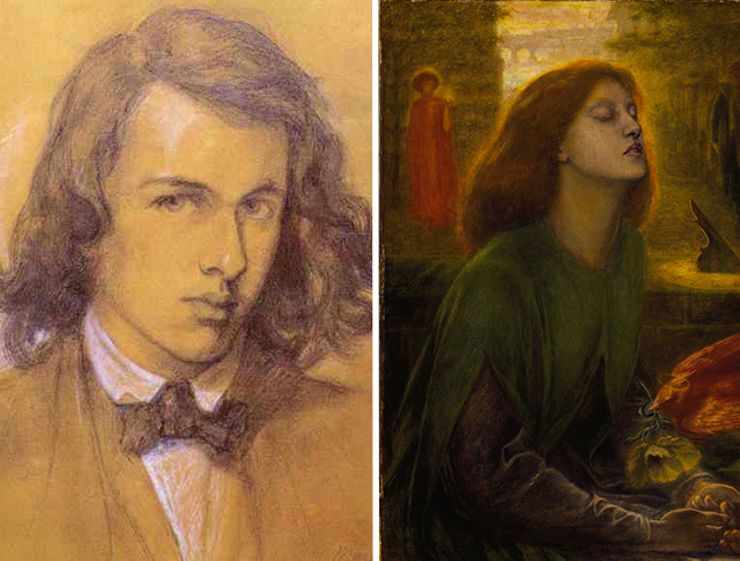 While Rossetti is probably best known today for the art he produced as a member of the Pre-Raphaelite Brotherhood, my favorite story about him involves his beleaguered muse, lover, and (briefly) wife, Elizabeth Siddal. Siddal’s strange beauty captivated more than one pre-Raphaelite artist, until Rossetti laid claim to her. She seems to have reciprocated his affections, despite his reluctance to marry her, and his infidelities. Sign me up! After almost a decade together, Rossetti finally decided to marry Siddal, perhaps because she seemed to be suffering from consumption. It’s unclear how much happiness this official union brought her: she gave birth to a stillborn child and committed suicide by taking an overdose of laudanum less than two years after they had married.

Given to impulsive acts, Rossetti buried the only existing manuscript copy of his unpublished poems with his wife. He soon became haunted by her memory, attended séances to try to communicate with her, and took to drinking. Roughly seven years after Siddal’s burial, he decided he had to publish his poems. His agent, the sketchy Charles Howell, had been urging him to exhume the manuscript (and body!) for a while. Although Rossetti couldn’t bring himself to be there, Howell seems to have been happy to undertake the task. According to Howell—a noted liar—Siddal’s body was in perfect condition, and her red hair had only grown more lustrous and abundant in death. The manuscript was disinfected (I’m not entirely sure what that entailed), and Rossetti was reunited with his poetry, although he lamented that one of his most important poems—“Jenny”—had a “great worm-hole right through every page.” The collection of his poems, published in 1870, scandalized the more conservative quarters of Victorian society. Shortly after a particularly negative review by Robert Buchanan, who coined the term “fleshly school” to describe the overly sexual poetry of Rossetti and others, Rossetti suffered a breakdown from which seems to have never fully recovered. 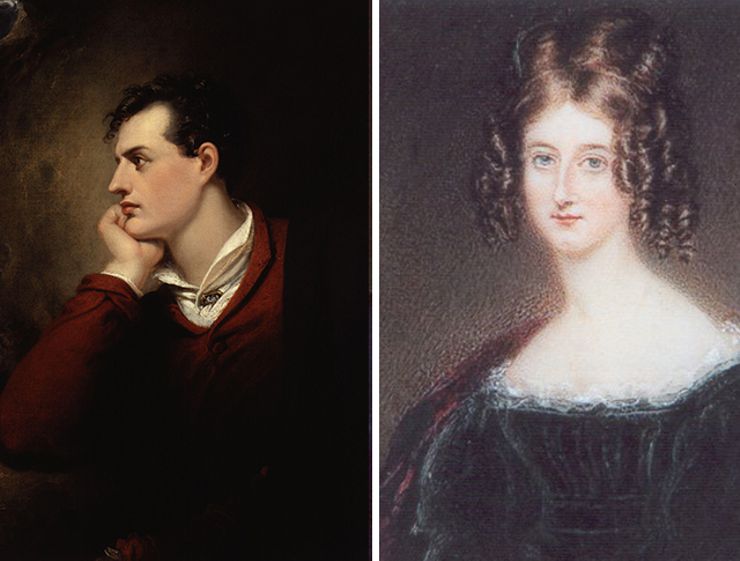 Although poet Lord Byron was another preeminent asshole of the Romantic period, he seems to have been a more fun, and sympathetic, one. Born with a foot that was in some way impaired (the debate continues over a. the medical cause of his foot impairment and b. which foot it actually was) and an inclination to corpulence, Byron fought to overcome the stigma of his limp and of being a chubby child. So he became the Romantic-era version of an extreme athlete and developed an eating disorder. Apparently being aggressively bullied at Harrow will do that to you.

Raised as an only child, Byron actually had a half-sibling, Augusta, who was five years his senior. They shared a father, the profligate Captain Byron, who seems to have worked hard to earn his nickname, “Mad Jack,” and to run through his succeeding wives’ fortunes as quickly as possible. Although Byron and Augusta did not see much of each other after her marriage in 1807, the two reconnected in 1813 (at the same time Byron was courting Annabella Millbanke, the unfortunate woman who would become his wife). Augusta was apparently one of the few people who could deal with—and calm—the temperamental Byron. She seemed to have a knack for making him laugh, and for not taking him seriously.

According to esteemed Byron scholar Leslie Marchand, “the extant evidence that Byron had sexual relations with Augusta does not amount to legal proof,” but “certain aspects of his life and correspondence cannot be explained sensibly in any other terms.” Circumstantial evidence also points to Byron being the father of Augusta’s daughter, Elizabeth Medora. While Byron’s marriage to Annabella collapsed in little over a year, leading to his permanent exile from England in 1816 (he likely did not flee because of allegations of incest, but because his wife threatened to accuse him of sodomy, then a hang-able offense), he corresponded with Augusta for the rest of his (relatively short) life. A few years after Byron died, Elizabeth Medora ran off with her older sister’s husband, which to my mind proves she was indeed her uncle’s daughter.

In 1871, Verlaine was in his late 20s and already a well-known poet when the young (barely 17 year-old) Rimbaud reached out to him as an artistic mentor. Verlaine encouraged Rimbaud to travel to Paris, where the two soon began a torrid affair. Rimbaud seems to have quickly alienated most people he met—he eschewed bathing, delighted in his lice infection, had a tendency to trash the places he stayed in, and enjoyed nude sunbathing—but delighted Verlaine, who also considered Rimbaud a muse. The two poets seem to have brought out the worst in each other as they conducted their tempestuous affair in a haze of absinthe, hashish, fierce love-making, and brawling.

While the violence-prone Verlaine made intermittent attempts to clean up his act, Rimbaud apparently “saw himself as an archangel descended to earth to liberate Verlaine from his bourgeois temptations as a human being and the tendencies towards prettiness in his poetry,” according to Edmund White. After a quarrel in Brussells, Verlaine—whose mental instability and abusive tendencies were exacerbated, and perhaps caused by, his absinthe addiction—famously shot twice at Rimbaud, grazing him in the hand. Although Rimbaud didn’t press charges, Verlaine ended up serving 18 months in prison. There, unable to access absinthe, he produced a poetry collection and converted to Catholicism. He sought out Rimbaud after his release. The two meet in a forest, quarreled one last time, and Verlaine was apparently found there unconscious the following day. The general consensus is that the two never saw each other again.

All photos courtesy of Wikipedia.