Scott Jeffrey Miller hopes to teach you how to lead effectively with Management Mess to Leadership Success.

Have you ever wondered if you’re coming across as a good leader in the workplace? Do you want to cultivate your leadership skills to ensure you’re being as effective as possible? Scott Jeffrey Miller, a student of The 7 Habits of Highly Effective People author Stephen R. Covey, has some advice for you. In his first ever published book, Management Mess to Leadership Success: 30 Challenges to Become the Leader You Would Follow, he highlights 30 clear cut and distinctive ways you can produce the optimum results to become the leader you would choose to follow. Unlike many other books in a similar vein, Miller highlights his own failures as a leader in hopes that you’ll learn from his mistakes.

Within the book’s pages, Miller reveals 30 challenges that you can take on in order to become a better leader—something you can apply to all aspects of life, not just business. You may find that some of these challenges are already successes for you. And then you may find that some of these challenges highlight your current messes—and you may not have even been aware. Miller shares authentic and genuine personal anecdotes of his successes and failures with each challenge, in addition to providing application suggestions that help you address the goals you set for yourself.

In the excerpt below, Miller kicks off his section titled “Lead Yourself” with the first challenge: Demonstrate Humility. He recounts a time in which his new employees showed up late for a meeting and he responded in a way he would not recommend for effective leaders. Even though he thought his strong-arm tactics were appropriate at the time, he later realized that’s not a way to garner the respect of your employees.

Read on for an excerpt of Management Mess to Leadership Success, and then pre-order the book, which will be published on June 18, 2019. 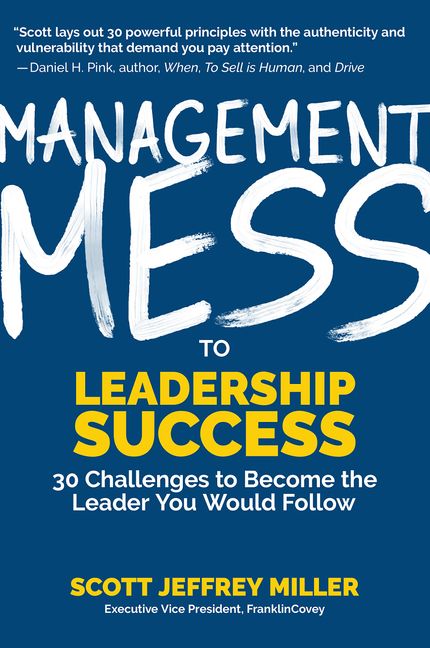 Has your lack of humility ever limited your perspective or lessened your influence as a leader? Would you even know if it had?

It was an important two days in my early leadership career. After a successful four years as an independent salesperson, I had been recently promoted to lead a group of about ten peers. Most of them had preceded me on the team, invested in and developed their own sales skills, and in some ways were more talented than I was as a consultative sales representative.

I’d shown some leadership promise as the new leader and wanted to start it off memorably. (Stay tuned for that part, I promise not to disappoint in this opening challenge.) After securing the vice president’s approval and funding, I planned a two-day sales-strategy meeting. I organized the conference room, secured the catering, and hired one of our internal performance consultants to facilitate a two-day training to ensure this team was up to date on our latest leadership solution.

The first morning arrived, and the consultant, Nancy Moore, and I both showed up around 7 a.m. for the 8 o’clock announced start. I remember it well. I was excited and likely amped after one too many cups of coffee. (In fact, one was too many in Provo, Utah.) Nancy was also very invested in the trainees’ success and even brought a platter of beautifully arranged and freshly cut fruit for them (something she assembled herself, not one of those displays you buy ready-made from the grocery store). I was ready for my leadership debut. This was going to be epic. Team members began to stroll in around 8:15. We finally started around 8:30 when the last associate showed up.

I was incensed. I managed to open the meeting, introduced the consultant, and took my place at the U-shaped table. But I was consumed by the fact that on my first day as their leader, my team would disrespect both the consultant and me by being so cavalier with the start time. After all, we’re experts at time management; how could they all show up late and not even apologize? It stewed in me, and like most issues that irritate me, it metastasized and took on a life of its own.

I went through the day fixated on the profound disrespect. The team knew I was annoyed because I made zero attempt to conceal it. The concept of self-regulation and managing my emotions was not even in my lexicon at the time.

It continued to agitate me into the evening and the next morning. On the way to the office, I stopped at the grocery store, not to buy fruit or croissants, but to buy ten copies of the Salt Lake Tribune. I had a plan, and it was going to be legendary. Leadership in action, people.

I entered the room at exactly 8:00 a.m., our starting time. To my sadistic delight, few were in their seats. Ten or so minutes passed before everyone was finally seated. I stood up, in what I thought would be one of my finest leadership moments, and began to walk around the table. I pulled the classified ads out and tossed them in front of each person, announcing, “If you want a job from nine to five, Dillard’s is hiring.” And in case they didn’t get the point, I passed out yellow markers so they could highlight any openings.

This was what being a successful leader was all about! I was making an important point and would be respected for my candor, boldness, and strength.

At least, it seemed like a great idea at the time.

Rather than acknowledging my leadership genius, people began getting up from their tables and leaving. Many shot me looks that ranged from confusion to sheer repugnance. Still others began telling me off, more than one threatening to quit on the spot. I did what any good leader would do under such circumstances: I doubled down. This was on them after all, not me.

Maybe not the best strategy. Nancy stood frozen, watching in disbelief. One colleague announced it was his last day. There was a general theme to the arguments against me: How could the team leader, the same one sponsoring a leadership-training session, so blatantly disregard the leadership principles being taught?

Calling that moment a leadership mess is probably kind. Because this was nearly twenty years ago, how we all managed to take a collective breath and salvage the moment is a bit fuzzy. I am sure it had more to do with them than me, but we somehow reassembled about an hour later and finished the day.

If you think I had a leadership mea culpa that morning, you’d be wrong. For days I privately insisted to Nancy that I was in the right. To her credit, she patiently listened to my absurd rationalization. A week or so later, she finally sat me down and helped me understand why my technique had not served me well. It was hard for me to see her point, but I trusted her to have my best interests in mind, and so took the lesson to heart. I did my best to make it up to the team and apologize for my actions.

You might be surprised to learn I’m friends with every person who was in the training room that day. Many of them came to my wedding a decade later, and we laughed and cried at the absurdity of it all. In fact, several of them re-created the scene at my reception in front of my new wife of only 120 minutes. I’m sure she must have been worried that she’d just committed to a sociopath. In the end, we all marveled at my profound ignorance and arrogance.

Or said another way, my total lack of humility.

Let’s just say I wasn’t born with the humility gene. I struggled with it as a first-time manager, and I struggle with it now. I have to really work at remembering its value in my relationships, especially as a leader.

Want more nonfiction books? Sign up for the Early Bird Books newsletter and get the best daily ebook deals delivered straight to your inbox.

In my role as executive vice president for thought leadership at FranklinCovey, I am privileged to host several interview programs, both on the Internet and iHeartRadio. After interviewing more than a hundred bestselling authors, CEOs, and leadership experts, the one commonality they all share when defining a great leader is humility. They see humility as a strength, not a weakness. You might argue that the opposite of humility is arrogance.

Leaders who fail to demonstrate humility often find themselves leaning toward arrogance and seeking outside validation. They rarely listen to anyone but themselves, and thus miss opportunities to learn and coursecorrect. They often turn conversations into a competition and feel the need to “one-up” others and have the final say.

“Those who are humble have a secure sense of self—their validation doesn’t come from something external, but is based on their true nature. To be humble means to shed one’s ego, because the authentic self is much greater than looking good, needing to have all the answers, or being recognized by one’s peers. As a result, those who have cultivated humility as an attribute have far greater energy to devote to others. They go from being consumed with themselves (an inner focus) to looking for ways to contribute and help others (an outer focus). Humility is the key to building solid character and strong, meaningful connections.”

When you learn to embrace humility, you feel more comfortable because you know who you are. You can let go of the fear of making mistakes or the need to never show weakness. To quote our cofounder Dr. Stephen R. Covey, “Humble leaders are more concerned with what is right than being right.”

FROM MESS TO SUCCESS:

Want to keep reading? Pre-order Management Mess to Leadership Success now. The book will be published on June 18, 2019.

Want more nonfiction books? Sign up for the Early Bird Books newsletter and get the best daily ebook deals delivered straight to your inbox.

This post is sponsored by Mango Publishing. Thank you for supporting our partners, who make it possible for Early Bird Books to continue publishing the book stories you love.