We're giving away 5 copies of the unforgettable historical fiction novel.

According to Alice Munro, who received the Nobel Prize in Literature in 2013, “Carol Windley’s writing has a unique power, a perfect combination of delicacy, intensity, and fearless imagination.” And we think Windley's writing is at its full potential in her most recent novel, Midnight Train to Prague. A historical fiction novel that spans two world wars, it's a timeless tale of friendship, romance, betrayal, and survival—fans of Kristin Hannah's The Nightingale and Anthony Doerr's All the Light We Cannot See are sure to fall in love with this story, too.

We enjoyed this book so much that we're giving away five copies of Midnight Train to Prague. Enter below for your chance to win!

Note: This giveaway is now closed.

Enter your email address below for your chance to win a copy of Midnight Train to Prague!

The acclaimed author of Home Schooling returns with a timeless tale of friendship, romance, betrayal, and survival that spans two world wars.

In 1927, as Natalia Faber travels from Berlin to Prague with her mother, their train is delayed in Saxon Switzerland. In the brief time the train is idle, Natalia learns the truth about her father—who she believed died during her infancy—and meets a remarkable woman named Dr. Magdalena Schaeffer, whose family will become a significant part of her future. Shaken by these events, Natalia arrives at a spa on the shore of Lake Hevíz in Hungary. Here, she meets Count Miklós Andorján, a journalist and adventurer. The following year, they will marry.

Years later, Germany has invaded Russia. When Miklós fails to return from the eastern front, Natalia goes to Prague to wait for him. With a pack of tarot cards, she sets up shop as a fortune teller, and she meets Anna Schaeffer, the daughter of the woman she met decades earlier on that stalled train. The Nazis accuse Natalia of spying, and she is sent to a concentration camp. Though they are separated, her friendship with Anna grows as they fight to survive and to be reunited with their families.

“An original and compelling story, told with vivid detail and a richness in setting that I absorbed in one sitting.”—Ellen Keith, bestselling author of The Dutch Wife 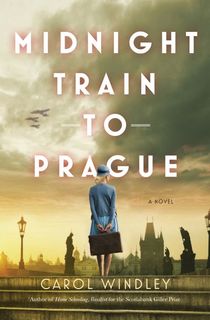 Note: The sweepstakes is open to all legal residents of the 50 United States and Washington, DC who are 18 years of age and older by October 14, 2020.