“Monster” by Robin Morgan: The Anthem of the Women’s Movement

In 1972, this electrifying poem inspired women everywhere to take a stand in the fight for equality.

The #askhermore and HeForShe campaigns are going strong, and feminists around the world are calling for equality everywhere. But this fight has been going on for decades – and each generation has their own voice, as well as their own anthem.

In 1972, Robin Morgan’s poem “Monster” was that call to action for the women’s movement.

As Morgan herself explained it, “‘Monster’ was becoming a rallying cry for women, who made it their own: phrases, lines, stanzas, entire sections appeared on banners, posters, protest signs, buttons, T-shirts, bumper stickers, and note cards … I was stunned and grateful that the poem had apparently unlocked and expressed the grief and rage suffocating so many women. Some called it ‘the anthem of feminism,’ and others termed it ‘the pledge of allegiance’ to the Women’s Movement.”

Morgan has strived before and since to provide outlets for women throughout the world. Her Sisterhood Is Global Institute and National Museum of Women in the Arts continue to advocate for women everywhere.

Reread the poem that inspired so many women to take a stand – and let it inspire you today.

Listen. I’m really slowing dying
inside myself tonight.
And I’m not about to run down the list
of rapes and burnings and beatings and smiles
and sulks and rages and all the other crap
you’ve laid on women throughout your history
(we had no part in it—although god knows we tried)
together with your thick, demanding bodies laid on ours,
while your proud sweat, like liquid arrogance,
suffocated our very pores—
not tonight.

I’m tired of listing your triumph, our oppression,
especially tonight, while two men whom I like—
one of whom I live with, father of my child, and
claim to be in life-giving, death-serious struggle with—
while you two sit at the kitchen table dancing
an ornate ritual of what you think passes for struggle
which fools nobody. Your shared oppression, grief,
and love as effeminists in a burning patriarchal world
still cannot cut through power plays of maleness.

The baby is asleep a room away. White. Male. American.
Potentially the most powerful, deadly creature
of the species.
His hair, oh pain, curls into fragrant tendrils damp
with the sweat of his summery sleep. Not yet, and on my life
if I can help it never will be “quite a man.”
But just two days ago on seeing me naked for what must be the
five-thousandth time in his not-yet two years, he suddenly
thought of the furry creature who yawns through
his favorite television program;
connected that image with my genitals; laughed,
and said, “Monster.”

I want a women’s revolution like a lover.
I lust for it, I want so much this freedom,
this end to struggle and fear and lies
we all exhale, that I could die just
with the passionate uttering of that desire.
Just once in this my only lifetime to dance
all alone and bare on a high cliff under cypress trees
with no fear of where I place my feet.
To even glimpse what I might have been and never never
will become, had I not had to “waste my life” fighting
for what my lack of freedom keeps me from glimpsing.
Those who abhor violence refuse to admit they are already
experiencing it, committing it.
Those who lie in the arms of the “individual solution,”
the “private odyssey,” the “personal growth,”
are the most conformist of all,
because to admit suffering is to begin
the creation of freedom.
Those who fear dying refuse to admit they are already dead.
Well, I am dying, suffocating from this hopelessness tonight,
from this dead weight of struggling with
even those few men I love and care less about
each day they kill me.

Do you understand? Dying. Going crazy.
Really. No poetic metaphor.
Hallucinating thin rainbow-colored nets
like cobwebs all over my skin
and dreaming more and more when I can sleep
of being killed or killing.
Sweet revolution, how I wish the female tears
rolling silently down my face this second were each a bullet,
each word I write, each character on my typewriter bullets
to kill whatever it is in men that built this empire,
colonized my very body,
then named the colony Monster. 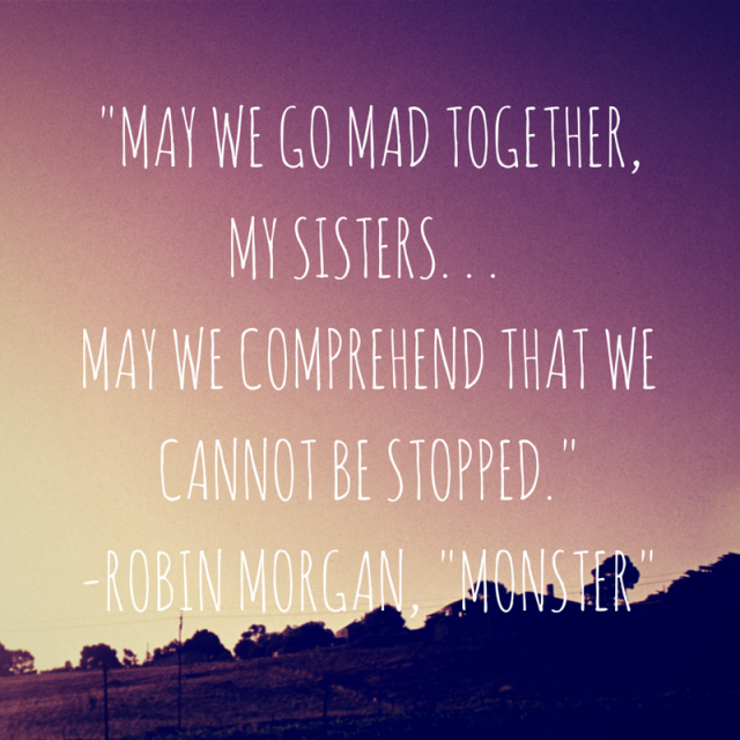 I am one of the “man-haters,” some have said.
I don’t have time or patience here to say again why and how
I hate not men but what it is men do in this culture, or
how the system of sexism, power dominance, and competition
is the enemy—not people, but how men, still, created that system
and preserve it and reap concrete benefits from it.
Words and rhetoric that merely
gush from my arteries when grazed
by the razoredge of humanistic love. Enough.
I will say, however, that you, men, will have to be freed,
as well, though we women may have to kick and kill you
into freedom
since most of you will embrace death quite gladly
rather than give up your power to hold power.

Compassion for the suicidal impulse in our killers? Well,
on a plane ride once, the man across the aisle,
who was a World War Two paraplegic,
dead totally from the waist down,
wheeled in and out of the cabin, spent the whole trip avidly
devouring first newspaper sports pages
and then sports magazines,
loudly pointing out to anyone who would listen
(mostly the stewardesses) which athlete was a “real man.”
Two men in the seats directly behind me talked the whole time
about which Caribbean islands were the best for whoring, and
which color of ass was hotter and more pliant.
The stewardess smiled and served them coffee.
I gripped the arms of my seat more than once
to stop my getting up and screaming to the entire planeload
of human beings what was torturing us all—stopped
because I knew they’d take me for a crazy, an incipient
hijacker perhaps, and wrestle me down until Bellevue Hospital
could receive me at our landing in New York.
(No hijacker, I understood then, ever really wants to take
the plane. She/he wants to take the passengers’ minds, to turn
them inside out, to create the revolution
35,000 feet above sea level
and return to the takeoff country with a magical flying cadre
and, oh yes, to win.)
Stopping myself is becoming a tactical luxury,
going fast.

My hives rise more frequently, stigmata of my passion.
Someday you’ll take away my baby, one way or the other.
And the man I’ve loved, one way or the other.
Why should that nauseate me with terror?
You’ve already taken me away from myself
with my only road back to go forward
into more madness, monsters, cobwebs, nausea,
in order to free you—men—from killing us, killing us.

No colonized people so isolated one from the other
for so long as women.
None cramped with compassion for the oppressor
who breathes on the next pillow each night.
No people so old who, having, we now discover, invented
agriculture, weaving, pottery, language, cooking
with fire, and healing medicine, must now invent a revolution
so total as to destroy maleness, femaleness, death.

Oh mother, I am tired and sick.
One sister, new to this pain called feminist consciousness
for want of a scream to name it, asked me last week
“But how do you stop from going crazy?”
No way, my sister.
No way.
This is pore war, I thought once, on acid.

And you, men. Lovers, brothers, fathers, sons.
I have loved you and love you still, if for no other reason
than that you came wailing from the monster
while the monster hunched in pain to give you the power
to break her spell.
Well, we must break it ourselves, at last.
And I will speak less and less and less to you
and more and more in crazy gibberish you cannot understand:
witches’ incantations, poetry, old women’s mutterings,
schizophrenic code, accents, keening, firebombs,
poison, knives, bullets, and whatever else will invent
this freedom.

May my hives bloom bravely until my flesh is aflame
and burns through the cobwebs.
May we go mad together, my sisters.
May our labor agony in bringing forth this revolution
be the death of all pain.

May we comprehend that we cannot be stopped.

May I learn how to survive until my part is finished.
May I realize that I
am a
monster. I am
a
monster.

I am a monster.

And I am proud.