The Re-Read: Are You There God? It’s Me, Margaret

Revisiting this Judy Blume classic was kind of a religious experience.

I remember my paperback: Orange cover art; dog-eared corners; rippled pages—thanks to a Coca-Cola spillage habit. I remember intermittently pausing during passages to ask my dad what certain words meant. Words that had not yet, nor would they ever, appear on my grade-school vocabulary tests. Those conversations went something like this—Me: “Daddy, what’s a nudist colony?”; Him: “Just what are you reading?”. I remember feeling that at times I was indulging in something that might get me grounded. Mentions of Playboycenterfolds with big boobs in a novel for sixth graders? Got to love the Blume.

But most of all I, a girl from the South, remember connecting with Margaret, a girl from the Northeast, over banter about a stage in life we all have to trudge through no matter where we’re from: adolescence. And even though this time around, more than 20 years later, as the thoughtful discourse of one of today’s most incomparable writers for young adults poured out of an app on my iPhone, I still got the same feeling: I’m not alone.

Judy Blume, a novelist who cemented her popularity with young adults in 1970 with the publication of Are You There God? It’s Me, Margaret, operates on what today’s youth would call “zero f*cks” (they’re a faster-moving bunch). She has no filter, but not in a way that is off-putting. Blume writes about the things that preadolescents actually think about, the things that perhaps most parents would prefer remain a mystery–like what is a sanitary belt? When Mom doesn’t have an answer, Blume does.

And in this case, explanation comes in the form of an 11-year-old who likes tuna fish and things that are pink. Margaret Ann Simon is the daughter of a Christian mother and a Jewish father, though choosing which Good Book she will follow is entirely up to her. It’s a hefty choice she perpetually discusses with a version of God who’s all her own. He is a version of Dear Diary that doesn’t require a lock. Only the introductory greeting of “Are you there, God?”

Now, of course Margaret, teetering on the cusp of pubescence, has stressors that are not of the sectarian variety. She is flat-chested, socially awkward, and desperate to reach one of the most pivotal moments in a young woman’s life: the menarche, or as I like to call it, the uninvited. Not to mention she, like every other preteen, is anxious to dip her toe into the dating pool. All of which–boobs, her period, BOYS!–she pines over with God.

While those hot-topic issues are at once sensational, necessary, and the very things I found riveting about the book my first go-round (which was about age 12 or so), this time I found Margaret’s chitchat with God regarding her wavering feelings about religion–and even her momentary resolve to not believe in anything (and then to discuss that with God, ha)–to be the most profound.

Blume’s book devotes itself to a yearlong odyssey during Margaret’s coming-of-age, beginning with her move to New Jersey from Manhattan’s Upper West Side, and ending with her graduating the sixth grade. And through it all–the bra shopping, the maxi pad practicing, and the surge of misunderstood emotions–a war wages within her hinging on which religion she should choose to follow. She looks for God everywhere: “Why did you let me do that? I’ve been looking for you God. I looked in temple. I looked in church. And today, I looked for you when I wanted to confess. But you weren’t there.” I’ve felt this way.

I haven’t exactly walked into a temple and counted those wearing hats, or confessed a sin to a man in a box, but I have looked for some kind of divine guidance. Like Margaret, I wasn’t raised in a church. My father is Catholic, my mother is some Protestant variety, but Sunday mornings for me consisted of sleeping late or catching up with Clarissa as she explained it all.

Don’t get me wrong, it’s not like I was doodling satanic hexagrams on my textbooks or anything. I, too, talked, and still do talk, to God–a god at least. In my youth, I would recite the Hail Mary prayer my dad taught me every night before shut-eye; but hell if I knew what “fruit of thy womb” meant. And like Margaret, sometimes I wished someone had paved the way. Margaret’s Christian grandmother raises a vexing point when she proclaims, “A person doesn’t choose religion. A person’s born to it!”

But leave it to Blume’s comically philosophical protagonist to make an even better point with her final act ruling on the matter: She decides to not decide (clever girl). Further, she decides that if she one day has kids, she will tell them which religion they are so they can start learning at an early age. Because “12 is very late to learn.” Hmm, I just wonder if 30-plus is too late. Regardless, I’m positive that I, like Marg, will continue to find divine emotional satisfaction by talking to God, whomever he–or she–may be.

Are You There, God? It's Me Margaret 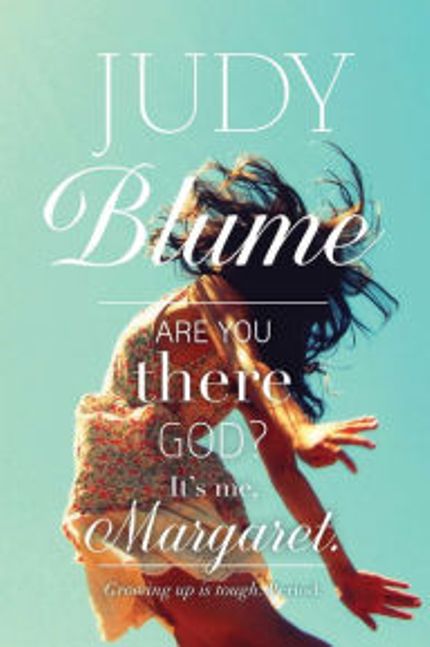 Looking for more of your childhood favorites? Sign up for the Early Bird Books newsletter and get the best daily ebook deals delivered straight to your inbox.