The Absurd Meets Reality in This Darkly Humorous Story Collection

The titular story in Julia Slavin's collection, "The Woman Who Cut Off Her Leg at the Maidstone Club," is a wacky satire of elitism.

When you read any story from Julia Slavin’s collection, The Woman Who Cut Off Her Leg at the Maidstone Club, you’re left with two prevailing questions: Did that just happen? And, how does she even come up with this stuff?

Maidstone Club is a showcase of Slavin’s vivid imagination, as she introduces fantastical absurdities to recognizable, domestic settings. “Swallowed Whole” sees a middle-aged woman who, overcome by lust, eats the boy who mows her lawn. Meanwhile, “Pudding” pokes fun at marital standoffs: When a husband and wife refuse to clean up a spot of spilled pudding, it remains on the floor for months. While both of these scenarios feature familiar touchstones—midlife crises and marriage, for instance—stretching them to their extremes allows readers to see them in a new light.

The excerpt below is taken from the titular story of Slavin's critically-acclaimed collection. Here, a woman is so plagued by mosquito bites—an affliction of the lower classes that her lover has now passed onto her—she tries to saw off her own leg. She'd rather have a physical handicap than bear the marks of the non-elite. Like the rest the collection, it's a darkly humorous satire that will appeal to fans of magical realism.

Read an excerpt from Julia Slavin's New York Times Notable Book, and then download The Woman Who Cut Off Her Leg at the Maidstone Club. 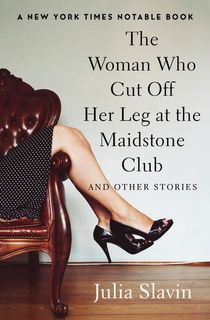 Word spread down East Beach that a woman had cut off her foot in front of the Maidstone Club.

None of the club members budged from their chaises or stepped out from under their candy-striped umbrellas. They assumed that the woman was a day visitor who’d ridden in on the back of a motorcycle or a renter who’d wandered over, burnt and bewildered, from West Beach. But then, to their astonishment, word spread that the woman was Maisie Haselkorn of the Eastport Haselkorns. With that dispatch, the entire East Beach population migrated toward Maidstone, nonchalantly, so as not to appear too impressed.

But the news was wrong. She hadn’t severed her foot. Not yet. Rather, using a penknife, she’d carved a broken line into the skin below the left ankle, like a doctor preparing for surgery, and tied an Hermès scarf around her calf as a tourniquet. The foot was buried under a mosaic of mosquito bites, which Maisie’d rubbed raw with sand and salt water, unable to stop the violent itching. A low wolverine growl came from Maisie’s throat as, teeth bared, nails worn to nubs, she gouged at one bite, her eyes already moving on to the next. Athletic and limber, Maisie raised her foot to her mouth and gnawed off the tops of the bites that lined her soft instep.

“Scratch off the top of ’em, then pour on a jigger of Rebel Yell,” a day visitor in puka-shell jewelry advised. “Burns like four-alarm chili, but those sons-a-bitches get what they deserve.”

“Leonine amusement,” Pasty Plugh scoffed to Skimpy Pimscott, struggling for a look over the crowd of day visitors and renters with their zinc-covered noses and coconut stench. “August in East has become unbearable.”

“Yes, but poor Maisie,” Skimpy whispered. Pasty stood on tiptoes, then elbowed her way through. When she saw the foot, covered in a mountain range of bloody red bites, she brought her hands to her mouth and gasped.

Club members did not get mosquito bites. The skin and blood of families like the Plughs, the Pimscotts, the Haselkorns, and the Trums didn’t appeal to the local insect life. Instead they fed on the imported flesh of renters like the Newmans, the Nathans, the Fussellis, and the Golds. Or the leather of day visitors like—does it matter? But Maisie Haselkorn, daughter of Electra von Hardweger Haselkorn and the late F. Whitmire “Fuzzy” Haselkorn, was so infused with the bodily fluids of Ben Loeb, the West Beach land developer, that her genetic resistance to bugs had been dulled. And now they swarmed around her, hovered overhead, legions of mosquitoes probing her with their bloodsucking proboscises.

“I knew it would lead to a bad end,” Skimpy told Mim Trum.

“Isn’t there something I can do?” Pasty Plugh asked Maisie, swatting the insects away with her hand.

“Oh, no, Pasty,” Maisie said, scratching and gnawing and slapping. “It’s just that the itching is so … annoying.”

Scraping her foot with the sharp edge of a broken clamshell and oblivious of the crowd, Maisie looked out over the Sound toward Haselkorn Island, a place she’d never been, where, all morning, ferries had delivered land-moving equipment to break ground for the new condominiums, hotels, and restaurants. From here it was only a dollop of green in an aluminum sea.

Ben Loeb slapped a mosquito on his arm and followed Maisie Haselkorn out of Mim Trum’s dinner honoring Lizzy Mann, who’d sung a benefit for children with AIDS at East Town Hall. She’d been just out of his grasp at all the parties that season, but tonight she’d asked him to hold her drink while she showed Chrispo Pimscott how to use the indoor rubberized rock climber. Ben had to jog to keep up with Maisie’s stride.

“I don’t like entertainment at parties.” Maisie swung her arms with clenched fists. “And I have no interest in hearing Lizzie Mann sing.”

Ben looked at this graceful woman in the cool moonlight. She was tallish and thin with the skin and nose of good breeding. Hers were the choice chromosomes, encoded with healthy hair, good nails, straight teeth, and athletic ability. She’d been star pentathlete at Grangerville. Her Grangerville yearbook, “The Golden Nut,” captured her personality and athletic prowess in a photograph mid-hurdle with a caption that read, “She throws, she jumps, that winning attitude—MAISIE!”

“I’m Ben Loeb. I met you at the Clayborns’ dinner for that artist.”

“Ramsey Angus Hunter. I didn’t like him or his guillotine imagery. And I know who you are, Mr. Loeb.”

“You built the new strip mall in North East.”

“We prefer ‘convenience center.’ The industry considers Loeb Commons to be architecturally significant.” He thought she’d be impressed.

“Why don’t we just stop all building altogether?” He was becoming aroused by this young woman, so fiercely certain of her opinions.

Ben was getting winded. “Why don’t you have a car like everyone else?”

“I’ll get it in the morning,” Ben said. Maisie looked at him, perplexed. Ben noticed one of her eyes was higher on her face than the other. “I’m spending the night with you.”

Want more short story collections? Sign up for the Early Bird Books newsletter and get the best daily ebook deals delivered straight to your inbox.

“Don’t think I don’t know what you’re after, Mr. Loeb.” Maisie leaned back luxuriously on a pale-chintz fainting couch.

Ben lifted his head from between her thighs. “Please, call me Ben.”

Haselkorn Island. Four square miles of undeveloped land. The island had been part of a royal grant over three hundred years ago. The sight of it made Ben drool like an infant. Word had it the heirless and ancient Lord Cotton Haselkorn of the Island Haselkorns was considering its disposition.

“Make me ambassador of goodwill.” Ben moved Maisie’s knees farther apart with his chin. “It’s time you kissed and made up.”

He was the hairiest man Maisie’d ever seen. When she first saw him undressed, that night after Mim Trum’s party, she childishly squeezed her eyes shut, wishing the hair would go away when she opened them. But now that she knew every inch of him, she loved every hair. She loved the way it was so long in places it curled, how when he walked out of the ocean it matted down slick like a seal, how when he was cold it stood out from his body like quills on a porcupine. The men she’d been accustomed to before Ben—Carlsbad Trum, Rennie Pimscott, Minty Serk, well-born men with smooth, hairless chests and backs—seemed childlike now, underdeveloped. Next to Ben, those hairless attractions seemed pedophilic.

Electra Haselkorn kept a sharp eye on her daughter and the West Beach developer who came as Maisie’s date to all the parties now, suspicious of the intentions of a newcomer. “All that hair, Maisie,” she said, watching Ben jackknife into the Esterhouses’ pool. “It suggests a questionable background.” But seeing the telltale insect bites on Maisie’s ankles, and the bottles of calamine, Bactine, Off!, and other foul-smelling potions Maisie kept hidden in her closets, Electra knew it was too late. The Ben Loeb virus would have to run its course. She knew from her own love affair thirty-two years earlier with Joey Ottominelli, the contractor Luciano Ottominelli’s son, that love, true love, enters the blood like barbiturate, and once you’ve had it you can’t do without. Watching Maisie bend to scratch a welt behind her knee, just as she herself had scratched thirty-two years before, Electra knew Ben Loeb was all through her daughter like an infection.

Want to keep reading? Download The Woman Who Cut Off Her Leg at the Maidstone Club now.

Want more short story collections? Sign up for the Early Bird Books newsletter and get the best daily ebook deals delivered straight to your inbox.