Most science fiction, future fantasy, or speculative fiction—the last may be the best description in this case—takes us into a utopia we want, or a dystopia we don’t, and then leaves us to contemplate how we got there.

Marge Piercy is every bit as imaginative as H. G. Wells or Isaac Asimov or any of the great fantasists, but she is also a fierce and devoted activist who wants us to be more than passive readers. It is the genius of her 1976 novel, Woman on the Edge of Time, that she posits two futures, each one the logical extension of events we are experiencing now. This makes us feel both powerful enough and angry enough to do something about steering toward the more humane future.

Since her caring comes with and from a feminist imagination, she doesn’t make the usual two errors of science fiction when it comes to gender: assuming humans are immutably male/female, masculine/feminine; or reversing those roles so that females dominate, as if somebody has to be the boss—a failure of the imagination.

One of her two main characters is a time-traveler from the future who is androgynous enough to be seen by the other main character—a Chicana in the present who has suffered abuse as a poor woman—as if she were a young man. In fact, she is a free woman.

Want more classic SF/F? Sign up for the Early Bird Books newsletter, and get the best daily ebook deals delivered straight to your inbox.

I don’t want to give away all the pleasure of discovering the two imaginative and opposed futures. Let’s just say that we definitely don’t want one, though we recognize it, and we do want the other, though it’s strange enough to be challenging. In the dystopia, people have become so class-divided, and the environment so poisoned, that only the very rich can live high enough in mammoth buildings to feel the sun or see the sky. The future we do want and where the time-traveler comes from is a series of small communes in nature. People can choose the cultural pleasures of the past, but those pleasures are no longer dictated by race or class or sex or any category of birth. Indeed, the future is not without struggle. It is only a utopia by comparison. But that, too, takes us out of the static futures of much of science fiction.

For instance, even what we see as biology has become a choice. Women have given up the pain and power of giving birth, and children are born in gestating tanks. Men are also able to choose to nurse a child. From such deep thoughts as whether or not women really want to sacrifice our cartel of giving birth to such small innovations as treasure chests full of costumes that offer the pleasure of body decoration without barriers of money or gender, class or race, this novel not only points the way to the future as an extension of the past, but introduces possibilities still untried and unexplored.

As for that very hierarchical future, it rests on an airtight gender division that is even more recognizable now than it was when Marge Piercy first wrote this novel. For instance, women are divided into breeders who actually bear children and sexualized women with exaggerated breasts who are the companions and entertainers.

This was written before girls were getting breast implants for 16th birthdays, and before entire villages of women in India were surviving economically by gestating foreign embryos, and before terrorists of all stripes, from those bombing abortion clinics here to those beheading and bombing in Syria, were enshrining the cult of masculinity. I urge you to read Marge Piercy now—while we are still on the edge.

Download Woman on the Edge of Time by Marge Piercy. 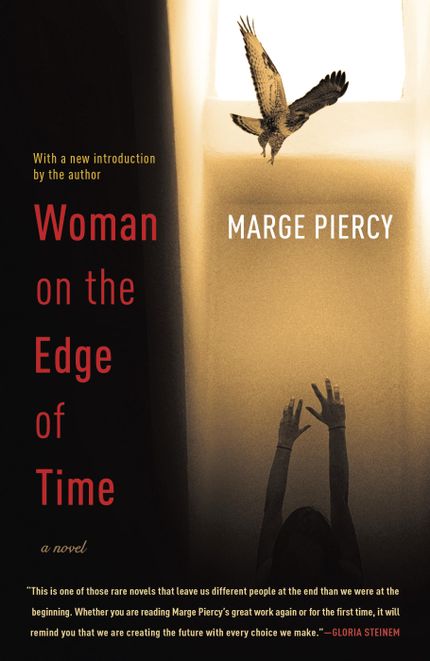 Featured image: 1977 edition of Woman on the Edge of Time