The Abolitionist’s Daughter takes readers inside a lesser-known history of the South during the 1850s and ‘60s.

In the lead up to the Civil War, Southern Abolitionists existed amongst cruel slave owners. Diane C. McPhail’s debut novel, The Abolitionist’s Daughter, transports readers to 1859 Mississippi, where the Matthews family are abolitionists. Judge Matthews runs an illegal school where he educates slaves—hoping one day he’ll be able to set them free. When his daughter Emily sees that a slave she knows, Nathan, is to be sold away from his family, she begs her father to save him. But neither Emily nor Judge Matthews could have predicted the impact Nathan and his family’s arrival has on them.

Simultaneously, Dr. Charles Slate courts Emily—hoping to make her his wife. The young doctor succeeds, but as the Civil War erupts around them, the couple—among other members of their family—face insurmountable loss. Emily knows what’s right, but finds it’s ever challenging to act on that in a world consumed by hatred and prejudice.

Diane C. McPhail’s “deeply felt, thoroughly researched story” pulls readers into a well-studied time period in American history and offers a different look at how certain groups were impacted by such tragic bloodshed (Jacquelyn Mitchard, author of The Deep End of the Ocean). The Abolitionist’s Daughter shines a new light on the Civil War and will have readers engrossed in these characters until the final page.

Read on for an excerpt from The Abolitionist’s Daughter, and then download the book. 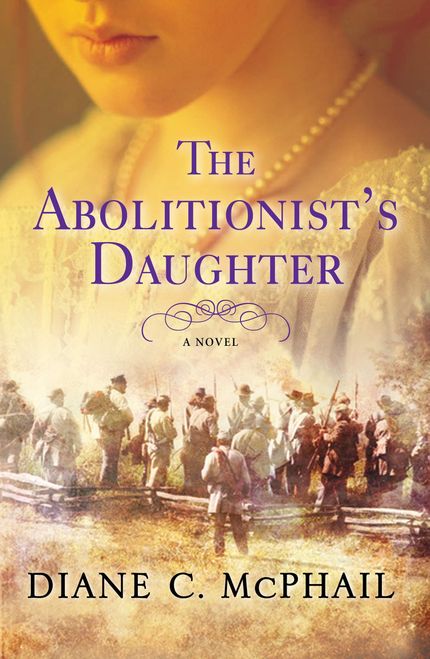 Heat hung fierce for spring over the town of Greensboro, Mississippi, the late sunlight flickering in dusty rays. A breeze that might have otherwise refreshed only added to the oppressive atmosphere, diving in gusts to trouble the crinolined skirts of the ladies along the boardwalk. Except for the few accompanied by personal slaves, the women struggled with their parcels as they clutched their bonnets close against a dry haze of dust unfurled in the wake of passing carts. Nailed to the livery stable, a slave auction notice snapped in the gritty air. At the sound two women halted on the boardwalk. Emily Matthews pressed a gloved finger to still the paper. A cluster of men nearby suspended their conversation to stare. Ignoring them, Emily jerked away from Ginny’s restraining grip and tore the poster from its nail.

“You best drop that thing, Miss Emily. Here, give it to me.” Fierce determination drove Ginny’s half whisper.

“Leave me be, Ginny.” Emily thrust the paper in crumpled folds deep into her pockets. “Papa must see this. Holbert Conklin is selling Nathan.”

“People’s watching you, Miss Emily. Leave it now. You gone get somebody killed.” Emily shook herself free of Ginny, grabbed at her hoops, and stepped down onto the dirt of the street.

In spite of sullen glances her direction, Emily shouldered through the dwindling afternoon crowd and negotiated her way through the fine buggies, plodding mules with clattering wagons, and the ever-present dung of Main Street. Ginny funneled behind her, eyes down, but missing nothing. Opposite the courthouse, Emily clasped the edge of her gray bonnet, squinting. She brandished the crumpled paper up at her father where he watched for her from his office, as he did every Friday. His hair and beard glowed white in the sunlit window, his eyes intense under the thick brows. He saw me, Emily thought, as she stepped onto the courthouse lawn. By the time the two women mounted the steps, Judge Matthews was locking the heavy front door, one arm loaded with law books. Emily restrained herself, but barely, as he ducked under her bonnet to kiss her cheek and smooth a loose strand of hair over her ear. He smiled and nodded to Ginny.

Emily thrust the notice at him. “This is a travesty, Papa. You must do something.” Though his antislavery stance took a heavy toll on them both in a town like Greensboro, she counted on that foundation.

He shook the rumpled paper flat. Ginny clutched the unstable law books, as Emily peered over her father’s sleeve, her hand fisted against his arm. He retrieved his spectacles from a pocket, flicked them open, and adjusted them on his nose, where they magnified the intensity of his almost-brown eyes.

TO BE SOLD & LET, By Public Auction,

For Sale, THE THREE FOLLOWING SLAVES:

Nathan, a 30-year-old buck and excellent hand of Good Character

with some training as a household servant

He got no further as Emily jabbed at the words. “Nathan has a wife and two children,” she said. “I see them when I call on Virginia. Conklin’s going to tear that family apart. He cares nothing for family, including his own. He’s a despicable man, Papa. And cruel.” She glanced at Ginny. “Virginia never speaks of it, but I see her bruises. The ones she can’t cover and more than ordinary life accounts for.”

Judge Matthews folded the notice and retrieved his books. “Thank you, Ginny.”

The judge knew Conklin well—an unwelcome, perhaps even dangerous, cohort of his son, Jeremiah. Silence enveloped the three as they jolted over the rutted road home. First father, then daughter commenced to speak, but stopped, their utterances incomplete.

“He is a vile man, Papa,” Emily said, as he helped her from the buggy. Evil was the word she wanted to use. “Can you stop him?”

He hefted the law books from the wagon and held a hand to Ginny. “I’ll do what I can.”

Jessie pulled the ripped dress around her frail torso and shivered. Morning was moving toward the horizon. She stood on the unpainted porch, her eyes blank, not seeing her children’s red ball in the dusty yard, the pile of rocks she hauled up from the creek yesterday to line the front walkway, nor the broom abandoned in panic. Jessie did not see her own shoe on the sagging step, caught there as she fled Holbert Conklin.

Her dark eyes saw nothing before her, her mind seeing only what had befallen her in the cabin behind: the heavy white hands, freckled like dirty snow; a straggling lock of reddish hair over the icy eyes that burned into her naked flesh; and her own hand gripping the post of the bed Nathan had built her from scrap. Today she would lose him, perhaps forever. He would never need to know this thing that had happened.

She spun back into the cabin with its single room, closed the door, wrenched the coarse sheet from the bed, and piled it on the floor. Heaving, she collapsed onto the violated fabric of her rough mattress. As her body quieted, she rose. She stripped off her torn dress, dipped the barest edge of it in the water bucket by the door, and wiped the blood from her legs. Removing her other shift from its peg, she pulled it hard over her thin body and threw the damp remains of her dress on top of the mounded sheet.

Out back, she gathered an armload of fallen branches, ignoring the sharp twigs digging into her flesh. She stacked them, one by one, on the banked coals from the night before and blew into the fireplace, coughing from the dust and ashes. A flame sputtered. As the kindling caught, Jessie shifted on her haunches, but without relief from the pain. She held the wet edge of the ruined dress over the flame. When it was dry enough, Jessie laid it on the growing fire. With her teeth, she tore the edge of the sheet, ripped it down its length, and fed the two halves into the flames.

When the last of the fabric caught, Jessie stood. Holding the bedpost, she gazed around the cabin. Blood stained the ticking of the corn shuck mattress. With rag and lye soap, Jessie scrubbed the stains in narrowing circles. She took clean water and reversed the spirals, rinsing away the soap. But not the stain, not all of it.

Outside, Jessie dropped the rag in the dirt and started up the lane toward Auntie Clara’s. A cluster of children, including her own, too young for the field, played in the early dawn around the old woman’s cabin. As Jessie came into the yard, Auntie Clara shushed a boy’s wails and brushed dirt from his knees.

“Auntie, I needs your help.” Jessie looked down at the boy, who stopped crying and ran. “I needs a bedcover.”

In this excerpt, Emily is furious to find that Nathan is going to be sold. Though Ginny, the Matthews family’s slave and Emily’s close companion, tries to help her maintain her composure, the thought of anyone being ripped away from their family is too much for Emily to bear. At the same time, Jessie, Nathan’s wife, is reeling from a terrifying assault inflicted on her by her cruel master Holbert Conklin. Desperate to hide the evidence, she feels doubly upset due to the fact that Nathan is supposed to be sold. Little does she know: Judge Matthews has a plan to save Nathan and his family.