Aretha Franklin: The Queen of Soul Has Died at 76

Read an excerpt from this music legend’s biography.

On August 16, 2018, legendary singer Aretha Franklin passed away. It was reported earlier in the week that she was experiencing complications from pancreatic cancer and her health was rapidly declining. The singer-songwriter leaves behind a robust career—from her signature song, a cover of Otis Redding’s “Respect,” to being the first woman inducted into the Rock and Roll Hall of Fame in 1987.

Aretha Franklin was born on March 25, 1942 in Memphis, Tennessee, and grew up in Detroit. Franklin’s mother, Barbara Siggers Franklin was a piano player and vocalist, and, though she died before Franklin’s 10th birthday, the music legend learned to play the piano by ear at a young age. She got her start performing gospel music in churches—her father was a prominent preacher—before pursuing pop music in New York City during the early 1960s. Released in 1961, Franklin’s first single to hit the Billboard Hot 100 was “Won’t Be Long”—peaking at number seven on the R&B chart.

After six years with Columbia Records, Franklin signed to Atlantic Records in 1966.  She scored her first number-one hit on the R&B chart in 1967 with “I Never Loved a Man (The Way I Love You),” which also reached number nine on the Billboard Hot 100. In April of the same year, “Respect” was released, which reached number one on both the R&B and pop charts—thus skyrocketing Franklin to commercial fame.

The height of Franklin’s music production took place during the late 1960s and ‘70s. During her lifetime, she won 18 Grammy Awards—including numerous awards for Best Female R&B Vocal Performance. She took home the prize consistently from 1968-1975 for hits including “Respect,” “Chain of Fools,” and “To Be Young, Gifted and Black.” Additionally, she’s received a Legend Award (1991) and a Lifetime Achievement Award (1994) from the Grammys.

Franklin’s contributions to the music world will never be forgotten. After her performance of “A Natural Woman” at the 2015 Kennedy Center Honors, President Obama said, “American history wells up when Aretha sings. Nobody embodies more fully the connection between the African-American spiritual, the blues, R&B, rock and roll—the way that hardship and sorrow were transformed into something full of beauty and vitality and hope.”

Mark Bego recounts Franklin’s life in Aretha Franklin: The Queen of Soul. In his biography, he examines her beginnings as a 12-year-old singing in church choir to becoming one of the most revered singers of the 20th century. Using in-person interviews with those close to the singer—as well as with Franklin herself—the author dives headfirst into the life of the “Queen of Soul.”

Click here to read an excerpt from Aretha Franklin: The Queen of Soul, by Mark Bego. 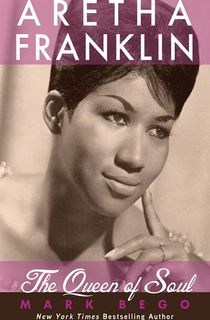