EXCERPT: Aretha Franklin: The Queen of Soul, by Mark Bego

Nicknamed the "Queen of Soul," Franklin is one of the most beloved artists of the twentieth century. 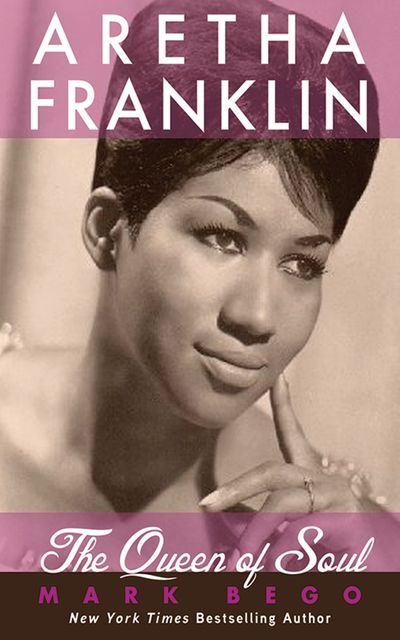 It is a hot July afternoon in suburban Detroit, in 1985. Aretha Franklin is comfortably seated next to me on one part of the dark brown ultrasuede sectional sofa that winds its way across her spacious and modern living room. Through the sliding glass doors I can see the tree-lined backyard. Outside, a warm summer breeze sends a ripple across the surface of the huge swimming pool.

Aretha is smoking a Kool cigarette, and she takes an occasional sip from her glass of ginger ale. It strikes me as odd to be sitting next to a woman whose voice I have spent years admiring, and to watch her chain-smoke. After years of going through two packs of cigarettes a day, for Aretha it is still a habit that she can’t seem to break.

The room is painted a creamy shade of off-white, and several walls are hung with framed Gold records and laudatory citations. Behind us is a black grand piano, and on top of it sit several gold statuettes and an impressive bust of a woman. The short gold statuettes are just a few of her many Grammy Awards, and the bust is of Egyptian Queen Nefertiti, who is Aretha’s favorite historical figure. On the shelf by the fireplace, there are two clear Lucite obelisks, which are better known as American Music Awards. Across the cream-colored wall-to-wall carpeting and against another wall, is a modern-looking entertainment center complete with a stereo and a wide-screen television set on which Aretha watches her favorite soap operas. Fresh-cut flowers are arranged in vases, and a recent portrait of Aretha is framed and hung on one of the walls.

With her well-manicured fingernails she plays with her gold necklace as she prepares to reflect on her long and eventful career in show business. She is dressed in a casual but smart blue pantsuit, and on one of her fingers she wears a large rectangular art deco ring, sparkling with dozens of diamonds.

Aretha takes one last drag from her cigarette, and stamps it out in a large ashtray on the coffee table before her. It is the signal that she is now ready to begin a rare press interview.

After over thirty years as a singing star, she’s known around the world. In Italy she is called “La Regina del Soul.” In France she is referred to as “Aretha Franklin La Magnifique.” She is also known as “Sister Ree,” “Lady Soul,” “La Diva Franklin,” and “The Queen of Soul.” But to her millions of followers, the one word “Aretha” says it all. She is the most celebrated female artist in the history of recorded music. With more Grammy Awards and Top Ten chart hits than any other woman in the realms of rock & roll, pop, jazz, soul, or gospel music, her career is definitely one of legendary proportions.

She began singing in the choir at her father’s church at an early age. “I love gospel music!” Aretha proclaimed in our interview. “Gospel music means everything to me. It certainly was part of my beginnings, the church being my background.” When she found stardom in the late 1960s, she embodied the heart and the sound of “soul” music. She became a symbol of black pride, and her songs spoke of unbridled passion and heartbreak.

I found that Aretha especially glowed when she talked about her glory days at Atlantic Records in the 1960s and 1970s. “Jerry Wexler signed me to the Atlantic label,” she recounted proudly that afternoon, “and of course I had many, many great days in the studio with him. ‘Respect’ was produced by Jerry Wexler, who produced so many hits for me. And there was [co-producer] Arif Mardin, whom I love and love to work with. Magic things happen when Arif and I work together. And let’s see: [recording engineer] Tommy Dowd, who I think is just one of the best in the business. That man can do things—editing with tape—that I have never seen before.”

Her image has been largely shaped by the songs that have made her famous. She is the uncompromising “earth mother” who is steadfast and strong. Her singing is blisteringly honest and charged with emotion. Her voice is unmistakably pure, unrestrained, and soul-stirring. The mention of her name cultivates a vivid mental picture of Aretha—the Survivor. It is easy to envision her as the no-nonsense woman, musically commanding “Respect,” threatening her man that he’d better “Think” before he looks at another woman, announcing that she has discovered “The Spirit in the Dark,” or enticing someone to take a ride on “The Freeway of Love.” However, Aretha’s shattering encounters with personal tragedy and pain have earned her the right to sing the blues as well.

Aretha has so much for which to be thankful. She possesses one of the most emotionally expressive five-octave voices of the rock era. She has been able to span three decades with Number One hit records, from 1967’s “Respect” to 1987’s “I Knew You Were Waiting (For Me).” The royal command performance, the unsurpassed total of twenty Grammy Awards, the movie and video performances, the sold-out concerts, the white Rolls-Royces and pink Cadillacs, and the highly publicized romances that stardom has brought her, are all part of the glamorous life she has led.

Yet, on the other side of the coin, Aretha’s life hasn’t been one long joy ride down “The Freeway of Love.” Fate has thrown several obstacles into her path that have caused her anguish. Desperation, domination, disappointment, prejudice, frustration, teenage pregnancy, weight problems, and devastating emotional trauma are all part of her closely guarded private life.

In Jerry Wexler’s eyes, Aretha’s personal life is so sad that he refers to her as “the mysterious lady of sorrow.” Clyde Otis claims that he was amazed she could sing at all in the sixties because she was so depressed that she appeared to be carrying the weight of the whole world on her shoulders. John Hammond once said that Aretha had “terrible luck” with the men in her life, and that they all made her suffer.

Although she bears several emotional scars, Aretha Franklin is clearly a survivor—not only in her career, but in her personal life as well. Although she has experienced a lifelong series of personal tragedies and disappointments, for each of her emotional low points, she has overcome her pain by channeling her frustration into creative energy. In turn, her determination has made her into an enduring star. The erratic highs and lows of her life—public and private—have obviously given her an inner strength that is both powerful and inspiring. Her inner faith has seen her through the worst of times.