Because the producers have basically killed off half of Westeros by now.

At last, our patience has paid off! HBO’s highly anticipated Emmy award-winning show Game of Thrones—based on the Song of Ice and Fire series by George R. R. Martin—returns to HBO on April 24. And with its return we are reminded of how many of our favorite characters won’t be gracing our screens this season … or ever again. From Ned Stark to Oberyn Martell, George R. R. Martin and HBO producers David Benioff and D. B. Weiss have basically killed off half of Westeros by now—repeatedly stomping on our hearts in the process. Though some of these characters’ bannermen don’t fly the Stark colors, they have left a searing hole where our hearts used to be.

So if you’re still grieving the deaths of your favorite characters, we’ve come to the rescue with these eight remarkable characters to fill those Stark-shaped holes in your heart.

*SPOILER ALERT* If you aren’t yet caught up with the current season of Game of Thrones and/or Martin’s books, we urge you to read on with caution. 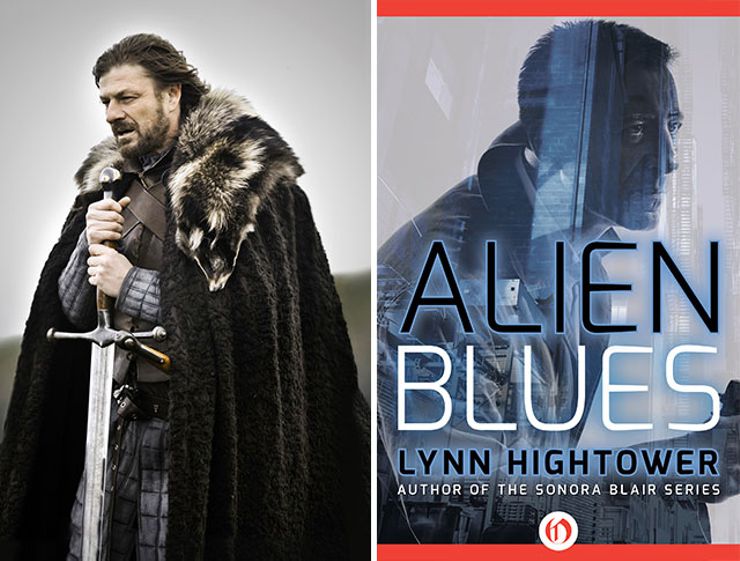 Ned Stark was our first loss, and the catalyst for all the war and turmoil the Seven Kingdoms has seen since. When Joffrey ordered his execution, Martin showed us what was in store for the good guys in his series—basically, they’re sh*t out of luck.

To assuage your grief, we recommend noble David Silver, from Lynn Hightower’s science fiction book Alien Blues. Sworn to uphold the law and fiercely protective of his wife and children, David fights against injustice and law-breakers on every side as a homicide detective in near-future Saigo City. Alien Blues, first in the Elaki series, is a twisting, complex crime tale with intriguing characters, including David’s DEA-turned-enforcer wife, Rose, and an alien named the Puzzle Solver. Game of Thrones fans will love this action-packed series lead by one of the good guys.

Robb Stark was the honorable knight who ruled his men with a strong heart and keen mind. He was King of the North and would-be King of Westeros … until the Red Wedding. (Still haven’t forgiven you for that, Martin. Not cool.)

Only a gentleman who is equally honest and brave can compare. Jamie Fraser from Diana Gabaldon’s Outlander series is the perfect match. Jamie is the outlawed Scottish laird in 1700s Scotland whom Claire Beauchamp meets when she is inexplicably transported back in time. A soldier with the Clan MacKenzie, Jamie has fought against the British countless times, the result of which left him scarred by 100 brutal lashes. He is a master swordsman and a gentleman—not to mention dashingly handsome. Although the Outlander series is marketed as a romance, it is full of action, violence, and historical drama that will delight fans who love the historical feel of Martin’s series. 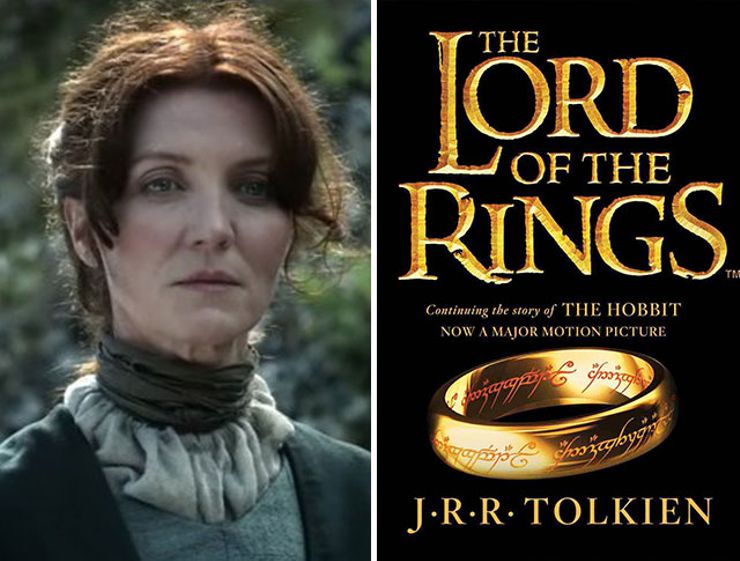 Catelyn was yet another Stark who wasn’t allowed to have a happy ending. (Seriously, leave the Starks alone, Martin!) She was brave, an overprotective mother, and … maybe a little stubborn. She could sure hold a grudge, as was evident in the way she treated Jon Snow, her husband’s bastard child. There’s also that plotline in the books where she enacts revenge against the perpetrators of the Red Wedding: Lady Stoneheart, anyone?

We know a similar brave—yet stubborn—woman who is perfect for you: Eowyn from J. R. R. Tolkien’s The Lord of the Rings trilogy. Eowyn is the noblewoman and shieldmaiden who stubbornly refuses to follow orders to remain in Rohan during the War of the Ring. Instead, she pretends to be a man and sneaks in among the infantry to fight Sauron’s army of orcs and help the Fellowship save Middle Earth. If you love the badass women of Game of Thrones, you will love Eowyn in this classic epic trilogy from the Father of High Fantasy. 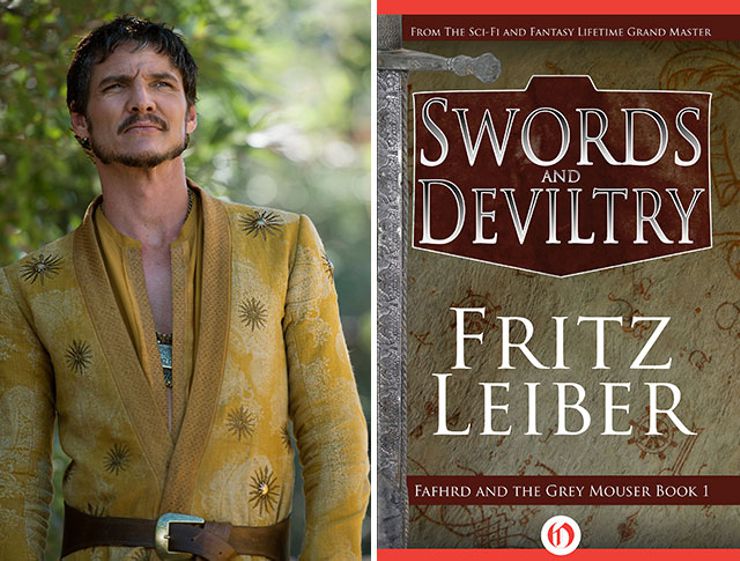 Oberyn, you sexy man, we miss you! Although he wasn’t with us for very long, the Dornish nobleman won our hearts with his awesome spear-fighting skills and his cocky rapport. His gruesome and untimely death shocked and saddened us all.

It may take two men to take his place. We suggest Fafhrd and the Gray Mouser from Fritz Leiber’s Nebula Award-winning high fantasy novel Swords and Deviltry. Fafhrd is the son of a northern snow witch, queen of her people; the Gray Mouser is an apprentice magician and an accomplished thief. Both are expert swordsmen who spend a lot of time drinking, feasting, wenching, brawling, stealing, and gambling, and are seldom fussy about who hires their swords. But they do have morals and—most of all—relish true adventure. Game of Thrones fans will love these rogues who echo Oberyn’s more unabashed wild side. 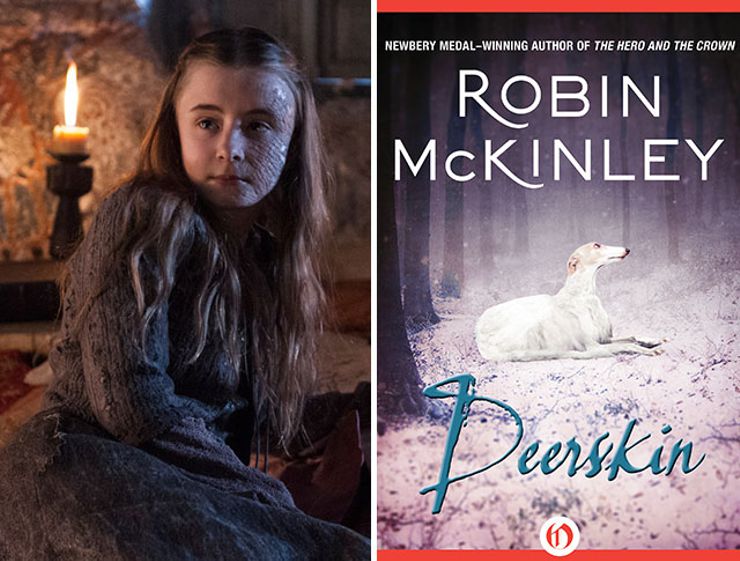 Poor Shireen was saddled with the worst parents in Westeros—and considering Cersei had three kids, that’s saying something. As we all remember (and probably will never unsee), Shireen was sentenced to burn at the stake by her own father while her mother watched. Like I said, the worst.

As you mourn sweet, innocent Shireen, we offer you Princess Lissla from award-winning author Robin McKinley’s dark fantasy novel Deerskin. Lissla also has a dysfunctional family. Her father, distraught at the death of his beautiful queen, decides to marry his own daughter in her place. To save her sanity and her identity, Lissla must flee her home and make her own way in the world. If only Shireen had had that same chance. 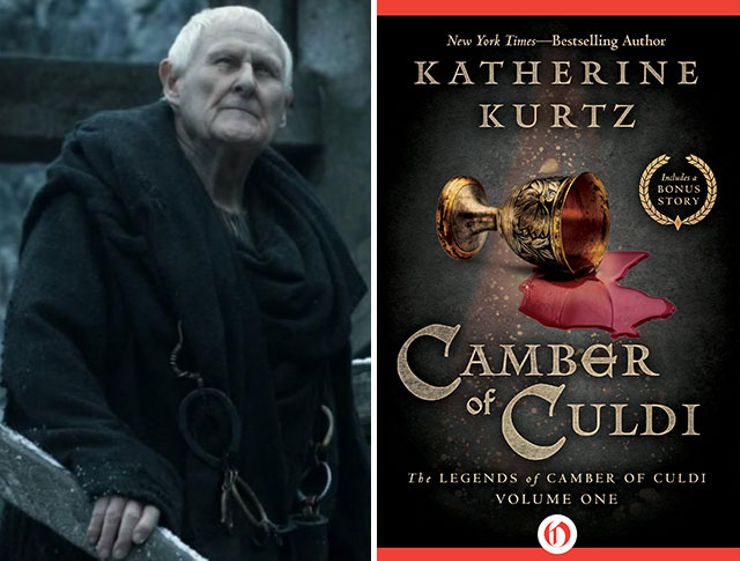 Maester Aemon was the wise, blind grandfather figure who guided Sam and Jon in the Night’s Watch. He was also one of the only people in Westeros lucky enough to die peacefully of old age. Seriously, he deserves a medal for that achievement.

There’s another man you may love who bestows similar wisdom and guidance: Camber from Katherine Kurtz’s Camber of Culdi, book one in the classic fantasy series The Legends of Camber of Culdi. Long before Camber was revered as a saint, he was a Deryni noble, one of the most respected of the magical race whose arcane skills set them apart from ordinary humans in the kingdom of Gwynedd. As the land suffers under a tyrannical king, Camber must travel far from home to find the last descendant of a line of kings who can inherit the throne and save the kingdom. Unlike Maester Aemon, who could not leave the Wall to save his Targaryen family during the War of the Usurper, here we have a man with the chance to make a difference in his kingdom once again. 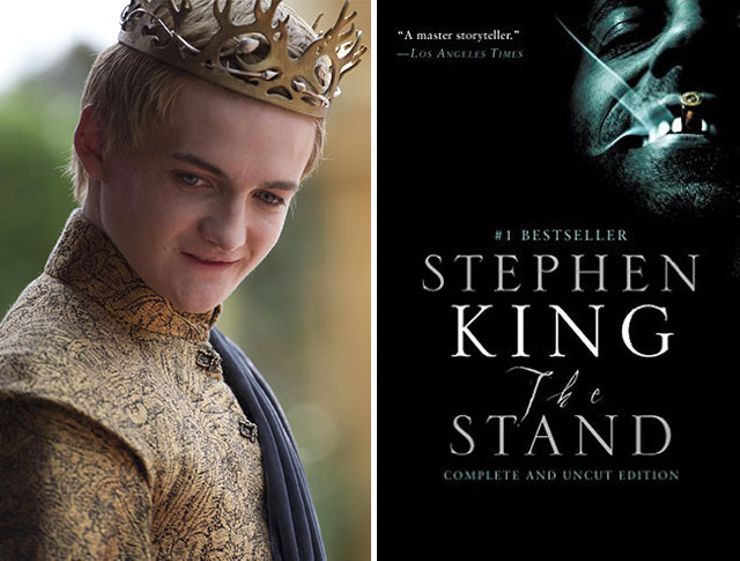 Oh, Joffrey. How we loved to hate you. But mostly, we just hated you. One of the most despised fictional characters of all time, Joffrey murdered and tormented some of our favorites—as well as anyone and everyone else he could get his hands on.

You probably don’t miss him (unless you’re a sadistic psychopath…) but if you miss hating him, here’s another awful character you can direct your loathing to: Randall Flagg from Stephen King’s post-apocalyptic horror fantasy novel The Stand. In the aftermath of a viral pandemic that wipes out 99% of the world’s population, groups of survivors have banded together in diverse areas of the United States in an attempt to recreate a stable society. Randall Flagg is the brutally tyrannical leader of one of these societies, using gruesome methods of torture and execution to quell dissent. And to top it all off, if you thought Joffrey was pure evil, Randall is the literal embodiment of evil, with supernatural powers and bad taste in cowboy boots. Talk about a loathsome character! 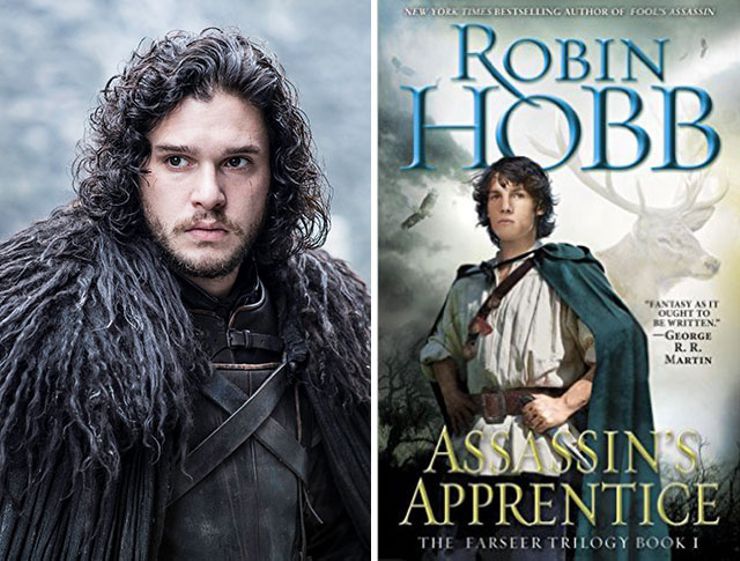 Season five ended with Jon Snow’s betrayal by the Night’s Watch, collapsed in a bloody heap after being brutally stabbed multiple times. But the show left it unclear as to whether he actually died…although those stab wounds didn’t look too good.

So if he’s really dead (we’re still in denial), another brave and honorable character you can root for is Fitz from the high fantasy novel Assassin’s Apprentice, book one in the Farseer Trilogy by Robin Hobb. Fitz is the bastard son of the noble Prince Chivalry and a “Wit” who possesses an ancient and distrusted magic that allows him to bond telepathically with animals—in this case, a wolf. Game of Thrones fans will enjoy watching the outcast-turned-hero fight for his place in the world, as we wished Jon Snow could have done. 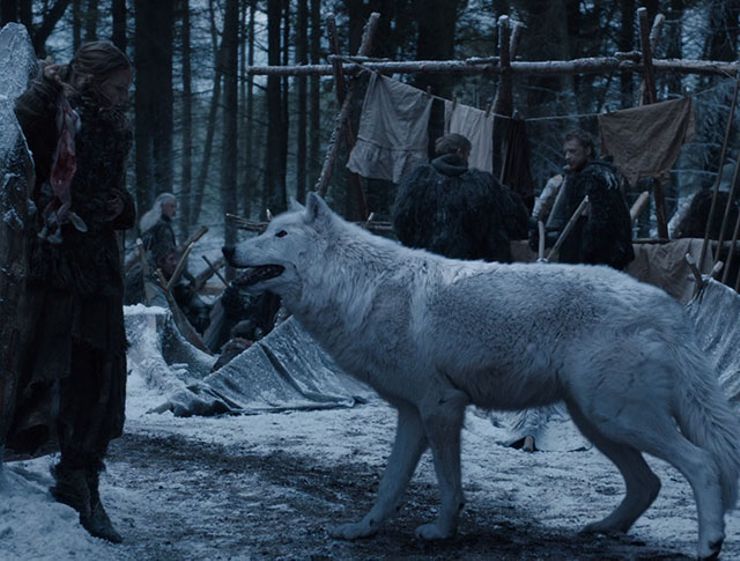 Though the fate of some of the Stark wolves is unclear or yet unknown, we can say for certain that Sansa and Rob’s wolves have long passed on.

If you miss those majestic dire wolves and wish you had one of your own, how about trying an intelligent wolf who can fight and communicate with his human best friend?Nighteyes the wolf from the previously mentioned Assassin’s Apprentice by Robin Hobb may be the right fit. Nighteyes is the large wolf Wit-companion to Fitz. Just like the dire wolves with the Starks, Nighteyes loyally fights with Fitz during dangerous missions—and provides humorous commentary along the way.

All stills from Game of Thrones courtesy of HBO.