The Only Family More Notorious than the Lannisters

In City of God, Cecelia Holland explores the dark and powerful world of Italy's original crime family: The Borgias.

Cecelia Holland is the author of 21 historical novels. Nowhere is the mastery of her craft as a storyteller more apparent than in City of God, her novel of Italy’s most notorious family, even more notorious than the Lannisters: The Borgias. With dark and complex motivations, these characters navigate the dangerous political landscape of 16th century Rome.

City of God is told from the perspective of Nicholas Dawson, a young man who comes to Rome full of dreams and dark ambition. To rise where the Borgias rule the “city of God” with violence and manipulation, he must craft a flexible but powerful persona in a culture where one misstep could mean death.

Nicholas is the master of his emotions until he becomes attracted to a dangerous young man. Swept up in the Borgias’ political game, he quickly finds that a lust for power and pleasure may be his downfall.

Preview Nicholas’ turbulent world with the excerpt from City of God below, and then download the book! 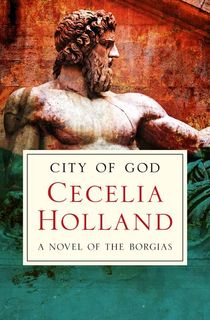 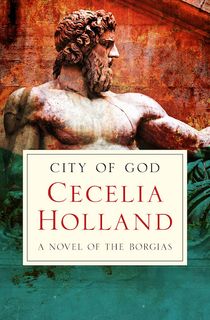 The sky was moonless, sprinkled with stars sparkling in their subtle colors, and the air was humid and warm. Tomorrow would be a hot day, the first day of the summer. Nicholas enjoyed the walk, only wishing that he had his walking stick. He had seldom needed its support but the feel of the knob and the sound tapping in the road had added something to the walk. Also he thought that it made him look more interesting. He was crossing the piazza below the Campidoglio when he noticed several men following him.

He stopped at once. From here the way was narrow and dark, and he knew better than to lead a pack into such a place. Immediately the men surrounded him.

“Don’t be foolish,” Nicholas said. “The watch will come by at any moment.”

There were four of them, all standing very close to him. He opened his hands and closed them again.

Something hard struck his arm from behind, numbing it to the elbow. “Get your hands up!”

He put up his hands. They could see he had no weapon, nothing but his tongue, which ran out of control.

“I have no money. You’re wasting your time. The watch will come by any moment now.”

A blow on the side of the head knocked him to the street. He knew they would kill him. He had come so happily, so innocently to this.

“Il Bello is a bad man to run against.”

“He says he has no money anyway.”

They were going. They were leaving him alone there. Disbelieving, he lifted his head, and the last to go cast him an angry look and swung his foot at him, which Nicholas dodged by rolling over. Now that man too was hurrying away across the empty piazza.

In the tower of the Aracoeli, up on the hill, a bell began to toll.

Nicholas stood up, his coat filthy with grit and his left arm still a lump without feeling. Il Bello: Stefano. He tugged at his clothes. His hose was torn on one knee and he had lost a shoe. All the bells in Rome were beginning to toll around him and he could hear the monks assembling on the stairs of the Aracoeli, behind him, but he did not turn.

Stefano: Il Bello. He began to walk painfully toward his home. It didn’t matter, really. Stefano did not matter, and it was a weakness to long for him, especially now, when at last Nicholas’s own influence and work were of weight in Rome. That was important, not Stefano. He lifted his head up, he was walking along under the trees that lined the street toward the Colosseo, and the dusty air pent under their broad canopies brushed over his face. His arm was tingling to life again, throbbing. His life he owed to Stefano, whom he had cast out. He dragged himself painfully back to his house, where Juan would care for him.

Fixed as usual on the recovery of Pisa, the Florentine Signory paid little heed to the rebellion in Arezzo, although Nicholas wrote two letters describing the situation there as needing quick action. Then in the height of the summer, Piero de’ Medici, head of the exiled house, entered Arezzo with Vitellozzo Vitelli, a captain of Valentino’s who owed the Signory a blood debt for the killing of his brother; the Aretines packed the streets to cheer them all the way to the palace. The Signory panicked. A courier rushed orders to the Florentine ambassador with the French king to plead for help, and duly enough King Louis sent orders to his troops in Milan to support the city against Valentino.

Talk of this dominated every gathering in Italy through the summer. No one marked it especially when Duke Valentino, with the cannon borrowed from his new ally Guidobaldo da Urbino, marched away across Guidobaldo’s territory to attack Camerino.

In the heat of the summer night Nicholas slept in snatches, tormented by dreams. He woke once before midnight and went out to the kitchen for a cool glass of wine to settle his sleep. Juan slept on his cot in the narrow space between the wall and the wooden table. Nicholas slipped past him; the old man turned and broke into a hollow snore. Nicholas drank his wine and returned to his bed.

Yet he did not sleep. He lay on his back, thinking of Stefano.

Somewhere nearby a dog began to bark. Nicholas rolled over; the sound penetrated his ears like thorns. He rolled over again, trying to stop his ears with the pillow. The light sheet slid off his body and he clutched at it and pulled it up over his shoulders.

Under the racket of the dog another sound reached him, much nearer. He sat up in his bed, his ears stretching. Someone was walking about in the garden outside his house. He remembered the time that Stefano had broken into the house, but then he had not been alone. Perhaps it was Stefano. He pulled on his dressing gown and stuffed his feet into house shoes. If it were Stefano—if it were not Stefano—he opened the door enough to put his head out and scan the main room.

It was as he had left it; one candle burned in the iron bracket by the front door. Nicholas went across the room to make certain that the door was locked.

Just as he reached it the door swung open. He stopped. Miguelito stood there on the step.

Nicholas said, “What do you want with me?”

Miguelito came by him into the room. He wore a long black traveling coat; his muddy boots left a trail on the floor. He flung his hat off across the room.

“I have come from Urbino,” Miguelito said.

“Ah,” Nicholas said, and was out of breath.

“It worked,” Miguelito said. “Guidobaldo fled, Urbino belongs to Cesare Borgia. Who sends you this, with his respects.”

He gave Nicholas a ring.

He closed his fingers over the heavy jewel. A hot delirium welled up in his mind, a triumph almost like sex. He smiled, and Miguelito smiled too, a sudden bright unexpected flash of teeth.

Featured Photo: Promotional poster for "The Borgias" (2011), via Showtime