Ending a Sentence with a Preposition & More Grammar Myths Busted

Everything you learned in school is a lie. But who is behind this grammar conspiracy?

In grade school, many of us were told that ending a sentence with a preposition is wrong. But according to English composition expert Jenny Baranick, that’s a big fat lie. And preposition placement is not the only way we’ve been led astray.

“We’ve been believing the grammar quacks for years,” says Baranick, author of Kiss My Asterisk, a grammar guide to the English language that’s as hilarious and sassy as it is helpful. What are these grammar myths and who is responsible for these common misconceptions? Baranick has some theories. Read on to find out why the wedding industry and other seemingly random interest groups are behind some of the grammar rules you learned in school.

Related: Books We Wish We Read in High School 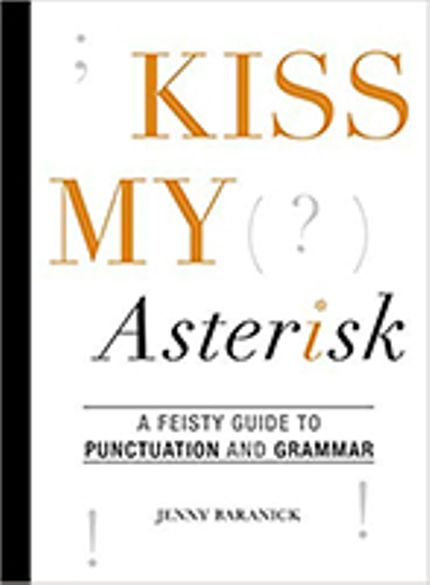 Author Jenny Baranick is an English professor whose students can’t believe she’s actually that into grammar. Upon experiencing the joys of grammar at an early age, raising grammar awareness became Jenny’s raison d’être. By spreading her remarkably user-friendly and hilarious approach to grammar, she hopes everyone will experience the satisfaction of a properly placed comma, a precisely used semicolon, and a correctly deployed en dash. Buy on Amazon.

Jenny Baranick: Sometimes when I am standing in front of a classroom full of students, I get drunk.

Not drunk with alcohol, my friends—drunk with power. These students, I think to myself, will believe anything I tell them about grammar because I am their grammar teacher. I could tell them that it’s grammatically incorrect to start a sentence with the word Tuesday between 10 AM and 3 PM on every second Tuesday because of street sweeping. I could tell them that three exclamation points are required after every sentence that includes the word snowman on Christmas Day.

How do I know they’d believe me? Because we’ve been believing grammar quacks for years. Since the eighteenth century, there have been various special interest groups spreading grammar myths to achieve their dubious purposes. And we’ve largely accepted these myths as truth.

However, it’s time to bust these myths open and expose the following special interest groups as the lie-spreading machines that they are:

One of these Latin lovers was an eighteenth-century English clergyman named Robert Lowth. His understanding of grammar was based largely on the study of Latin, which would have been fine except for the fact that he decided to carpe diem and write a largely influential English grammar book based on Latin rules. One such rule he propagated was that we must never end a sentence with a preposition.

A preposition is a word that typically indicates time or space. Some that we commonly use to end sentences are at, for, with, from, in, and on.

This is a sentence that ends in a preposition:

I left my door unlocked so Don Juan could sneak in.

I left my door unlocked so in Don Juan could sneak.

I don’t know about you, but if someone said that to me, I’d kind of want to punch them in their pretentious little mouth.

Not only can rearranging our sentences to avoid ending them in prepositions sound pretentious, it’s also unnecessary. Grammar experts agree that it’s perfectly acceptable to end sentences in prepositions.

It is, however, grammatically incorrect to end a sentence with a preposition if the preposition is unnecessary.

In the example above, we needed the preposition because without it the sentence wouldn’t make sense:

I left my door unlocked so Don Juan can sneak.

However, in the following sentence, the preposition is unnecessary:

When Don Juan left, he asked, “Do you know where I left my sword at?”

If we leave off the at, the sentence still makes sense:

When Don Juan left, he asked, “Do you know where I left my sword?”

So Don Juan’s use of the preposition was wrong.

But English is his second language, so be easy on him. He’s learning.

I’m not just a crazy conspiracy theorist. Hear me out:

Sentences, much like couples, have ways to demonstrate their relationship statuses. Couples use engagement and wedding rings; sentences use transitional words and phrases.

Here are some common transitional words and phrases:

By beginning a sentence with a transitional word, the sentence is telling the world about its relationship with the sentence that it follows.

For example, if a sentence begins with the word furthermore, it’s letting everyone know that it is giving additional information about what was said in the previous sentence:

I must have swans at my wedding. Furthermore, I would like doves.

If a sentence starts with the word however, its relationship will be “in spite of” what was stated in the previous sentence:

Doves will break our budget. However, I think they’re worth it.

I love transitional words and phrases like the ones listed above. I use them all the time, and I highly recommend you use them too. But there are times when I find those particular words a tad too formal for the writing style I am trying to achieve, and that’s when I like to start my sentences with the more informal transitional words and and but.

If we don’t have a wedding and just move in together, we will save thousands of dollars. And we will save on rent.

My parents think that we should get married. But I think that marriage is just a contract.

The good news is that, despite what the wedding industry would have you believe, it’s grammatically acceptable to create less formal relationships between sentences by beginning them with and and but.

Swans, however, are a must!

If the following exchanges sound familiar to you, you’ll understand why teenagers started the rumor that it’s wrong to start a sentence with the word because:

Teen: Dad, can I go to a concert tonight with my friends?

Dad: No, you have to finish your homework.

Teen: I’m done with my homework.

Teen: This one is at my friend’s church.

Dad: Will there be adults there?

Teen: It will be mostly adults.

Dad: Because I said so.

Obviously, teens have spread this rumor in an attempt to prevent their parents from uttering the most frustrating combination of words in the entire world: because I said so.

I had to stay home on Friday night. Because my lame dad wouldn’t let me go to the concert. My friends all think I am a total dork.

Because my lame dad wouldn’t let me go to the concert is not a complete sentence. However, if we connect it to the sentence that follows it, it is:

Because my lame dad wouldn’t let me go to the concert, my friends all think I am a total dork.

When a sentence starts with the word because, it will be the kind of sentence that we talked about in the comma chapter on page 51. It will have the following structure:

So, teens, let’s compromise. Instead of spreading the myth that we can NEVER start a sentence with the word because, let’s say that because will never start a sentence when it doesn’t begin an introductory phrase that is followed by a comma and a complete sentence.

It’s a win/win. I get to promote grammatical correctness and “because I said so” is still grammatically incorrect.

Want more grammar books? Sign up for the Early Bird Books newsletter and get the best daily ebook deals delivered straight to your inbox.

Health freaks like to push wellness. When these people are offered a cookie, they don’t automatically stuff it in their mouth; they decline it based on its caloric and saturated fat content.

These health freaks must be the ones who started the false rumor that it’s grammatically incorrect to answer the question “how are you?” with “good” instead of “well.”

I don’t think they did it maliciously. It’s just that to these people, health is the only thing that matters. So when someone asks them how they are, they simply assume that the person is inquiring about the state of their health. Consequently, they answer “I’m well.”

But we will be fantastic after that cookie, tequila, and bacon!

Congratulations! You are now part of the Right Club. You now know that you are perfectly in the right to express yourself in ways that others have tried to convince you are wrong.

The first rule of Right Club, however, is that not everyone knows about the Right Club. This means that even though you know you are right, other people may still believe these myths and think you are wrong. These other people may include your bosses, teachers, and clients.

So until these grammatical truths become common knowledge, when your boss asks how you are, perhaps you want to answer as though he or she is inquiring after your health.

For more feisty fun with punctuation and grammar, download Kiss My Asterisk on Amazon, Barnes & Noble, and iTunes.