Fathering a Chess Prodigy: An Excerpt From Searching for Bobby Fischer

How hard do you push your child to develop their potential?

For those of us who are parents, it can be strange to see our children surpass us. They become physically stronger, more tech savvy, and it gets harder and harder to help them with their homework. For most, this doesn’t start happening until kids reach their teens. But for some it comes early when, at four, five, or six, a child begins to display the early sparks of brilliance. For Fred Waitzkin, author of Searching for Bobby Fischer, this day came after he began playing chess with his young son Joshua. At first he feels guilty delivering crushing defeats to his young son, but at the tender age of six, the tables turn and Josh begins to beat his father. And other far more skilled adult chess players.

For Waitzkin and other parents of bright kids, a question soon looms. How hard do you push your child to develop their potential? What are the values of a “normal” childhood?

Searching for Bobby Fischer explores these questions in the context of the surprisingly intense world of competitive chess. In the excerpt below, Waitzkin recounts the discovery that his son may be a chess prodigy.

Looking to discover new and classic ebooks? Subscribe to Early Bird Books to receive offers for free and discounted ebooks, delivered daily to your inbox.

In the spring of 1984, at the National Elementary Chess Championship in Syracuse, New York, a distraught father began to whisper moves to his son. Across the gymnasium floor, scores of other parents crowded close to the chessboards and nervously discussed the games within earshot of the players. Some of the six-, seven- and eight-year-old children asked the parents to be quiet and to give them room to play. Two frustrated fathers began shoving each other, and one took a swing. Eventually the irate tournament director ordered all parents out of the playing room. Soon more than a hundred fathers and mothers were pacing in the hall outside. The absence of desperate parents was a relief to the kids, no doubt, but being locked out heightened the already feverish anxiety of these poor people. Once in a while the tournament director would open the door a crack so the children could have some air. Instantly, scores of parents would scramble for a hand-in-your-face glimpse of their kid’s game. I was among them.

When Josh was a baby, I fantasized that he would grow up to be a star basketball player, with me cheering from the stands. Together we would stay in shape, jogging like Joe and his father in Ernest Hemingway’s story “My Old Man.” Instead my son is a chess player. Since he began playing in tournaments at the age of seven, he has frequently been the highest-rated player for his age in the United States. Our home has become cluttered with gaudy trophies, chess sets, chess clocks, score books, computers and chess literature in different languages. His precocious ability for this board game has seized control of my imagination. I used to worry about my career, my health, my marriage, my friends, my mother. Now I mostly worry about Joshua’s chess. I worry about his rating and whether he’s done his chess homework. There are tournaments to be concerned about. Has he practiced enough? Too much? In years past, while I sat at my desk struggling to write, I often daydreamed about the Knicks or about going fishing. Now in my mind I play over my son’s chess games; his sedentary activity has displaced many priorities in my life.

Josh is very athletic, and at chess tournaments he is eager to play ball between rounds. While I gather up his chess pieces and pencils, it’s my job to say, “No, Josh. You don’t want to knock yourself out. Why not go over your openings?” Usually at scholastic tournaments he is seated at the number-one board, and other little kids sometimes get sick to their stomachs because they have to play against my little kid. Their parents treat me deferentially, as if I had done something myself. It’s an odd position for a father to be caddy and coach for his three-and-a-half-foot, sitting, brooding son. 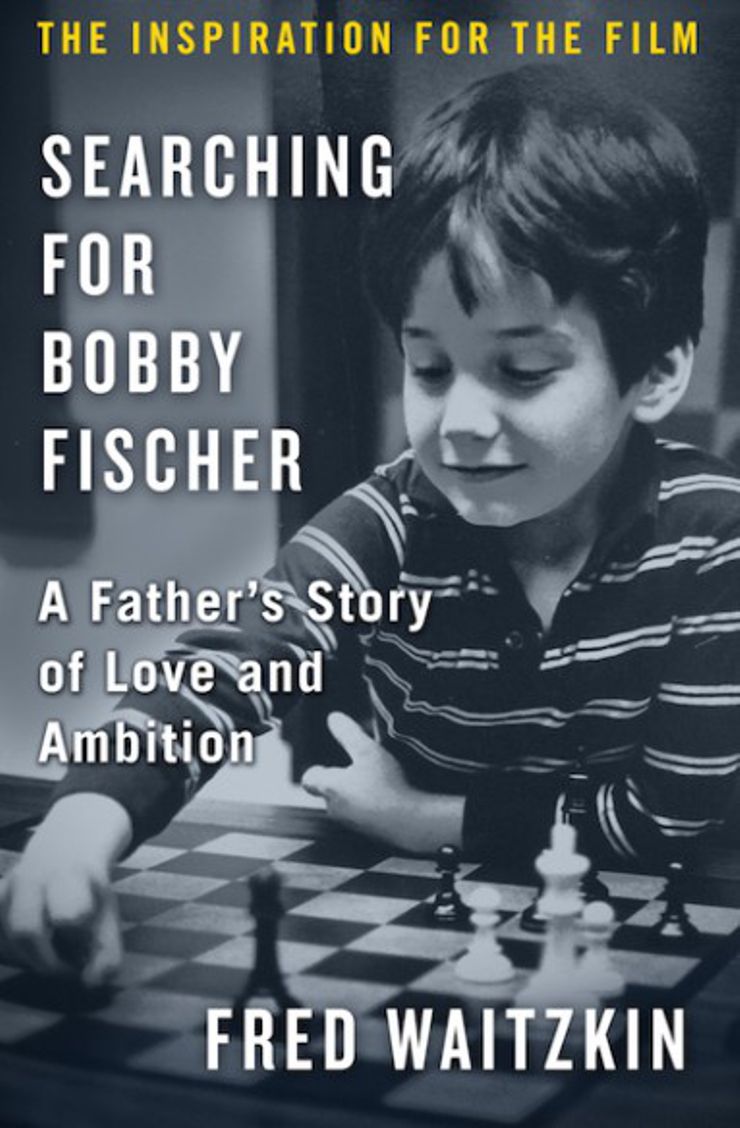 Josh and I played our first chess games on a squat coffee table in the living room when he was six years old. He sat on the floor, his face cupped in his hands, his eyes at the level of the wooden pieces as if he were peering into a dangerous but alluring forest. By trial and error, more than by my instruction, which he staunchly resisted, he found tricky ways to trap my pieces. He unearthed standard chess strategies and tactics that players have used for centuries. He was good at this new game.

So good that I kept forgetting how old he was. Often I became caught up in the intrigues of combat and found myself trying to take my son’s head off. I batted aside his little attacks like Rommel— I crushed him. Josh would come back shaking his fist at me and grimacing. “I must win, I must win,” he’d mutter to himself while setting up the pieces. It must have been profoundly confusing for him that I was able to defeat his best ideas. A couple of times I offered him the handicap of knight odds and he cried at my impudence, as if I’d tried to humiliate him. Already he seemed to know that his old man was a hack, what chess players call a patzer.

While I tried to slaughter Josh, I rooted for him to win. The game became a quicksand of passion for us. After an emotional loss, he would pretend not to care, but his lower lip would tremble. Dejected, he’d go off to his room and my heart would be broken. My carefully crafted victories felt like defeats. The next day he would refuse to play me again, not even for a new toy car— not even for candy. I would feel panicky. Maybe during my last blistering attack I’d killed off his baby dream of being the world champion. Or maybe it was my dream, not his. Such distinctions are ambiguous between a father and a little son. This is how fathers mess up their kids, I’d lecture myself. Would you throw a slider to a six-year-old just learning to hit? Or smack him in the belly with a hard spiral? Still, a few days later we’d be at it again. Once after I’d sprung a trap on his queen, Josh announced that he didn’t want to become a grandmaster; “it’s too hard,” he said. Feeling bad, I asked what he would do instead. He announced soberly that he would work in a pizza shop that had a Pac Man machine (he knew how much I hate video games).

In retrospect I suppose that Josh was just beginning to exercise his muscles as a chess psychologist, trying to soften me up, because the following afternoon he was squirming with pluck and purpose, knocking down pieces each time he reached his short arm across the board to take one of my pawns. That day I was feeling like Karpov, carefully building an insurmountable attack. The game took a long time, and while he was considering the position, I took a break for a shower. I was toweling off when Josh called me, beside himself with impatience. I grabbed a beer, checked the position and made my move. Josh smiled, slid his rook over and announced, “Mate in two.” “I doubt it,” I said smugly, but every move was a vise. He had me. I hugged him and we rolled on the floor laughing. It was the first time he’d ever beaten me.

A FEW MONTHS later, to find Josh stronger opponents we took him to the Marshall Chess Club on 10th Street, which was within walking distance of our apartment. In the Marshall, the worn Victorian furniture, the unpolished parquet floors, even the dust resonated with brilliant chess games from the past. But in the shadows of late afternoon the tangible presence of chess history made no impression on six-year-old Josh, who picked red gummy bears out of a plastic bag while he observed two chess masters playing speed chess, which is called blitz. While my wife and I chatted with the manager, our son giggled as the players moved the pieces at sleight-of-hand speed and took turns ferociously slamming the time clock after each move.

We were politely informed by the manager that there had never been a six-year-old member of the Marshall, and that it would make more sense to bring him back in six or seven years, after he had learned more about the game and was old enough to read chess books. By now Josh had sauntered to a far corner of the room where a young man with a sallow complexion sat in front of an inlaid oak-and-mahogany chess table and played from a book of Russian openings, silently moving the pieces for both black and white, a mime of chess. Josh didn’t know what to make of this; maybe the man was pretending, like playing with dragons and superheroes. After a moment, he asked exuberantly, “Wanna play?” and the young man looked up with a dazed expression.

A few minutes later my little boy was sitting on a telephone book so that he could see over his chess pieces, and as he plunked his men down he chewed gummy bears. Surprisingly, the game went on and on, into the second hour; by then half a dozen members of the club were clustered around the table watching. Down only a pawn, Josh moved almost instantly, parrying attacks, then fidgeting, looking out the window and making faces at his embarrassed and proud parents while waiting for his opponent to move. The young man played the game in a vacuum; he seemed to sift through history before making each decision and never glanced at his miniature opponent.

“Trick or treat,” Josh announced finally as he pushed a pawn forward. The young man was perplexed for a moment, then flushed as if he’d been slapped. One of the members couldn’t contain his excitement and whispered, “He’s won the rook!” The pawn had sprung a discovered attack. Josh’s bishop was checking the king, and when it moved away, he’d take the rook.

The young man ran his fingers through his hair, his expression anguished. After five minutes of considering he reached across the table and offered Josh his hand. My son was confused by this gesture; he had not yet learned about resigning.

Love reading? Sign up for the Early Bird Books newsletter and get daily ebook deals delivered straight to your inbox.