In Haven, the award-winning journalist recounts her incredible—and controversial—involvement in the rescue of thousands of Jews.

Ruth Gruber, the award-winning Jewish American journalist, photographer, humanitarian, and author of 19 books passed away in November 2016 at the age of 105.

“Ms. Gruber called herself a witness, and in an era of barbarities and war that left countless Jews displaced and stateless,” writes Robert D. McFadden in her New York Times obituary. “She often crossed the line from journalist to human rights advocate, reporting as well as shaping events that became the headlines and historical footnotes of the 20th century.”

Gruber is perhaps best known for helping one thousand European refugees find asylum in America during World War II. She chronicled her experience in her book Haven: The Dramatic Story of 1,000 World War II Refugees and How They Came to America. The excerpt below demonstrates the controversial nature of providing asylum for Jews in 1943, and how Gruber came to be involved in the rescue.

Read on for an excerpt of Gruber's memoir Haven. 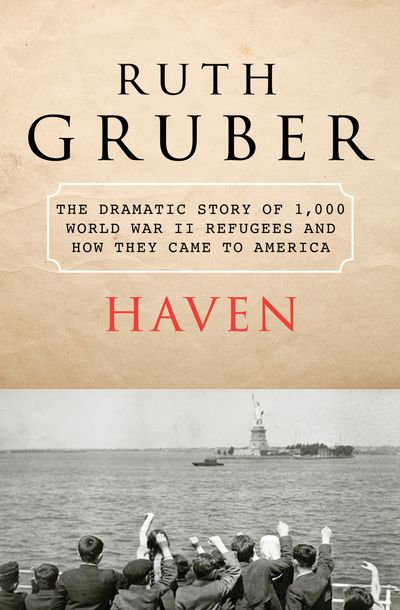 It was a blustery first day of March 1943 in New York. The streets around Madison Square Garden were clogged. The Garden held 21,000 people, but at least 75,000 more were outside, unable to enter.

We kept each other warm, no longer strangers. We belonged together, a wall of Americans—Jews and Christians—shouting with one voice, “Stop Hitler now!”

We listened to loudspeakers as our leaders pleaded with the Allied governments to act swiftly, before it was too late.

“The world can no longer believe that the ghastly facts are unknown and unconfirmed,” Dr. Chaim Weizmann, the eloquent leader of the Jewish Agency, the shadow Jewish government in Palestine, declared. “At this moment expressions of sympathy without accompanying attempts to launch acts of rescue become a hollow mockery in the ears of the dying.”

“The democracies have a clear duty before them.” Weizmann’s voice rang through the night air. “Let them negotiate with Germany through the neutral countries concerning the possible release of the Jews in the occupied countries.”

Negotiate with Germany through the neutral countries to release the Jews in the occupied countries? Sweden was neutral. Switzerland was neutral. In fact, Switzerland was far more. It was a giant ear, the listening post for diplomats, provocateurs, spies, mysterious travelers. It was in Switzerland that Riegner was getting much of his information from German travelers.

“Let havens be designated,” Weizmann went on, “in the vast territories of the United Nations, which would give sanctuary to those fleeing from imminent murder.”

Havens! The word became symbolic in my mind. America had been one great big haven since its birth. We could have hundreds of havens—if only we opened our doors.

Weizmann was pleading for a haven in Palestine. “The Jewish community of Palestine will welcome with joy and thanksgiving all delivered from Nazi hands.”

A man near me shouted, “Tell it to Churchill!”

But Britain, with a mandate from the world to turn Palestine into a homeland for Jews, was even now sending crucially needed warships to the Palestine coast, not to fight the Nazis but to prevent Jews from entering.

We heard Cardinal Hinsely, the Roman Catholic Archbishop of Westminster, denouncing both England’s Foreign Office and our State Department. “We need cold deeds and speedy deeds, not the rhetoric behind which governments are still hiding.”

The wind grew stronger. More people kept thronging the streets around us, pushing, shouting, shoving, while police sought to keep some semblance of order.

Want more inspiring memoirs? Sign up for the Early Bird Books newsletter, and get the best daily ebook deals delivered straight to your inbox.

Now at last the voice we were waiting for swept over us. The President was talking from Washington. I could see the patrician face, the strong jaw exuding optimism and strength. The night air grew warm again, embraced by his words.

“The Nazis will not succeed in exterminating their victims….”

He’s talking now about the Jews, I told myself, he’s going to tell us how he’ll save them.

“The American people will hold the perpetrators of these crimes to strict accountability in a day of reckoning which will surely come.”

Was that it? Were we to wait until the war ended? Why couldn’t he act now? Why not open havens in the empty valleys, the hilltops, and the deserts of America?

This was March 1943. Our soldiers were battling in North Africa. The Russians had driven the German Sixth Army back from Stalingrad, but Hitler still controlled most of Europe. I knew the argument; it was implicit in the President’s words: First we must win the war. Then we will take care of the refugees.

But how many, I thought in despair, would still be alive?

“We have adopted a resolution”—Rabbi Wise’s voice rolled through the loudspeakers like the music of an organ—“a resolution which we will forward to Secretary of State Cordell Hull to protest against the continuing failure to act against the strange indifference to the fate of five million human beings.”

I clutched my arms, shivering in anger and frustration. We were 75,000 people—and all we could do was send a protest to Cordell Hull.

No havens were suggested. The doors to America and Palestine remained tightly sealed.

As the clamor in the country to save refugees grew into a groundswell, the State Department called a conference in Bermuda specifically to discuss rescue. The conference opened on the day the Nazis launched their final attack on the Warsaw Ghetto. It was also the week of Passover.

The Bermuda conference was a fiasco. “Palliatives,” The New York Times described it, “designed to assuage the conscience of the reluctant rescuers rather than to aid the victims.”

Not one country offered to take in a single refugee.

Months passed. Hundreds of thousands of Jews were murdered, and still no havens were provided.

Then, late in 1943, the suppressed cables were discovered.

The World Jewish Congress in Switzerland had cabled Washington that they could ransom the lives of thousands of Jews in Romania and France. They could raise the money themselves; they knew the officials to be bribed; all they needed was the license to send dollars abroad.

Both Treasury and State had to approve the license. Treasury agreed to issue the license immediately. State did nothing. Half a year was lost.

Outraged, Secretary of the Treasury Morgenthau called in Josiah E. DuBois, Jr., a young assistant general counsel working with Treasury’s Foreign Funds Control. “I want you to investigate the whole thing. Get to the bottom of it.”

Want more inspiring memoirs? Sign up for the Early Bird Books newsletter, and get the best daily ebook deals delivered straight to your inbox.