Business Adventures: Inside the Stock Market Crash of 1962

It was a dark day for everyone on Wall Street—even for the brokers who had lived through "Black Tuesday" in 1929.

As coronavirus fears cause the stock market to experience record-breaking drops, it's helpful to remember that we've experienced these kinds of economic downturns before.

The following is an excerpt from Bill Gates’ favorite business book, Business Adventures, though it originally appeared as a 1963 essay in The New Yorker titled “The Fluctuation.”

The story reveals details about the players in the New York Stock Exchange during the market’s biggest single-day drop since 1929—and the pandemonium that ensued. 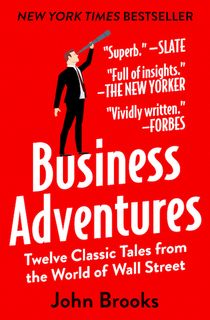 But was it over? This question occupied Wall Street and the national investing community all the afternoon and evening. During the afternoon, the laggard Exchange ticker slogged along, solemnly recording prices that had long since become obsolete. (It was an hour and nine minutes late at closing time, and did not finish printing the day’s transactions until 5:58.) Many brokers stayed on the Exchange floor until after five o’clock, straightening out the details of trades, and then went to their offices to work on their accounts. What the price tape had to tell, when it finally got around to telling it, was a uniformly sad tale. American Telephone had closed at 100⅝, down 11 for the day. Philip Morris had closed at 71½, down 8¼ Campbell Soup had closed at 81, down 10¾. I.B.M. had closed at 361, down 37½. And so it went. In brokerage offices, employees were kept busy—many of them for most of the night—at various special chores, of which by far the most urgent was sending out margin calls. A margin call is a demand for additional collateral from a customer who has borrowed money from his broker to buy stocks and whose stocks are now worth barely enough to cover the loan. If a customer is unwilling or unable to meet a margin call with more collateral, his broker will sell the margined stock as soon as possible; such sales may depress other stocks further, leading to more margin calls, leading to more stock sales, and so on down into the pit. This pit had proved bottomless in 1929, when there were no federal restrictions on stock-market credit. Since then, a floor had been put in it, but the fact remains that credit requirements in May of 1962 were such that a customer could expect a call when stocks he had bought on margin had dropped to between fifty and sixty per cent of their value at the time he bought them. And at the close of trading on May 28th nearly one stock in four had dropped as far as that from its 1961 high. The Exchange has since estimated that 91,700 margin calls were sent out, mainly by telegram, between May 25th and May 31st; it seems a safe assumption that the lion’s share of these went out in the afternoon, in the evening, or during the night of May 28th—and not just the early part of the night, either. More than one customer first learned of the crisis—or first became aware of its almost spooky intensity—on being awakened by the arrival of a margin call in the pre-dawn hours of Tuesday.

Want more business books? Sign up for the Early Bird Books newsletter, and get the best daily ebook deals delivered straight to your inbox.

If the danger to the market from the consequences of margin selling was much less in 1962 than it had been in 1929, the danger from another quarter—selling by mutual funds—was immeasurably greater. Indeed, many Wall Street professionals now say that at the height of the May excitement the mere thought of the mutual-fund situation was enough to make them shudder. As is well known to the millions of Americans who have bought shares in mutual funds over the past two decades or so, they provide a way for small investors to pool their resources under expert management; the small investor buys shares in a fund, and the fund uses the money to buy stocks and stands ready to redeem the investor’s shares at their current asset value whenever he chooses. In a serious stock-market decline, the reasoning went, small investors would want to get their money out of the stock market and would therefore ask for redemption of their shares; in order to raise the cash necessary to meet the redemption demands, the mutual funds would have to sell some of their stocks; these sales would lead to a further stock-market decline, causing more holders of fund shares to demand redemption—and so on down into a more up-to-date version of the bottomless pit. The investment community’s collective shudder at this possibility was intensified by the fact that the mutual funds’ power to magnify a market decline had never been seriously tested; practically nonexistent in 1929, the funds had built up the staggering total of twenty-three billion dollars in assets by the spring of 1962, and never in the interim had the market declined with anything like its present force. Clearly, if twenty-three billion dollars in assets, or any substantial fraction of that figure, were to be tossed onto the market now, it could generate a crash that would make 1929 seem like a stumble. A thoughtful broker named Charles J. Rolo, who was a book reviewer for the Atlantic until he joined Wall Street’s literary coterie in 1960, has recalled that the threat of a fund-induced downward spiral, combined with general ignorance as to whether or not one was already in progress, was “so terrifying that you didn’t even mention the subject.” As a man whose literary sensibilities had up to then survived the well-known crassness of economic life, Rolo was perhaps a good witness on other aspects of the downtown mood at dusk on May 28th. “There was an air of unreality,” he said later. “No one, as far as I knew, had the slightest idea where the bottom would be. The closing Dow-Jones average that day was down almost thirty-five points, to about five hundred and seventy-seven.

Related: 10 Books on Capitalism to Help You Understand the World

It’s now considered elegant in Wall Street to deny it, but many leading people were talking about a bottom of four hundred—which would, of course, have been a disaster. One heard the words ‘four hundred’ uttered again and again, although if you ask people now, they tend to tell you they said ‘five hundred.’ And along with the apprehensions there was a profound feeling of depression of a very personal sort among brokers. We knew that our customers—by no means all of them rich—had suffered large losses as a result of our actions. Say what you will, it’s extremely disagreeable to lose other people’s money. Remember that this happened at the end of about twelve years of generally rising stock prices. After more than a decade of more or less constant profits to yourself and your customers, you get to think you’re pretty good. You’re on top of it. You can make money, and that’s that. This break exposed a weakness. It subjected one to a certain loss of self-confidence, from which one was not likely to recover quickly.” The whole thing was enough, apparently, to make a broker wish that he were in a position to adhere to de la Vega’s cardinal rule: “Never give anyone the advice to buy or sell shares, because, where perspicacity is weakened, the most benevolent piece of advice can turn out badly.”

Want more business books? Sign up for the Early Bird Books newsletter, and get the best daily ebook deals delivered straight to your inbox.