Saunders is one of just two Americans who have nabbed the UK's top literary prize.

New York Times-bestselling author George Saunders is now a Man Booker Prize winner. Saunders, who has penned short story collections such as Tenth of December, took home the 2017 award for his novel Lincoln in the Bardo. The Man Booker is the most prestigious literary prize in the UK, and past recipients include Ian McEwan, Margaret Atwood, and Iris Murdoch. Last year, Paul Beatty became the Booker's first American recipient, with Saunders now following in his footsteps.

“For me, the nice thing is that the book is hard, and it’s kind of weird and it’s not a traditional novel,” said Saunders on Tuesday, in regards to his win and Bardo’s unconventionalism. “I didn’t do it just to be fancy, but because there was this emotional core I could feel, and that form was the only way I could get to it.”

Indeed, Lincoln in the Bardo, isn't your typical Man Booker material. With echoes of a ghost story, it opens in the early days of the American Civil War, when Abraham Lincoln mourns his late 11-year-old son, Willie, at a cemetery. Willie may be dead, but he’s far from alone—spirits are everywhere, lurking in a purgatory (or "bardo"), where they bemoan their own unfortunate ends. It’s through their (often hilarious) narration that the central story of Willie unfolds. Saunders combines real history with supernatural elements, tragedy, and his signature sense of humor.

Published in February 2017, Lincoln in the Bardo received critical acclaim abroad and in the U.S.—with authors like Zadie Smith hailing it as "a masterpiece." A big screen adaptation is forthcoming now that Megan Mullally (Will & Grace) and Nick Offerman (Parks and Recreation) have acquired the film rights. 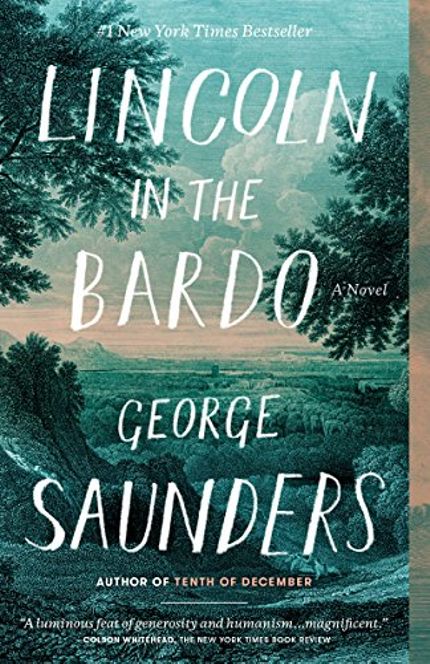 Want more award-winning books and authors? Sign up for the Early Bird Books newsletter and get the best daily ebook deals delivered straight to your inbox.