Before He Was Muhammad Ali: The Amateur Boxer Who Won Gold at the 1960 Olympics

The boxer won the Light Heavyweight gold medal at the 1960 Summer Olympics in Rome when he was just 18 years old.

Long ago, Muhammad Ali was just a teenage boy who went by his given name, Cassius Clay. Born on January 17, 1942, he grew up in the racially segregated South, where he encountered the man who first nudged him towards the sport that catapulted him to global fame. Infuriated by the loss of his bike, a 12-year-old Ali was rearing for revenge when police officer Joe E. Martin stepped onto the scene. At Ali's insistence that he'd "whup" the thief responsible, Martin offered him some practical advice: Learn boxing first.

Guided by trainers like Fred Stoner and Chuck Bodak, Ali then launched his boxing career, quickly transforming from a promising amateur into an unbeatable professional. In the mid-1960s, he dominated his opponents with his signature fighting style, earning a reputation as a trash-talker, a record-breaking heavyweight champion, and simply "The Greatest." But a controversial (and very public) refusal to fight in the Vietnam War put an end to this period of success. Sentenced to five years in prison—for which he ultimately served four years on bail—Ali was forced to take a break from boxing, and instead spent the latter half of the decade as a symbol of black pride and resistance for the Civil Rights Movement. It was a time of great change for both the country and for Ali: Upon returning to the ring in the 1970s, he found that the hiatus had significantly diminished his skills. He was no longer the fighter he once was.

Nevertheless, Ali came to be regarded as one of the best athletes of the 20th century. In Muhammad Ali: His Life and Times, he collaborates with biographer Thomas Hauser to tell his incredible story—from his athletic accomplishments to his activism and poetry to his devastating battle with Parkinson's Disease. The following excerpt highlights one of his earliest and most notable victories: the 1960 Summer Olympics Games, when he was still just an 18-year-old underdog called Cassius. It was there that Ali defeated three-time Polish boxing champion Zbigniew Pietrzykowski in an unexpected upset, securing the world's attention and a gold medal in the light heavyweight division.

The rest, as they say, was history.

Read on for an excerpt about his time at the 1960 Summer Olympics, and then download the book. 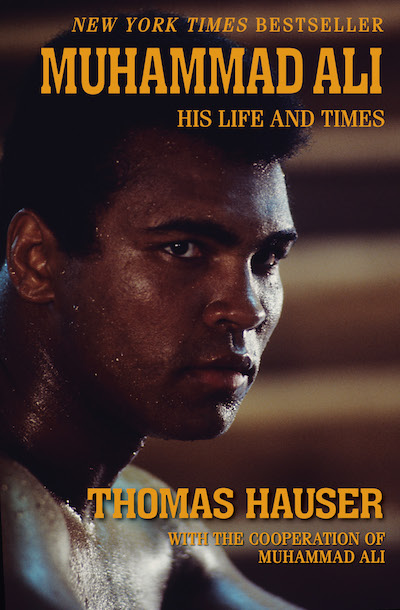 Devoting his energies almost exclusively to boxing, Cassius Clay fought 108 amateur bouts, winning six Kentucky Golden Gloves championships, two National Golden Gloves tournaments, and two National AAU titles by the time he was eighteen. Still, to the public at large, he was unknown. Then came the 1960 Rome Olympics—although after prevailing in the Olympic trials, Clay almost didn’t go to Rome.

JOE MARTIN: “He was afraid of flying. We had a rough flight going to California for the trials, and so when it came time to go to Rome, he said he wasn’t gonna fly, and that he wouldn’t go. I said, ‘Well, you’ll lose the opportunity of being a great fighter,’ and he said, ‘Well, I’m not gonna go.’ He wanted to take a boat or something. Anyway, I finally took him out to Central Park here in Louisville and we had a long talk for a couple or three hours, and I calmed him down and convinced him if he wanted to be heavyweight champion of the world, that he had to go to Rome and win the Olympics.”

So Cassius Marcellus Clay, Jr., went to Rome. Before the games, Sports Illustrated declared him “the best American prospect for a gold medal [in boxing],” adding, “Clay likes to display supreme confidence by doing intricate dance steps between passages of boxing.” Other observers were less impressed, but concurred with the view that Clay was “one of the best-known, best-liked athletes in the Olympic Village.” “You would have thought he was running for Mayor,” one teammate opined. “He went around introducing himself and learning other people’s names and swapping team lapel pins. If they’d had an election, he would have won in a walk.”

Related: Battle of the Sexes: The Real Story Behind the Billie Jean King vs. Bobby Riggs Tennis Match Up

Clay won his first three fights in the 178-pound division, scoring two unanimous decisions and a second-round knockout. Then, in the finals, he faced Zbigniew Pietrzykowski of Poland—a three-time European champion and bronze medalist from the 1956 Olympic Games. British journalist John Gottrell described the bout:

In the first round, it seemed that Clay would be badly mauled. He was confused by his opponent’s southpaw style, took some heavy punishment, and once showed his inexperience by closing his eyes in the face of a barrage of blows. Clay managed to keep out of trouble in the second round, and in the last minute he abandoned his show-off style with the fancy footwork and dropped hands, and stood his ground to throw four hard rights to the head. Even so, he was still behind on points at this crucial stage. “I knew,” he explained afterwards, “that I had to take the third round big to win.”

Clay did finish big. In that final round he suddenly found his top form, moving in and out with expert judgment, punching crisply and with perfect timing. This sharper, better coordinated Clay stormed back with a torrent of combination punching that left Pietrzykowski dazed. He no longer relied too much on his left jab, but made equal use of his right to penetrate the southpaw’s guard. Ripping into the stamina-lacking Pole, he drew blood and came preciously close to scoring a knock-out. At the final bell, Pietrzykowski was slumped helplessly against the ropes. There was no doubting the verdict. All the judges made Clay the points winner.

Clay’s roommate at the Rome Olympics was Wilbert “Skeeter” McClure, who won back-to-back National Golden Gloves and AAU championships, and gold medals at the 1959 Pan American and 1960 Olympic games. Now a psychotherapist and president of a Massachusetts consulting firm, McClure puts young Cassius Clay in perspective.

WILBERT “SKEETER” MCCLURE: “I first heard of Cassius Clay back in 1959 at the National Golden Gloves Tournament in Chicago. All the fighters were staying at the same hotel. I was in the lobby, and there was this kid there, and I heard him whispering to some other guys, ‘There goes Skeeter McClure.’ That’s because I had won the Nationals in ’58 and was coming back for more. Anyway, he and I both won the Nationals, and were part of a team that represented Chicago in an inter-city tournament against New York. We trained together, and I remember Cassius kept bugging everybody on the team, saying, ‘Man, there are all these pretty girls on the streets; all these pretty girls walking around; we got to meet some of these girls.’ And the rest of us weren’t interested in that. We were just there to fight. But he kept agitating and asking and saying, ‘Come on, let’s put on our jackets and go someplace to impress the girls.’ So finally the coaches set it up. It was all Cassius’s doing. They took us to Marshall High School, which was a huge school in Chicago. We had pretty girls as hostesses to show us around. Then we went into the cafeteria for lunch, which was filled with more pretty girls. There were pretty girls sitting everywhere. And the guy who’d been agitating just sat there, staring at the food on his tray the whole time. He didn’t say a word. I mean, he was so shy. We teased him about it for days afterward, and all he did was look at us and shrug his shoulders. He was very, very shy around girls.

“After that, maybe a month later, the National AAUs were held in my hometown of Toledo. He was there. Both of us won, and I invited him home to meet my parents and brother and sister. And we were together again for the Pan American trials at the University of Wisconsin, where he lost to Amos Johnson. Johnson was a grown man, a Marine, and a southpaw. I think that was the last fight Ali lost until Joe Frazier beat him twelve years later. And what I remember most about that time was, my dad had driven over from Toledo and a bunch of us went out for dinner afterward. We were in this restaurant, and Cassius was philosophical. All he said was, ‘I just couldn’t figure him out.’ And if you think about it, when you’re seventeen years old and you meet a man who’s twenty-five or twenty-six, in the service, who fights left-handed, that’s a big disadvantage. But he didn’t grumble or moan or complain. He just said like a champion, ‘I couldn’t figure him out.’

“Then we made the Olympic team together. And in those days, being an Olympian was purely amateur; not like it is now. An amateur was an amateur. In fact, I almost didn’t go to the Olympics because I had one more semester to finish at the University of Toledo. I was paying my own way through college, and I didn’t think I’d be able to afford to go to the games and go to school at the same time, until finally the university gave me a scholarship for the last semester so I could afford to go to Rome. That wouldn’t happen today. Now the money is there to get the talented fighters to where they have to go. A gold medal is seen as a marketing tool. But back then, we weren’t fighting to form the cornerstone of a professional career. We were fighting for pride.

“On the plane going to Rome, I remember, we were trying to decide who would win gold medals, and Cassius led the conversation. He was voluble even then. As I recall, he was afraid of flying, and he talked about that too. But once we got airborne he managed to distract his fears by talking a lot. He said, ‘Now, I’m gonna win a gold, and Skeeter’s gonna win a gold.’ And there was a welterweight who got killed after we came back, Harry Campbell. He said, ‘Campbell’s gonna win a gold.’ And there were two others he predicted, too. We talked about our personalities and boxing styles and how we were nice clean-cut wholesome kids, and we thought that would appeal to the judges.

“In Rome, he was outgoing but he was seriously into boxing. I don’t know of anybody on any team who took it more seriously than he did. We’d walk around and he’d go up to people and shake hands with them, but he had his mind on training. He worked for that gold medal. He trained very, very hard. We all did. You don’t slough off and play games when you’re trying to become an Olympic champion. And certainly, when I watched him train, he was one of the hardest trainers I’d ever seen.

Featured image of Ali at the 1996 Olympics: Wikipedia