Get to know Vincent Price's softer side in his memoir of his beloved dog, The Book of Joe.

If you’re a horror fan, you know Vincent Price’s name from a number of cinema classics, including House on Haunted Hill, The Fly, and House of Wax. But you may not know about his softer side. From cats to goldfish, Price loved all animals—but especially Joe, his beloved 14-year-old mutt.

The Book of Joe: About a Dog and His Man is the classic, heartwarming memoir of life with a four-legged troublemaker. Joe belly flops into the garden fishpond, steals guests’ shoes, and even ends up in court, where his owner has to defend him. But despite his mischief, Joe is also a loyal friend and companion, staying with Vincent’s cousin in his battle with cancer and providing comfort in difficult times.

Read about Vincent and Joe’s bond with an excerpt of The Book of Joe below. Then download the book on Amazon, Barnes & Noble, and iTunes.

The Vincent Price Family Legacy will donate a portion of the proceeds to the Fund for Animals. 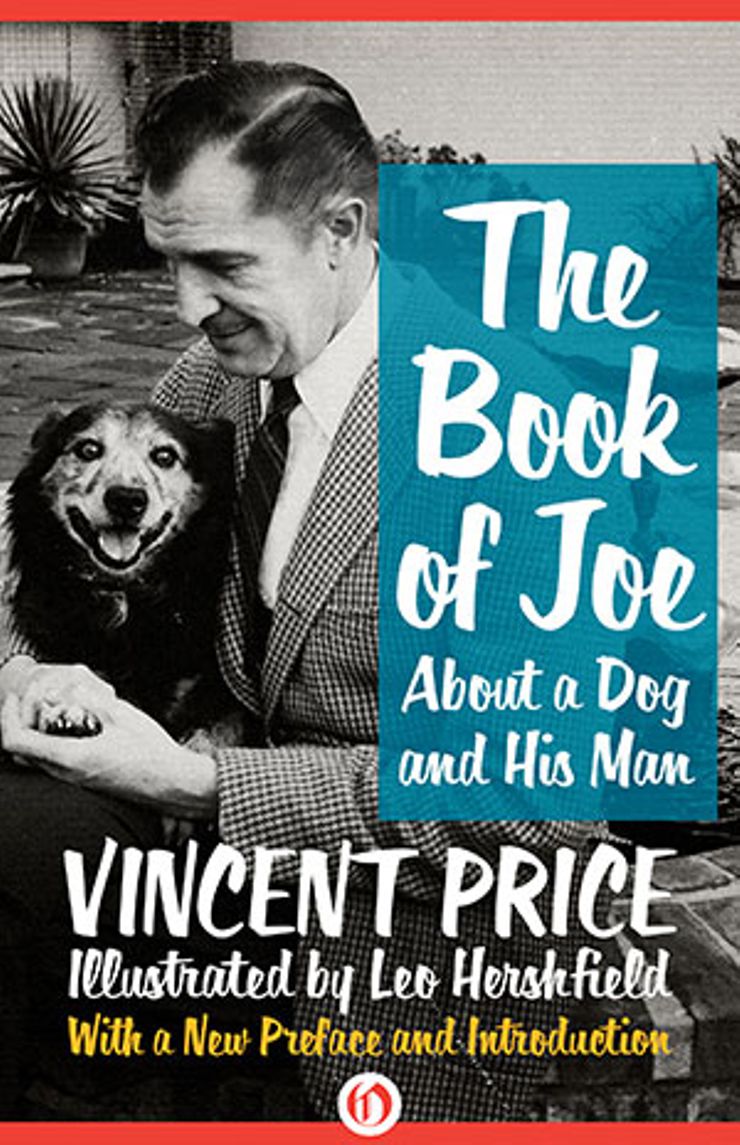 Now there I was, confronted with one of man’s most terrible decisions: the selection of a pet. Being momentarily alone in the world, I was spared that terrible indecision that happens between man and wife in these affairs. And since I had had the wit not to plan for my boy to be in on it, I didn’t have to look forward to the adorably disturbing statement from him that all the puppies were cute, so why not take them all home with us?

I guess that puppies know when someone who has a great desire to adopt one of them for life is near. At least all of these seemed to sense my desire to own one of them, for they put on the greatest show of salesmanship I’ve ever seen. Each one played an individual role, and they all displayed their bags of tricks by whining, barking, scratching the wire of the cages, lying on their backs, pink bellies up, or hiding their unpedigreed, captivatingly winsome little faces between their dappled paws. But I was not about to be had by any of this nonsense. Anyone who was going to be my best friend for the span of his lifetime had to be more than cute and less than demanding. He had to have the essential dignity of a mutt, with just enough charm and not too much temperament.

All these profound requirements went through my mind, even though I knew that I hadn’t a chance of achieving any of them if one of these little beasts took it into its head really to win me.

It must have been my very real need for the right pet that finally made me look deeper into one of the cages of attention-seeking-and-getting mongrels, for back there, looking like a miniature Trafalgar Square lion, lay Joe. I knew instantly that this was my dog and that his name was Joe, and something in his look at me said: “Master, Friend, Pal … Hello! I’m Joe.”

He didn’t give me the full thrust of his charm … just a steady thrash of his tail. It was a tail in full plume, exactly the color of a tortoise-shell cat. In fact, all of Joe was covered with silky, orangish-brownish-blackish fur, except for his paws and chest, which were lily-of-the-valley white.

This, then, was Joe. Dog of dogs. Short-legged, slightly bowed in the front and splay-foot behind, curl-tailed, with ears like a flying fox and a face that, if there are dog angels (and I’m sure there are), was an angel dog’s face. His expression was just sad enough to convey his pity for mankind and wise enough to make you wonder if he wasn’t right to pity us.

When I told the salesman that it was Joe I wanted, he told me, semi-disgustedly, that he had been marked down from five dollars to three fifty. I never knew that they had bargains on angels, but when they do, you’d best take the advantage. While he was making change from the five-dollar bill I gave him (Joe’s original price), he told me the virtues of the other pups in the same cage, all of whom were Joe’s brothers and sisters. They were so much cuter, according to him, more lively, better marked—he didn’t dare say better bred—and, according to him, I was making the greatest mistake of my life.

Apparently, Joe was the mistake, and I was making him mine!

I told him that it was a mistake I was willing to pay for now, and, I hoped, for many years to come. If our conversation had continued, it might have risen to great philosophic heights. But it ended with the return of the dollar fifty I had saved on Joe and the handing over of Joe himself.

The rest of his family bid him a noisy farewell when Joe was fetched from the rear of the cage, where he sedately remained. He merely yawned a wide-mouthed, curl-tongued yawn and waited for all the nonsense to be over. Joe knew, and I knew, the secret of the ages … that a man and his dog don’t need to be sold to each other, and that no one and nothing can unsell them once the bargain is struck.

The salesman must have had some secret confidence in my choice, for, instead of offering me a cardboard box or trying to sell me a carrying cage, he tied a piece of clothes-line around Joe’s neck and gave me the other end. And after Joe had shaken himself free of the dust of the cage and his boisterous family, we marched out of the shop and into the world of man and dog.

Dignity is innate. Man or dog, you either have it or you don’t. Joe had it. We walked down the street to the car, he at a discreet distance ahead to make the way safe for me. Then suddenly he stopped to do what little dogs do when they have to, and, as though in apology for not being old enough to know how he should do it, he gave me an over-shoulder look that assured me it wouldn’t be long till things were dog-shape. Then, standing once more, he shook himself from nose to tail tip so violently he fell over on his back. Once upright again, another look told me not to worry … that he was still little and that dogs mature quicker than men do and, though this might happen several more times, he’d get his land legs and, from then on, he’d keep his feet firmly on the ground and his eyes on me.