The Long Flight Home chronicles the little-known wartime effort of carrier pigeons and their handlers.

We’ve all heard a tale or two about men fighting on the frontlines during World War II, risking their lives for the greater good. But combat wasn’t the only form of resistance against the Nazis’ destructive warpath. Both men and women devised ways to support the Allies from the home front. The Long Flight Home by Alan Hlad hones in on one of these little-known, yet vital aspects of the effort to end the war: carrier pigeons. These seemingly innocuous creatures could be trained to travel vast distances and deliver encrypted messages between Allied forces. Long before we took near-instant communication for granted, the ability to pass along information with such an innovative approach could mean the difference between life and death.

The Long Flight Home draws on the historical importance of carrier pigeons to craft a masterful novel about strength and hope in the midst of wartime crisis. The story focuses on Susan Shepherd, a young British woman who was orphaned as a child. Susan was raised by her grandfather Bertie, who taught her the art of raising homing pigeons. As the war gets closer, threatening everything she’s ever known, Susan becomes involved in a covert mission to air-drop hundreds of homing pigeons in German-occupied France. While working on the mission, Susan grows close to Ollie, a young pilot who recently enlisted in the Royal Air Force. But before their connection can bloom into romance, Ollie takes to the skies. When Ollie’s plane is bombed and the mission goes awry, the duo relies on Duchess, Susan’s most beloved pigeon, to exchange messages from miles away.

Read on for an excerpt of The Long Flight Home, then download the book. 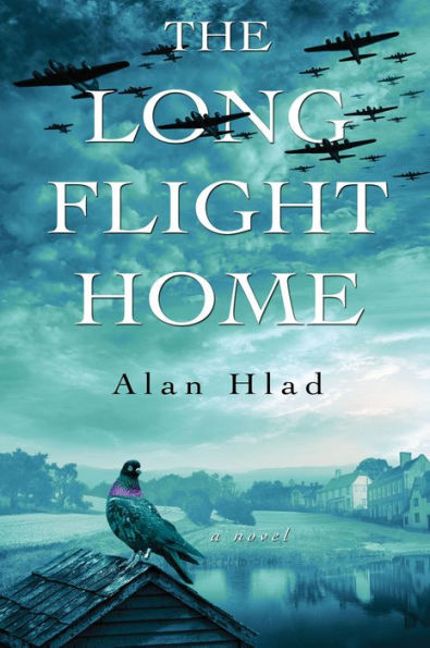 Susan stared out the train window in disbelief. The London she’d grown up with was nothing like this marred metropolis. The radio reports and newspapers had done little to prepare her for seeing this scorched, hellish ruin. Her breathing turned shallow, her chest filled with a fusion of shock and outrage.

Parades of Londoners who had spent the night in underground shelters were returning to their homes, or what was left of them. Susan saw two children sitting on the steps of a row house in ruins, the oldest girl consoling her baby brother by rocking him on her lap. Susan noticed the absence of parents and wiped tears from her eyes.

The train stopped several blocks before reaching their station due to a bomb that had taken out the tracks, leaving a crater the size of a bus. They stepped off the train to the wail of ambulance, police, and fire sirens. The scent of burnt wood and petrol made Susan want to hold her breath. A library across the street had been converted to a makeshift hospital; stretchers of wounded were being hauled inside by medics. Susan covered her mouth.

“There’s nothing you can do,” the lieutenant said, nudging her. “We need to go.”

They walked for blocks, passing more destruction and a park where antiaircraft artillery guns were placed between a swing set and a playground merry-go-round. Once a sanctuary for playful children, the park was now a military zone, with hardened men stacking sandbags.

Sections of central London were unrecognizable. Centuries of architecture decimated. Thousands of Londoners dead. Susan’s legs felt weak. She wanted to cry but continued walking through Westminster until Flight Lieutenant Boar stopped in front of the Treasury Building.

The lieutenant lowered his voice. “The Royal Air Force commands are moving out of London. Even British intelligence is rumored to be leaving the city. But Churchill’s stubborn. He declared that he would direct the war from the bowels of this building.”

“Perhaps he doesn’t want to abandon our people,” Susan said.

The lieutenant handed paperwork and identification to an army private, one of four armed men securing the entrance. The soldier unlocked an iron gate and led them down a set of steep stairs to a large underground complex, a concrete fortress composed of cabinet, communications, and sleeping rooms. They walked past a series of war rooms with uniformed men hovering over maps. Ringing phones and tapping typewriters filled the air. They were taken to a large room with a square conference table seating forty men. As they approached the few remaining seats, a military officer looked at Susan and said, “Could you bring me tea?”

Susan clasped her hands to keep them from shaking and said, “I’m with the National Pigeon Service.”

“Pardon me,” the officer said.

They took their seats. Susan scanned those in the room, a mixture of military officers, British intelligence, and members of the National Pigeon Service. The British intelligence, likely from the Government Code and Cypher School, wore suits and ties and clung together at the far corner of the table. The National Pigeon Service was a civilian organization, and even though Susan didn’t recognize anyone she knew, she could spot the members by their gray hair and woolly farm attire. Susan noticed she was the only woman in the room. Be an egg, she thought.

A decorated military man stood at the head of the table. “I’m Air Commodore John Breen.”

The commodore wrote “Source Columba” on a chalkboard in large letters. “This is the code name for our mission.”

Susan noticed men glancing at one another. But she knew from her studies at the university that Columba was the Latin word for pigeon.

Susan saw jaws drop as members of the National Pigeon Service took in this information.

“The first objective of our meeting is a commitment from each farm on the number of birds and delivery dates.” The commodore wrote again on the board. Farm . . . No. of Birds . . . Date. “Once this is accomplished, members of the National Pigeon Service will be dismissed.”

Packets were distributed. Susan selected her envelope, which was addressed to Bertie Shepherd. Inside was nothing more than a sharpened pencil and a sheet of paper on which to chart the number of pigeons and target delivery dates. Susan placed the paper facedown on the table.

The commodore quickly began obtaining commitments from pigeon raisers as though he was pressed for time or frustrated to have drawn the short straw to coordinate a mission involving pigeons. Regardless, it was obvious to Susan that the commodore was eager to get this meeting over with and move on to more important endeavors, such as the air battle over the Channel. And one by one, the old men did what the commodore requested, as if they had been conditioned by years of climbing out of muddy trenches by whistle-blowing officers.

Susan’s mind raced. What was the military going to do with all our pigeons? Where were they going? Who was going to care for them? She raised her hand.

“Miss Shepherd. I’m here on behalf of my grandfather, Bertie Shepherd. He was unable to come because—”

“You have a question, Miss Shepherd?” the commodore interrupted.

Susan swallowed. “May I ask what you are going to do with our pigeons?”

“It’s confidential. Only a few are aware of the plans to limit potential compromise of our intelligence.” The commodore turned to another pigeon raiser and requested his quota.

Susan looked around the room. The eyes of pigeon raisers were upon her. She sensed that they were all thinking the same thing but didn’t have the courage to open their mouths. Susan’s face began to sweat. Her palms turned sticky. Her heart pounded. And she forced herself to stand.

“Do you have trained pigeon handlers included in the mission?”

“Do you plan to use our pigeons for one-way or two-way communication?”

The commodore raised his voice. “Sit down, or I’ll have you removed.”

“Did you know that the vast majority of the pigeons from our farms are one-way pigeons?” Susan asked.

The commodore shouted for a military private, who was stationed outside the door.

The soldier entered and saluted.

“Remove her,” said the commodore.

The soldier stepped toward Susan.

Susan gripped the table. “Do you realize that most of the pigeons you take will only end up back at our lofts? We may not need to know when and where you plan to use our pigeons, but we need to know how they will be used if you expect Source Columba to be a success!”

A staunch man wearing a spotted bow tie stopped as he passed the door.

“Has the enemy invaded my war rooms?” Churchill asked with a cigar chomped between his teeth.

“Everything is under control,” the commodore said.

“She’s right.” A thin, elderly man stood. “Name’s Jonathan Wallace, National Pigeon Service. Most of the pigeons will end up back at our lofts. My apologies to everyone for not speaking.”

Churchill looked at Susan. “May I ask who you are?”

Susan swallowed, noticing that the prime minister looked like a bulldog wearing a suit. “I’m Susan Shepherd. I raise pigeons with my grandfather, and I’m studying zoology. Or at least I was until the war.”

Churchill leaned in. “What do you think you’re doing by challenging a senior military officer?”

Jowl muscles contracted. Ash fell from his cigar. Churchill looked at the commodore and said, “I recommend we take time to listen to Mr. Wallace and members of the National Pigeon Service. Their insight may be extraordinarily valuable in the success of our mission. It’s our intellect, spirit, and tough British fiber that will lead us to victory.” He tipped his hat and left.

Everyone took their seats. The commodore gripped his chalk, flushness spreading over his face.

“Bloody hell, Susan,” the lieutenant whispered. “I can’t believe you did that.”

“Nor I,” Susan said, feeling as if she had come within inches of being struck by a speeding train.

The meeting lasted deep into the afternoon. Not only did Susan learn about how the pigeons were to be used, she learned everything about Source Columba and wished she had kept her mouth shut.

In this passage, Susan was escorted to a high-level military meeting introducing the covert mission to use carrier pigeons as part of Britain’s war strategy. Though she was the only woman in the room, she gathered the courage to speak up and suggest that the military consult her expertise in order to use the homing pigeons to their full potential. One phrase running through Susan’s mind proved particularly helpful—“Be an egg.” Referencing one’s ability to be soft with fear on the inside, but hard on the outside, these words of affirmation were taught to Susan by her grandfather. An uplifting tale about one woman’s awe-inspiring role in World War II, The Long Flight Home promises to be an engrossing read.