Get an exclusive deleted scene from The Winemaker’s Wife.

The champagne vineyards of France conjure up images of celebration and luxury, but for the owners of a champagne house in 1940, the region was anything but idyllic. The Winemaker’s Wife by Kristin Harmel centers on Inès, a newlywed who thought her new life with Michel, the owner of famed champagne house Maison Chauveau, would be full of sunny days and wine-soaked nights. But as the Nazis extend their reign to France, horror descends even on the vineyards.

Inès finds herself growing apart from Michel, who begins to neglect their marriage in order to stockpile ammunitions for the French resistance movement. But her sorrow is nothing compared to the imminent danger that Celine faces. The half-Jewish wife of one of Michel’s employees, Celine senses the brewing unrest that could be her undoing. As whirlwind affairs collide and political tension threatens to boil over, these women and the ones they love will tug at your heartstrings.

The actions taken by these characters will cause powerful reverberations that are felt even in the present day. In 2019 New York, Liv Kent is struggling to pick up the pieces after a devastating divorce. When her elderly, eccentric grandmother Edith arrives on her doorstep, Liv is cajoled into accompanying her on a sporadic trip to France. There, she’ll learn the intimate details of a poignant story her grandmother has been waiting to pass on to the next generation.

At once a sweeping historical saga and a heart-wrenching love story, The Winemaker’s Wife is an engrossing new novel. Read on for an exclusive look at one of the book’s deleted scenes, then pre-order the book. 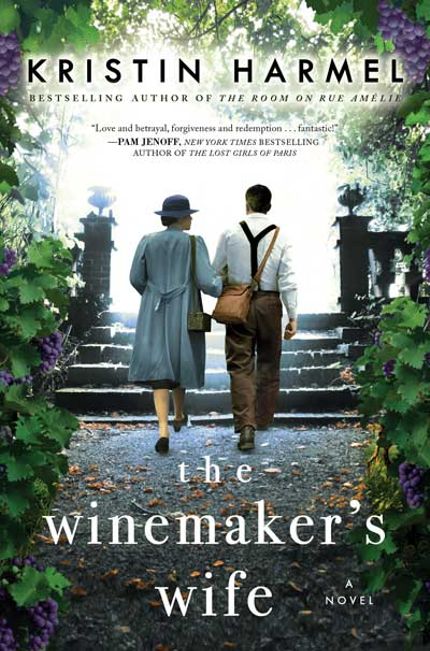 Six days after Inès had fled Reims in the middle of the night, Michel and Theo left early in the afternoon to check on some vines in nearby Sacy. Céline retreated to her own house to mend some clothing while Inès made her way to the kitchen to prepare a rare, hearty soup for that night’s dinner. Michel had managed to procure a few potatoes and an extra chicken from a farmer friend in exchange for a few bottles of champagne. A few hours later, she was in the midst of pulling the final feathers from the bird when there was a pounding on the front door.

Inès froze. Visitors hadn’t exactly been commonplace before the war, but after the Occupation, they’d become nearly nonexistent. It was also too late in the day—and in the year—for it to be an unsolicited drop-in from a hopeful vigneron wishing to discuss selling his grapes to the Maison Chauveau. A knot twisting in her stomach, Inès quickly washed her hands and headed for the door.

She immediately recognized the imposing man on the step as Richter, the German officer who had come in July to threaten Céline. “Bonsoir,” she murmured carefully, trying to keep the tremor out of her voice.

“Guten Abend, Madame Chauveau.” He returned her greeting in German, his dark eyes scraping over her from top to bottom. “Your husband is at home?”

She considered lying, but only for an instant, for how would she explain it when she couldn’t fetch him? “He will be returning very soon.”

“Ah.” Without invitation, Richter removed his cap and walked over the threshold, filling the front hall with his musky, ale-spiked odor. “So we are alone.”

“As I said, he will be back any moment now.”

“Well, it’s probably better that we talk without him.” His smile was icy. “I understand we have a mutual friend.”

“Oh, do you not know an Antoine Picard?”

The German looked amused. “How strange. It seems I have been misinformed.”

Inès didn’t say anything, but she knew that her flaming cheeks were likely all the answer he needed.

“Well, I have not come to discuss—how do you say it in French?— les liaisons.” He smirked at her. “I have come with a warning. Just a friendly one, of course.”

He seemed to be waiting for a response, so Inès forced herself to murmur, “Of course.”

“The warning is actually for Madame Laurent, but I thought it best to check with your husband before calling on her, since this is, after all, his property. She is at home?”

“No.” Inès spoke before she could think.

“But yet there is light in her cottage. I saw it very clearly before you answered the door.”

“She-she sometimes leaves a lantern on when she goes out.”

“Does she? How curious.”

“You see, it gets quite dark here at night so far from the city.” Inès knew she was babbling, but she couldn’t stop. “And when there’s the possibility she and Monsieur Laurent might not return before dusk…”

Richter went suddenly still. “Are you saying they are often out after dark?”

“What? No. Of course not.” Inès hastily backtracked. “Just that Madame Laurent prefers to keep a light burning to be, er, cautious.”

“How judicious. Well, then, I trust you will pass along a message since she’s not home.”

“Just tell her that Hauptmann Richter called on her. There’s been another roundup, and I thought she should be aware.”

“You came all this way to warn her?”

“Or a threat?” She knew she’d gone too far the moment the words were out of her mouth.

His eyes narrowed slowly. “You should not worry about such things, Madame Chauveau. Not when you have affaires of your own to attend to.”

And with that he was gone. Inès watched from the window as he climbed into his black car, started the engine, and rolled down the drive, pausing for a long while outside Céline’s and Theo’s cottage before accelerating and speeding away. She waited a full five minutes before hurrying out and pounding on the cottage’s front door.

“Was that Richter?” Céline asked, swinging the door open immediately and pulling Inès inside.

Céline blanched. “Good God. He was here to arrest me?”

“No. I don’t think so. I think he just wanted to scare you, like last time.”

“Why is he so interested in me?” Céline whispered as some of the color returned to her face.

Inès didn’t say anything. They had both seen the way Richter leered at her. “It will be all right,” Inès finally said, though she knew how empty the promise was.

This deleted scene from The Winemaker’s Wife depicts the sinister confrontation between Inès and an SS officer. Though Richter’s threats are veiled by a false politeness, Inès knows that he’s biding his time before arresting Celine and sending her off to an unspeakable fate. All the while, Richter hints that he knows the details of Inès’s own indiscretions. How will the women fare as the Nazis increase the pressure on France? To find out what happens next, pre-order The Winemaker’s Wife today.

This post is sponsored by Simon & Schuster. Thank you for supporting our partners, who make it possible for Early Bird Books to continue publishing the book stories you love.