The revised documentary tells the story of the artist's famous Silver Factory.

One of the most famous pop artists to come out of the 1960s, Andy Warhol inspired multiple exhibitions, books, and documentary films. Andy Warhol's Factory People, a documentary made by Emmy Award–winning Catherine O’Sullivan Shorr, delves into his famed Silver Factory, and all the people who made it such an iconic locale.

The documentary begins in 1964, with the founding of the Silver Factory in an abandoned hat factory on East 47th Street in New York City. In 1968, Warhol gave up the building lease and moved to the White Factory in Union Square. Soon after, he was shot by Valerie Solanas, an event that bookends the period of time covered in Factory People.

Unlike many other artist biographies and documentaries, Factory People focuses on the people and culture that surrounded Warhol, more than the artist himself.

Featuring interviews with everyone from Warhol muse Brigid Berlin to Poet and original Warhol Silver Factory assistant, Gerard Malanga, the 83-minute documentary strives to tell the real story of the time and the people who surrounded Andy.

On May 11th, the documentary will be available to watch for free via Kanopy, a streaming service available through participating libraries, colleges and universities. To find out if your library has Kanopy, click here.

Shorr also authored a three-part companion to her documentary, of which the first volume is Welcome to the Silver Factory. 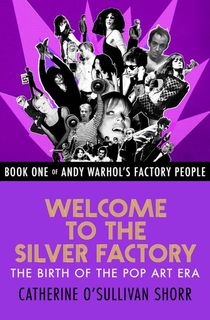