Gloria Steinem on Octavia Butler’s Parable of the Sower

Published in 1993, Octavia Butler's Parable of the Sower is set in the 2020s, and imagines a society that is falling apart due to climate change, corporate greed and economic inequality. (While this is disturbingly close to the world we live in today, we haven't added her premise to the list of things from dystopian novels that have come true just yet.)

Below, Gloria Steinem reflects on what makes Butler's novel so compelling, aside from its parallels to our current society. Feminism, racial inequality, and the struggles of empathy all contribute to making Butler's science fiction classic a book that transcends genre.

If there is one thing scarier than a dystopian novel about the future, it’s one written in the past that has already begun to come true. This is what makes Parable of the Sower even more impressive than it was when first published.

Twenty-five years ago, the great Octavia Butler wrote this first volume of what was to be a trilogy. She died at the tragically early age of 58, but we are lucky to have this novel and its sequel, Parable of the Talents. Its title refers to the Biblical verse that describes not the seed, but the differing grounds it falls on; a challenge to readers who will be the ground for seeds of warning.

Its story begins in a future California that has become divided into three overlapping worlds: the powerful who own and control water, electricity and the growth of food; the struggling middle population of those who live in walled communities, protect themselves with guns, and do their best to hang onto an order of the past; and the homeless, illiterate, dying, and prostituted of the city streets and countryside who rob the living and scavenge among unburied corpses that lie where ever they fell.

In all these worlds, water costs more than gasoline, police and firefighters serve only those who can pay, literacy is rare enough to be a marketable skill, designer drugs compel an obsession with fire, and no one is safe from robbery or rape or burning despite arms, walls, locked gates and layers of protection.

It is in this middle population in walled communities, struggling to preserve a past order, that we meet a teenager named Lauren. She is our narrator. She is smart and subject to hope and fear, friends and betrayals. She is also afflicted with hyperempathy syndrome, something she inherited from her drug-addicted mother. It causes her to feel the pain of any living being around her, including animals, yet the pain may be so great that it immobilizes her and she cannot help the one who is suffering.

Hyperempathy can become so painful that she helps the sufferer to die; Butler is no romantic about the cost of empathy. In Lauren’s own complicated life, we see her first with her family, then, as she loses them and begins to walk north through lawless territory, with a lover and disparate friends, Lauren becomes a leader who not only keeps the group together, but refuses to abandon them in order to be safer herself.

Lauren is also a poet who imagines the future. In a book called Earthseed: The Book of the Living, she tells us what was to be the theme of Butler’s book: “The destiny of the human race is to migrate to other planets and star systems.”

Want more SF/F classics? Sign up for the Early Bird Books newsletter, and get the best daily ebook deals delivered straight to your inbox.

This does not mean I’m giving away the story. Events will hook you anyway by their immediacy, intimacy, and odd resonance with what we are already experiencing. In fact, you may find yourself carrying the plot forward in your mind long after you put the book down. For Butler, the future depends not only on a mega-force like global warming—which is depicted here in gradual and frightening reality of long droughts and then floods—but also on human behavior. She makes very clear that human behavior caused global warming, not the other way around; at least, not until it was almost too late. Unlike many in science fiction, but like such feminist science fiction writers as Joanna Russ, Ursula LeGuin, and Marge Piercy, Butler doesn’t just create a future based on new science and new technology, she also shows the results of old human behavior that guides them.

In a science fiction world that was, in her lifetime, mostly by and for white male writers and readers, Octavia Butler has always been considered an oddity. She herself felt uniquely well-suited. As she explained: “I’m black, I’m solitary, I’ve always been an outsider.”  Her characters are young and old, Latina, African American, and more, all in the most natural and uniquely American of ways.

When young Lauren starts walking cross-country to save her future life, for instance, there is an echo of enslaved Africans walking north to save their lives in the past. In defining God, her characters come up with the idea that God is Change, the Truth of Life.

But as she often pointed out, what she wrote was neither science nor fiction, because “All struggles are essentially power struggles. Who will rule? Who will lead?  Who will define, refine, confine, design?”

Octavia Butler was playing out our very real possibilities as humans. I think she can help each of us to do the same.

Parable of the Talents 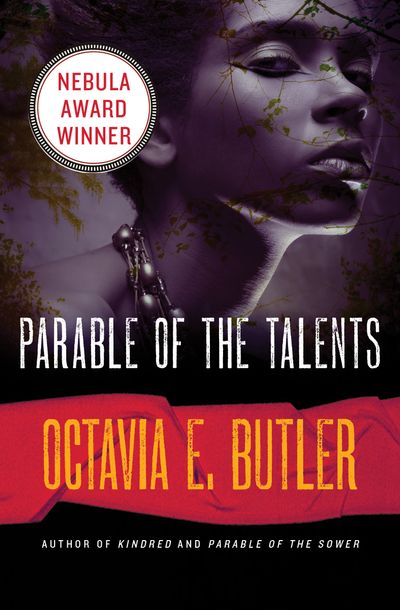