Steinbeck showed that migrant farmworkers were "citizens of the highest type."

“The new migrants...,” John Steinbeck wrote on assignment for the San Francisco News, “are here to stay...They can be citizens of the highest type, or they can be an army driven by suffering and hatred to take what they need.” Steinbeck continues: “On their future treatment will depend which course they will be forced to take.” The year was 1936 and Steinbeck was on commission to write what would become known as The Harvest Gypsies, a series of articles about California’s desperate migrant farmworker situation during the height of the Great Depression.

Related: 10 Books by Iconic Authors That You Might Have Missed

Life and times were bleak in 1936. With each article Steinbeck’s clarity on this fact grew more sharply defined. The migrant farmworker was “that shifting group of nomadic, poverty-stricken harvesters driving by hunger and the threat of hunger from camp to camp, from harvest to harvest.” The camps were one of squalid destitution: cardboard shacks near irrigation ditches, or worse. 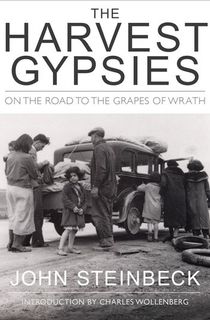 The families living in the camps were blearied and beaten down. The spectre of death sat with them at every meager meal. The farm owners and government were turning blind eyes to the exploited. The greed and cruelty was pervasive. Racism was as bright as the California sun. Steinbeck witnessed one man crafting a toilet one day for his family using what he could find. “HIs spirit and decency,” Steinbeck wrote, “and his sense of his own dignity have not yet been quite wiped out.”

Nearly 100 years later, what would Steinbeck write of the migrant farmworker today in the harshness of wildfires and COVID? He could very well have written the same articles. Little has changed. Farmworkers are not subject to the National Labor Relations law that grew out of the New Deal legislation of the 1930s. There are few, if any, protections for the roughly 700,000 farmworkers in California, 75% of which are undocumented [1]. With no legal protection, to the fields they go.

Seeing a photo of a Mixtec farmworker holding a child in front of a tent and seeing a photo of a migrant farmworker nursing her baby in a tent, one would be hard pressed to know which photo was taken in 1936 and which was taken in 2021. Small farmers have had to make big sacrifices during the pandemic. Healthcare is dire. Racism has devastated Latino farmworkers during the outbreak. Yet dignity has not yet been quite wiped out.

What would Steinbeck have written today about California’s farmworkers? Reading The Harvest Gypsies is reading the past while it occurs in the present: a frightening damning of how little we’ve come in the green fields of California.

It was this work that planted the seed from which The Grapes of Wrath (1939) sprung forth. The Grapes of Wrath is now considered one of the greatest American novels ever written. His Harvest Gypsies reportage gave him information and particulars of farm life that would color not only his Pulitzer Prize-winning novel, but many of his other beloved works, including In Dubious Battle (1936) and Of Mice and Men (1937).

The articles were published daily from October 5 through 12, 1936. The first article gave readers a general introduction to the migrant farmworker and their plight. “There are at least 150,000 homeless migrants wandering up and down the state, and that is an army large enough to make it important to every person in the state.” He states later, “We find a curious attitude toward a group that makes our agriculture successful. The migrants are needed, and they are hated.”

Fast forward to today. California produces one third of the nation’s vegetables and nearly two thirds of all its fruits and nuts. About half of American farmworkers can be found in California. One third are women, ranging in age from teenagers to well into their 60s. 80% of farmworker women say they’ve experienced sexual harassment. There are 400,000 children working in California's fields. Farmworker children have a 1 in 10 chance of graduating from high school [2]. Needed, they are, and if not hated, cast aside.

Steinbeck’s second article went into the camps themselves, describing them and the families that lived in them. “From a distance it looks like a city dump, and well it may, for city dumps are the sources for the material of which it is built.” A litter of rags. Scrap iron. Paper. “Houses built of weeds.” But, Steinbeck writes, “there is still pride in this family.” But, also, Steinbeck writes, “here, in the faces of the husband and his wife, you begin to see an expression you will notice on every face, not worry, but absolute terror of the starvation that crowds against the borders of the camp.”

Have those borders been erased today? No. The median income for a farmworking family of color: $13,000 [3]. For a single person household, the 2020 federal poverty line: $12,760. Farmworkers, too poor to pay for much else, live in ramshackle cottages, or their cars, or worse. In San Diego County, many strawberry farmers sleep in ravines.

The third article described the systems of oppression that let large farm operations have complete control over the lives of the migrant workers. “The attitude of the employer on a large ranch is one of hatred and suspicion...the workers are herded about like animals.” Big farms stayed big. Small farms and farmers got crushed.

A recent article in Bon Appetit was titled “I Hope We All Survive This Year and I’m Still Farming By the End of It.” Another article, in the Los Angeles Times, mentions Vince Bernard, a small farmer growing citrus. With COVID there has been a decline in sales. With a decline in sales he’s having a hard time paying his water bills. Will he have to sacrifice some of his trees to make ends meet? He plans on praying.

Steinbeck’s fourth article characterized camps put together by the Resettlement Administration. The fifth article highlighted the lack of aid for migrant families, particularly healthcare. Steinbeck writes, “A man herded about, surrounded by armed guards, starved and forced to live in filth loses his dignity.”

These days, many farmworkers lack transportation, money, or time off from work to treat injuries or sickness, let alone preventative care. Fewer than half have insurance at all. Moreover, with the Trump Administration’s attempts at deporting undocumented immigrants, many farmworkers are fearful of checking in with doctors and hospitals. Add to that pesticides. The US EPA estimates 300,000 farmworkers are poisoned by pesticides yearly. Add to that climate change-induced wildfires. Add to that COVID-19. Additionally, the California Occupational Safety and Health Administration, designed to protect the health and safety of California’s workers, has the equivalent of one Spanish-speaking field inspector for every 192,308 Spanish-speaking workers. The average age of death for a migrant farmworker: 49-years-old [4, 5].

The sixth article Steinbeck wrote was on the treatment of workers, white and non-white. He writes bluntly, “The history of California’s importation and treatment of foreign labor is a disgraceful picture of greed and cruelty.” Immigrant labor, he surmised, was valued over white labor for two main reasons: immigrants accepted lower pay; immigrants tolerated worse treatment.

It continues. Take California’s Imperial County. It is 85% Hispanic and has one of the highest death rates in the country. This was before COVID. They’re triple the national death rate for COVID and more than double the next highest California county. Why? Decades-long unequal rights.

What can be done? Steinbeck concluded Harvest Gypsies with a seventh article. “In these communities,” he writes, “a spirit of cooperation and self-help should be encouraged so that by self-government and a returning social responsibility these people may be restored to the rank of citizens.” Steinbeck continues, “The expense of such projects should be borne by the Federal Government, by state and county governments, so that the community that requires the greatest number of seasonal workers should contribute to their well-being.”

Those words should be repeated today. The government must ensure workers are safe, have economic security, and an ability to take paid leave, particularly in regard to medical care. While the government works on those problems, immigration and prison reform included, what can John Q. Public do? Stay informed, be vocal, volunteer. Perhaps become a community organizer. They all—documented or not—deserve the care and resources that are supposed to be afforded to us all. Steinbeck might have said this in today’s newspaper, like he did in 1936: “The..migrants...are the best American stock, intelligent, resourceful.” They’ve got dignity not yet quite wiped out.

All photos courtesy of The Harvest Gypsies.