Read an Excerpt from The Life and Adventures of Santa Claus

Most people know L. Frank Baum as the author of the famous Wizard of Oz series, and for good reason—the story has been famous in pop culture for more than 120 years. However, L. Frank Baum's penchant for magical tales with whimsically-named characters goes beyond Dorothy and the Land of Oz—he also invented an original creation story for Santa Claus, one of the world's most beloved mythological figures.

Below, read from chapter four in The Life and Adventures of Santa Claus, in which "Neclaus" is born to a world of fairies, nymphs, and Knooks.

The Life and Adventures of Santa Claus

Another day found Necile’s bower the most popular place in the Forest. The nymphs clustered around her and the child that lay asleep in her lap, with expressions of curiosity and delight. Nor were they wanting in praises for the great Ak’s kindness in allowing Necile to keep the babe and to care for it. Even the Queen came to peer into the innocent childish face and to hold a helpless, chubby fist in her own fair hand.

“What shall we call him, Necile?” she asked, smiling. “He must have a name, you know?’

“Let him be called Claus,” answered Necile, “for that means ‘a little one.’”

“Rather let him be called Neclaus*,” returned the Queen, “for that will mean ‘Necile’s little one?”

The nymphs clapped their hands in delight, and Neclaus became the infant’s name, although Necile loved best to call him Claus, and in afterdays many of her sisters followed her example.

Necile gathered the softest moss in all the forest for Claus to lie upon, and she made his bed in her own bower. Of food the infant had no lack. The nymphs searched the forest for bell-udders, which grow upon the goa-tree and when opened are found to be filled with sweet milk. And the soft-eyed does willingly gave a share of their milk to support the little stranger, while Shiegra, the lioness, often crept stealthily into Necile’s bower and purred softly as she lay beside the babe and fed it.

So the little one flourished and grew big and sturdy day by day, while Necile taught him to speak and to walk and to play.

Related: The 12 Best Christmas Books to Read All Season Long

His thoughts and words were sweet and gentle, for the nymphs knew no evil and their hearts were pure and loving. He became the pet of the forest, for Ak’s decree had forbidden beast or reptile to molest him, and he walked fearlessly wherever his will guided him.

Presently the news reached the other immortals that the nymphs of Burzee had adopted a human infant, and that the act had been sanctioned by the great Ak. Therefore many of them came to visit the little stranger, looking upon him with much interest. First the Ryls, who are first cousins to the wood-nymphs, although so differently formed. For the Ryls are required to watch over the flowers and plants, as the nymphs watch over the forest trees. They search the wide world for the food required by the roots of the flowering plants, while the brilliant colors possessed by the full-blown flowers are due to the dyes placed in the soil by the Ryls, which are drawn through the little veins in the roots and the body of the plants, as they reach maturity. The Ryls are a busy people, for their flowers bloom and fade continually, but they are merry and light-hearted and are very popular with the other immortals.

Next came the Knooks, whose duty it is to watch over the beasts of the world, both gentle and wild. The Knooks have a hard time of it, since many of the beasts are ungovernable and rebel against restraint. But they know how to manage them, after all, and you will find that certain laws of the Knooks are obeyed by even the most ferocious animals. Their anxieties make the Knooks look old and worn and crooked, and their natures are a bit rough from associating with wild creatures continually; yet they are most useful to humanity and to the world in general, as their laws are the only laws the forest beasts recognize except those of the Master Woodsman.

Then there were the Fairies, the guardians of mankind, who were much interested in the adoption of Claus because their own laws forbade them to become familiar with their human charges. There are instances on record where the Fairies have shown themselves to human beings, and have even conversed with them; but they are supposed to guard the lives of mankind unseen and unknown, and if they favor some people more than others it is because these have won such distinction fairly, as the Fairies are very just and impartial. But the idea of adopting a child of men had never occurred to them because it was in every way opposed to their laws; so their curiosity was intense to behold the little stranger adopted by Necile and her sister nymphs.

Claus looked upon the immortals who thronged around him with fearless eyes and smiling lips. He rode laughingly upon the shoulders of the merry Ryls; he mischievously pulled the gray beards of the low-browed Knooks; he rested his curly head confidently upon the dainty bosom of the Fairy Queen herself. And the Ryls loved the sound of his laughter; the Knooks loved his courage; the Fairies loved his innocence.

The boy made friends of them all, and learned to know their laws intimately. No forest flower was trampled beneath his feet, lest the friendly Ryls should be grieved. He never interfered with the beasts of the forest, lest his friends the Knooks should become angry. The Fairies he loved dearly, but, knowing nothing of mankind, he could not understand that he was the only one of his race admitted to friendly intercourse with them.

Indeed, Claus came to consider that he alone, of all the forest people, had no like nor fellow. To him the forest was the world. He had no idea that millions of toiling, striving human creatures existed.

*Some people have spelled this name Nicklaus and others Nicolas, which is the reason that Santa Claus is still known in some lands as St. Nicolas. But, of course, Neclaus is his right name, and Claus the nickname given him by his adopted mother, the fair nymph Necile. 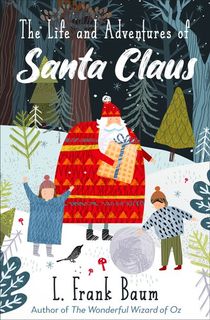