Have you ever wanted to go fishing in the desert?

In Salmon Fishing in the Yemen, absurdity and insightfulness go hand-in-hand. The first novel by author Paul Torday, Salmon Fishing in the Yemen is a brilliant, delightful read that highlights political hypocrisy and cultural differences through humor and satire. The novel won several awards for comic fiction and was adapted into a movie of the same name, starring Ewan McGregor and Emily Blunt.

The novel centers around the crazy dream of Muhammad bin Zaidi bani Tihama, a Yemeni sheikh: He wants to introduce the sport of salmon fishing to his home country of Yemen. The hitch in his plan? Yemen is covered with vast deserts. How on earth are fish to survive there?

Muhammad propositions Dr. Alfred Jones, a federal employee of the National Centre for Fisheries Excellence in London, to make his dream come true. Though Dr. Jones immediately dismisses the idea as ludicrous, he soon faces mounting pressure from British Parliament to please Muhammad and improve relations with Arab nations. Despite any initial reservations, Dr. Jones unwittingly embarks on the project.

Told through letters, journal entries, government correspondence, and other epistolary entries, this is a zany tale full of humor, absurdity, and some serious self-reflection.

Read an excerpt from Salmon Fishing in the Yemen, and then download the book.

Salmon Fishing in the Yemen 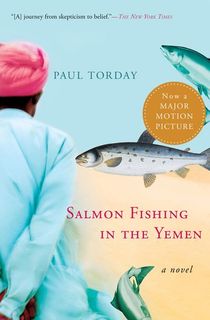 Tom
As you know the Yemen salmon project has received semiofficial support from the Foreign Office and from Number 10. You may be aware one of my colleagues has scoped the project following some guidance from me. He has now asked me to explore with the Environment Agency how best to procure live salmon for the project.
Please consider this correspondence at this stage as informal and off the record, but we are preparing a request for the agency to supply us with ten thousand live Atlantic salmon, for shipment to the Yemen some time next year (dates to be agreed).
Of course it is up to the agency to say how best this might be achieved, but I would have thought—if you don’t mind a suggestion from an old friend!—that you might consider netting an agreed percentage of the average salmon run from a number of the main English and Welsh rivers and transporting them to a collection centre we would set up for this specific purpose with specially designed holding tanks.

That way no one river would lose a significant proportion of its total catch, and I am sure most of the angling community would be delighted to contribute to such an innovative and groundbreaking project.
Of course I am contacting the Scottish Environment Protection Agency, the Scottish river boards and the Tweed Commissioners with a similar request. A meeting may be necessary to decide how many salmon are harvested from each river.

Want more comic fiction? Sign up for the Early Bird Books newsletter and get the best daily ebook deals delivered straight to your inbox.

I cannot think of a less acceptable request than the one you made to me in your last e-mail. Have you any idea what an outcry there would be within the angling community and amongst the owners of fisheries in England and Wales, let alone amongst my own colleagues, if you formally approached me along the lines you suggest? King Herod, when he suggested that the firstborn of every family in Palestine might be killed, could be regarded as launching a charm offensive, compared to NCFE’s proposal. You can have no idea of the depths of emotion felt by fishing clubs and anglers generally (let alone my colleagues in Fisheries) about the salmon run in their rivers, for which they feel a stronger attachment than I often think they do for their own children.

My life would not be worth living if this proposal of yours ever became public, not that I would for a minute contemplate stripping English rivers of native salmon so that they could be shipped to a Middle Eastern desert. You may recall that the mandate of this agency, and my department, is to protect the environment, and to conserve our fish stocks, not export them. I really cannot imagine anyone here at any level accepting such a request unless it was backed by an act of Parliament, and even then we’d probably all resign on the spot.

How on earth have you allowed yourself to become entangled in this affair?

SUBJECT: Re: Re: Yemen salmon

I was disappointed by your reply to my last e-mail, which I thought was a trifle flippant and even irrational, if you don’t mind me saying so. Perhaps you may have got the matter into perspective by now. Ten thousand salmon is not that many to sacrifice for a cause supported by the prime minister and that will do so much good for international relations. The loss of these fish can easily be replaced by production from one of your hatcheries.

I repeat, to ensure you get my point, this project has the support of the prime minister.

Then the prime minister had better send a couple of regiments as well, if he wants our salmon. In either case, over my dead body.

Related: 9 Travel Writings That Will Take You on a Journey

This novel features a large cast of characters, all of whom have a stake— however preposterous—in salmon being shipped to Yemen. In this excerpt, we see that fishermen guard salmon more fiercely than they protect their own families. The project’s far-reaching consequences have a chaotic domino effect in the UK.

Download the award-winning book for a fun, thought-provoking read.

Want more comic fiction? Sign up for the Early Bird Books newsletter and get the best daily ebook deals delivered straight to your inbox.

Featured still from "Salmon Fishing in the Yemen" via BBC Films