Secrets of a River Swimmer Is Guaranteed to Inspire You

Dive into an incredible story.

Every once in a while, we read a book that turns our world upside down. Life of Pi taught us the power of perspective; A Man Called Ove showed us what it means to be kind; The Alchemist made us realize that we shape our own destinies. And now, Secrets of a River Swimmer has taken us on another unexpected journey and shown us how important it is to hope. At least, that’s what author S.S. Turner says readers take away from the book.

“Hope is indeed at the heart of the novel’s journey,” Turner recently told Early Bird Books in an interview, “and the feedback I’ve received from most readers thus far is that they felt uplifted and more connected with elements of their own lives by the end of the novel.”

This sentiment is also shared by Heather Morris, the bestselling author of The Tattooist in Auschwitz. "S.S. Turner has written a profound story that is about all our lives,” says Morris. “He has found the connection that makes us all the same, while remaining unique. His words will resonate with every reader as they see themselves, find themselves embedded in them. You will not escape, you will not want to escape from the depth of your own world he reminds you is yours to be lived, to survive and thrive."

Of course, the start of the book is somewhat bleak. In the very first page, our narrator Freddy is staring at a cold, swift Scottish river, thinking about how this will be his “last day.” He jumps in, expecting to drown himself in the currents, but something strange happens. Rather than dying, Freddy sets off on a journey unlike anything he could have imagined. From there he meets a whole host of others who have similarly lost themselves, as we all have at some point or another. And together, they see if the river will carry them to where they wish to go.

A river is a fitting metaphor for the beginning of this book—after all, being under water feels like entering another world, and its swift current and bracing, cleansing waters carry Freddy to the next stage in his journey. Swimming in a river also brings up strong memories for Turner, who explained why Freddy’s journey begins in the water.

“A friend and I used to jump into the River Tweed every few weeks, including in the depths of Scottish winters, just to see where it took us,” explains Turner.

“The price of entry was intense pain as the cold water unceremoniously inflicted itself upon our bodies like icy daggers. And every time we immersed ourselves in the Tweed’s majestic waters we’d experience love, joy and fun in more beautiful ways than we could have imagined on dry land. We’d laugh like kids at the silliest little things. We’d feel euphoric to be accepted and free and alive. We’d meet fascinating characters alongside the river who were shocked and amused that two crazy humans were swimming so close to the enormous salmon. We even met a duke with a shotgun and an aversion to river swimmers. We’d have life-affirming conversations that put the world to rights, and that involved us speaking our truth to one another, and to the universe. In fact, every time we jumped into the river there was far more going on than either of us could comprehend. But one thing was clear: we always emerged from the river with newfound energy, clarity, and love for our lives. It was like pressing a reset button on life.”

The river certainly presses a reset button for Freddy. Initially he’s in a sort of limbo (we won’t spoil the magic entirely by getting any more specific), and then, when the river challenges him to decide whether or not he still wants to live, he’s fighting for his life again—and soon, having fun again too.

“And that’s why I wrote Secrets of a River Swimmer—to capture and immortalize the love, the fun, the joy, and the mysteries of the river’s world,” says Turner. “It was a joy to allow the book to go with the river’s flow away from everything that needed to be left behind, and towards a better future.”

While not all of us have the ability (or the fortitude) to jump into an icy river, the magic of storytelling gives everyone the ability to live vicariously through Freddy. Dive in and see where the waters take him—and you. 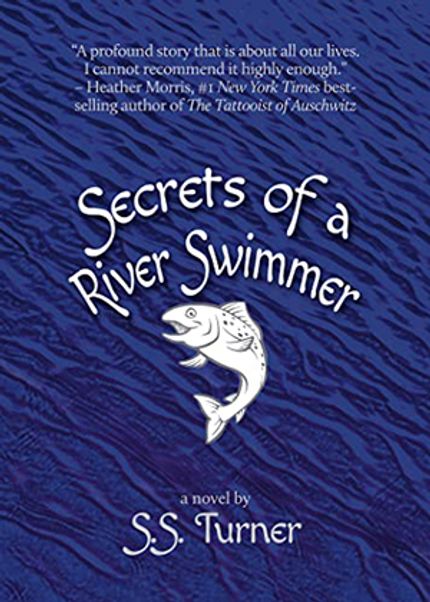 And if you’ve already been mesmerized by Secrets of a River Swimmer, keep an eye out for the next book Turner is writing, The Connection Game, currently due to be released toward the end of 2022.

Turner gave us a synopsis of the psychological thriller, and we’re certainly intrigued: a London family of four is forced to move into welfare housing after becoming victims of online fraud. Benny, the patriarch of the family, is furious, but calms himself by looking out their ground-level window and watching the feet pass by. But “the more he watches the feet, the more Benny believes the entire city is in serious danger,” explains Turner. “He convinces his children Will and Wendy to join his foot watching operation at the window, but his wife Belinda is concerned for his mental health.” Has Benny really stumbled onto something—or has he fabricated it all? You’ll have to wait until the end of the year to find out.