The 1967 piece on San Francisco hippies is included in the critically-acclaimed collection of the same name.

“The center was not holding,” Didion wrote in 1967, opening what is now the iconic essay “Slouching Towards Bethlehem.” In the spring and summer of that year, Didion paid frequent visits to the Haights-Ashbury neighborhood of San Francisco—a microcosm of the “social hemorrhaging” that was then sweeping the nation. Hippiedom had changed; Americans were experiencing a strange sort of turmoil, most of all Didion herself. Believing that writing had become an “irrelevant act”—how could she possibly explain what was happening in words?—Didion went to the center of the chaos. There, she might be able to understand it, and to come to terms with it.

Related: On Joan Didion: Her Books, Life, and Legacy

Want more authors like Joan Didion? Sign up for the Early Bird Books newsletter and get the best daily ebook deals delivered straight to your inbox.

On assignment for The Saturday Evening Post, a 32-year-old Didion got up close and personal with the Haight's psychedelic hippies. These were primarily runaways and drug-users (and often both), who had fled overbearing parents or simply wanted to "stick it to the Man" by marching to the beat of their own drum. But their behavior and the “hemorrhaging” Didion describes in her piece can be unsettling: In one passage, she recounts meeting Susan, a tripping 5-year-old girl whose mother frequently dosed her with LSD. In another, she talks about a neglected young boy who nearly sets his house on fire. While shocking, Didion observed these incidents with her signature coolness.

What makes “Slouching Towards Bethlehem” even more fascinating is Didion’s technique—a kind of “new journalism” that creates a sense of menace and immediacy. Didion is never concerned with objectivity, but only with telling the story of the hippie movement as she sees it. She, herself, becomes so wholly immersed in the counterculture that it seems as though she might become a part of it.

Related: Joan Didion's The Last Thing He Wanted Is Coming to Netflix

“Slouching” was featured in a 1967 edition ofThe Saturday Evening Post and became the titular essay of her 1968 collection. Despite a steady journalism career and one lackluster novel, Slouching was the work that truly put Didion on the map.

The collection includes some of her other famous nonfiction pieces, many previously published in magazines. There's her famous Vogue essay “On Self-Respect” and “Goodbye to All That,” a farewell letter to youth and innocence that has become a touchpoint for any New York writer. Many of the other pieces solidified her as a figure of California. Altogether, Slouching Towards Bethlehem, the collection, turned the author into the Joan Didion we know and love today. 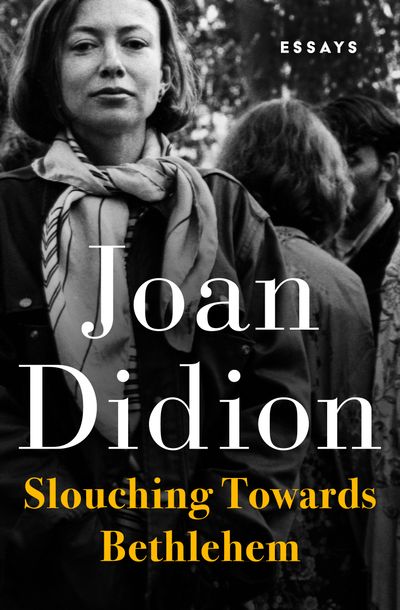